Which way will the markets be pulled this week?

Overview: Bad moon on the rise

Look’s like we’re in for nasty weather, One eye is taken for an eye

There’s a bad moon on the rise- Creedence Clearwater Revival

While the US enjoyed a holiday on Friday

In a light trading environment US equities futures and the USD drifted lower while equities in Europe also ended the day in negative territory. AUD and NZD extended their gains and closed higher on the week. Over the weekend, US and Victoria COVID-19 infections continue to rise while on the geopolitical front the Australian government warned retaliatory measures from China should be expected given Australia’s position on Hong Kong and the US sends Aircraft Carriers to South China Sea.

Friday’s overnight price action was pretty muted given the US was out enjoying a long weekend celebrating Independence day. Main European equities indices ended the day down between -0.5% and 1.3% with a Bloomberg report suggesting a potential rift within the ECB weighing on sentiment (more below). In a light trading environment US equity futures drifted lower with the S&P 500  mini down 0.43%. That said the soft end to the week was no enough to derail what was a very solid week for equity markets around the globe. China’s equity market was the outperformer with the  Shanghai Composite up 5.82%, US equity markets were not too far behind, up around 4% and our own S&P/ASX 200 gained 2.6%.

Movement in currencies were relatively subdued, commodity linked currencies outperformed and the USD drifted lower. Indeed a softer USD was the theme for the week with BBDXY recording its first weekly drop since early June. The AUD closed the week at 0.6939, up over  1% over the week and kiwi did even better gaining 1.68%, closing the week not far off its high for the week around 0.6530. AUD opens the week at 0.6932 and NZD at 0.6523.

News over the weekend has perhaps played into to the small tinge of AUD weakness at the open (with NZD drifting lower in sympathy). Victoria virus news have not been great while the Morrison government also warned that we should expect retaliatory measures from China given Australia’s position on Hong Kong. 182 new COVID-19 cases were recorded in Victoria since our last note on Friday morning. Announcing the new figures yesterday, Victoria’s Premier Daniel Andrews warned worse was yet to come. Lockdown have been increased across Melbourne suburbs to contain the spread.

In addition to COVID-19 stats

Traders are also going to be watching Australia-China geopolitical tensions. The Weekend Australian reported that the Australian government expects further retaliatory tariff increases from China after PM Morrison’s offer of a safe haven to Hong Kong citizens. Following increased tariffs on barley and beef, other products such as milk powder might be included. On Wednesday, the government is expected to discuss a plan to consider fast-tracking resettlement for Hong Kong citizens through the skilled visa program at a cabinet meeting.

In yet another sign of more tensions between the US and China, the WSJ reports the US navy is sending two Aircraft Carriers to South China Sea for exercises to coincide with China’s plans to hold drills in the area. US officials said they wanted to challenge what they called Beijing’s unlawful territorial claims. “The purpose is to show an unambiguous signal to our partners and allies that we are committed to regional security and stability,” said Rear Adm. George M. Wikoff, commander of the strike group led by the USS Ronald Reagan, in an interview

US COVID-19 infections continue to set new records in many states around the US. Yesterday the NYT reported cases are trending upward in 39 states, Florida announced more than 11,400 new cases, its fourth record in 10 days and the second time in three days that the daily count was over 10,000. South Carolina hit a record on Friday only to break it on Saturday with more than 1,850 new cases.

The risk on mood in markets was supported by better than expected data around the globe with China’s PMIs and the US labour market the highlights. For now the positive data surprises and huge fiscal and monetary stimulus are the overwhelming forces. But the increase in COVID-19 infections, not just in the US, means that they need to be closely monitor, the introduction of more sever containment measures has the potential to derail the positive vibes in markets. For instance, this morning, Bloomberg reports a top Houston-area county official pleaded with Texas state leaders to let him issue a stay-at-home order. Geopolitical tensions are also on the rise and there is no sign an ease in tensions is a consideration over the near term.

Lastly a bit more on the ECB news on Friday

Bloomberg reported that ECB Governing Council members face a potential rift over how much their emergency-bond purchase programme should stay weighted toward weaker countries such as Italy. The capital key rule links bond buying programmes to the relative size of each economy, but recent purchases have been skewed towards Italy in response to the surge in bond rates for one of the worst-virus affected countries. The news story shouldn’t really surprise anyone who closely follows the ECB and there was little impact on markets. More important for the EUR over the next month or so will be whether EU members can agree on the terms of the Recovery Fund, which is required to inject some fiscal stimulus support for the region. 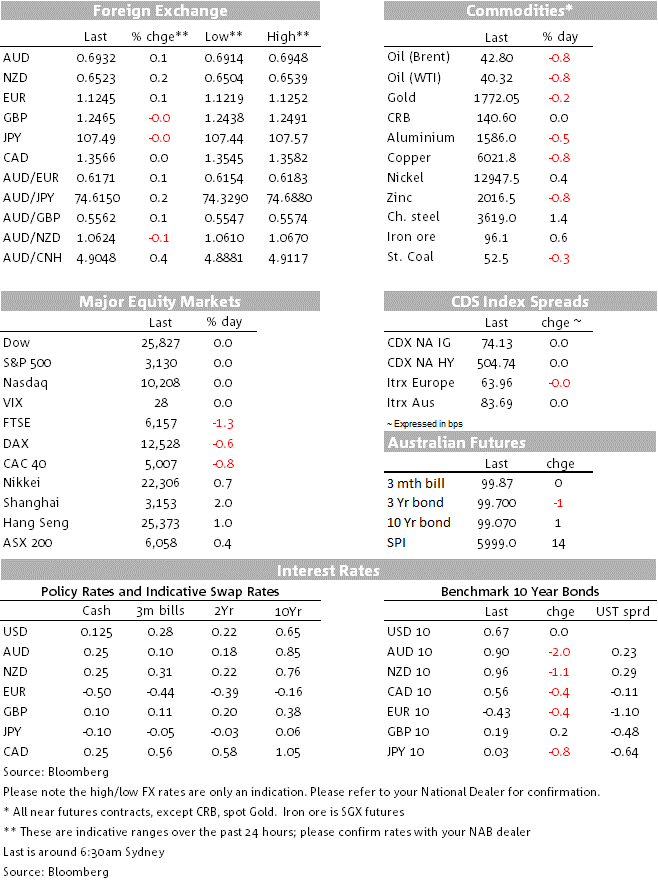