Shares rose higher on further hope that trade talks with China will see a roll back in existing tariffs.

While song titles are a normal staple of the daily, President Trump takes the honours today, summing up overnight sentiment in a 9 word tweet: “Stock Market up big today. A New Record. Enjoy!”. Prompting that move in equities was further optimism on an imminent US-China trade deal after China’s Commerce Ministry stated the US had agreed in principle to remove some of the tariffs as part of a deal – this going beyond the initial truce that the market had been pricing in. That optimism saw stocks reach record highs with the S&P500 +0.3% to 3,087, along with brutal sell-off in bonds with US 10yr yields +9.6bps to 1.92% (high of 1.97%), while US Fed cut pricing for 2020 now sits closer to 50/50 rather than the certainty it was seen as last week. USD/CNH was unsurprisingly sharply lower, -0.8% and below 7 at 6.97 with the AUD holding onto its China proxy role +0.3% to 0.6901. Curbing some of the moves as Sydney opens are conflicting reports on the US’ appetite to rollback tariffs. The other event worth highlighting overnight was a split BoE decision with two out of nine wanting a cut – GBP underperformed -0.3% to 1.2825. As for the USD, it rose 0.2% with improving risk appetite seeing USD/JPY +0.4% to 109.29, while EUR fell -0.2% in sync with GBP.

First to trade news in detail

As London opened last night China’s Commerce Ministry spokesperson stated that China and the US had agreed in principle to remove some of the tariffs as part of a trade deal: “both sides should roll back existing additional tariffs in the same proportion simultaneously based on the content of the agreement…This is what [the two sides] agreed on following careful and constructive negotiations over the past two weeks”. Notably there has been little comment from the White House on this, with media reports mixed on the US take. Bloomberg cited some US sources as confirming China’s comments, while Reuters suggests no decision on a tariff rollback has been made. There is also the possibility that what China has described as a tariff rollback is interpreted by the US as being part of a compliance mechanism in any phase 1 deal.

Either way though the elevation of discussion from a trade truce to a possible tariff rollback is important and suggests both China and the US have come under pressure to seal a deal. Highlighting this was China’s public trial of fentanyl traffickers, while in the US state governor races revealed potential re-election problems in suburban America. Kentucky and Virginia went Democrat, while the blue collar parts of Pennsylvania swung Democrat and a county in Delaware was won by the Democrats for the first time in 150 years (see a good Politico article on it). Adding to perceptions of tariff fatigue in the US administration was the EU’s Juncker who said there won’t be any auto tariffs on EU cars: “he won’t do it…you are speaking to a fully informed man”.

With the S&P500 up 0.3% and hitting a fresh record high. Expectations for further Fed easing have also receded sharply – a cut in 2020 is now seen as a 50/50 rather than the certainty it was last week. With rate cut expectations being wound back, the focus for equities will likely now start to shift towards valuations. For bonds, US Treasury yields traded in a 17 points range (1.80-1.97%), with yields ending 9.6bps higher to 1.92%.

The other main event last night

Was the Bank of England which had its first split decision since June 2018 in voting to keep rates unchanged. There were two dissenters out of nine voters, including former hawk Saunders who cited threats to the outlook and signs that the labour market might be starting to deteriorate. The dovish bias form the BoE has seen markets price in a greater chance of a cut by end of 2020 with UK bonds also lagging the global selloff with UK 10yr Gilts +7.8bps to 0.79% while GBP/USD fell -0.3% to 1.2825.

Datawise it was a quiet night overnight

With only German Industrial Production for September of note. Production fell slightly more than expected at -0.6% m/m against -0.4% expected and confirming the drag coming from the manufacturing sector. Going forward however, a tentative pick-up in orders seen earlier in the week is giving some hope. A possible US-China trade deal should also give optimism to Europe given German exports make up around 47% of German GDP.

The ripper Trade Balance had little impact on the AUD. The trade surplus was $7.2bn against $5.1bn expected with the beat mostly driven by upward revisions. As for the rest of today, the RBA Statement on Monetary Policy is coming up, though is likely to be less of a surprise given the RBA revealed its major forecast changes at Tuesday’s board meeting (see Coming Up for details).

Domestically the RBA Statement on Monetary Policy is the highlight, followed later in Asia with the Chinese Trade Balance. Mostly quiet elsewhere with only US Consumer Confidence and Canadian Employment data likely to garner attention: 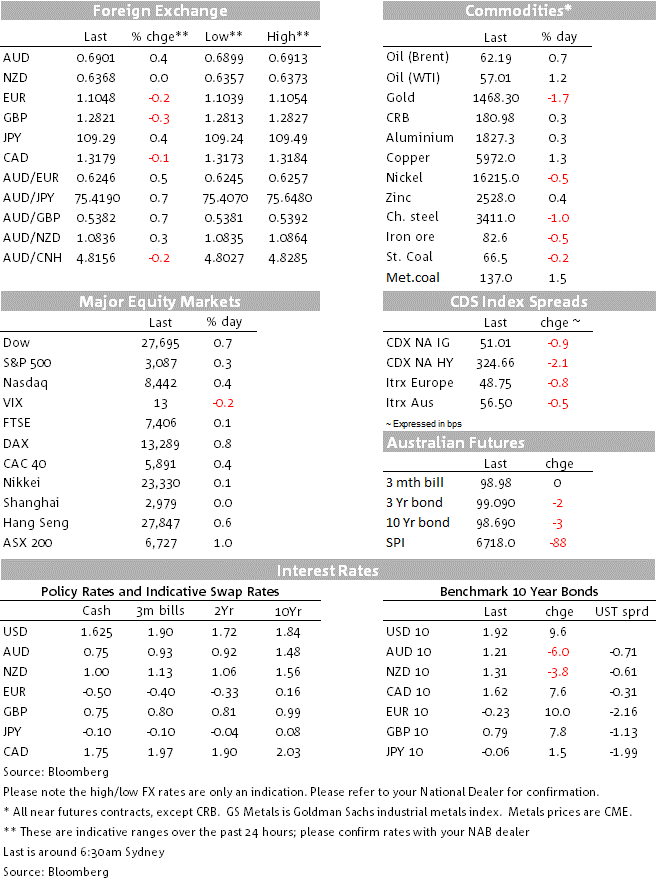 There isn’t an immense amount of confidence about how quickly economies will recover.