There was speculation that the Fed would taper sooner rather than later.

Who got the lighter, let’s spark the fire
Let’s go hot let’s go hot hot as can go- Gwen Stefani

Strong US data releases overnight sparked a bit of volatility in markets. The ISM Services, ADP and jobless claims beat expectations, increasing the prospect for a solid non-farm payrolls print tonight alongside the chances of a sooner rather than later Fed tapering talk. The five-year part of the curve led the rise in UST yields with the USD stronger across the board. The pullback in equities has been a double whammy for the AUD and NZD (higher UST yields and weaker risk appetite) with the antipodean pairs the overnight underperformers. Prospect of a Biden Corporate tax compromise helped US equities recover somewhat, but with little benefit to the AUD and NZD.

US data releases overnight reaffirmed the US economic recovery remains on a strong footing. That said the pattern of solid US data releases is not new news, yet overnight data releases triggered a decent market reaction. To your humble scribe, the difference this time reflects the heightened degree of market sensitivity around the outlook for the US labour market and Fed tapering implications, especially with non-farm payrolls out tonight.

Regardless of the reliability of the ADP report as guide for nonfarm payrolls, the solid ADP print overnight alongside another solid ISM services print suggest the US labour market should recover at a solid pace over coming month.  The ADP report for private sector payrolls was an impressive 978k in May, although ADP numbers have a mixed record as predictors for nonfarm payrolls, the ADP model uses payroll data from the previous month, so the underwhelming  218K nonfarm payrolls print in April  in theory was a  constraint to the May ADP reading. So, on face value the May ADP report points to a decent pick up in job growth. Critiques on the other hand would note that the ADP numbers have lagged the BLS data in the current economic recovery, so the May print could just be a big catch up.

Along with another decent decline in jobless claims (385K from 405K vs 387 exp.) the US ISM Services index hit an all-time (since 1997) high of 64 in May , above the market consensus.  Consistent with other business surveys and yesterday’s Fed Beige Book, pricing pressures remained intense, with the ‘Prices Paid’ component hitting its second highest level on record.  Ahead of the nonfarm payrolls report tonight, the employment component slipped from 58.8 to 55.3, although this is a level still consistent with brisk job growth.  The accompanying ISM statement observed “the rate of expansion is very strong” in the services sector, as the economy reopens, while highlighting capacity constraints and supply shortages.  The ISM Manufacturing survey, which has a longer history, is near its highest level since the mid-1980s.

Reaction to the US data releases triggered a sell off in US Treasuries with the move up in yields led by the five yea part of the curve, up 4.7bps to 0.8397% while the 10y Note climbed 4bps to 1.6250%. The USD was also a big mover, up ~0.65% in index terms. The USD appreciation started after the ADP employment report, gathering momentum after the ISM Services index was released an hour and a half later.  Notwithstanding its rebound overnight, the BBDXY remains close to a three-year low.

Looking at G10 pairs, the USD is up between 0.50 % and 1.50% with the antipodean pairs the big underperformers, AUD down 1.32 % to 0.7658 and NZD -1.48% to 0.7146 . For the AUD and NZD it has been a double whammy as higher UST yields lifted the USD while the increase in risk aversion, as evident by the move lower in equities, was a second punch with both antipodean currencies showing their higher degree of sensitivity to risk appetite. The break below 77c does have some technical importance for the AUD, given it has been largely contained within a 77c to 78c range since early March. That said the solid macro backdrop supported by elevated commodity prices still suggest to us the AUD and NZD for that matter should trade higher.

In other currencies, the GBP has outperformed overnight (falling 0.5% to around 1.41), underpinned by expectations for a sharp recovery in the UK activity as the economy reopens.  The final release of the UK services PMI overnight was slightly higher than the ‘flash’ estimate, showing services sector activity at its highest level since 1997.  The JPY and EUR fell 0.5-0.6% overnight, with USD/JPY breaking above the 110 mark amidst higher US Treasury yields.  The EUR is trading at a three-week low around 1.2125.

Equity markets were already on the back foot before the US data releases, with the market seemingly growing somewhat more wary about the prospect of a Fed tapering discussion commencing soon.  Shortly after the cash market open, the S&P500 and NASDAQ were trading down 1% and 1.5% respectively.  However, reports that Biden was considering dumping his proposal to raise the corporate tax rate from 21% to 28% (see below) lifted sentiment.  The S&P500 has ended the day at -0.36% while the NASDAQ, which is typically more sensitive to higher interest rates, ended the day down 1.03%.

Media reports note President Biden has pitched to Republicans the idea of a 15% minimum tax on US corporations , along with strengthened IRS enforcement efforts, as a way to fund a bipartisan infrastructure package, according to a person familiar with the discussions. Importantly this new proposal could mean President Biden s proposal to raise the headline corporate income rate to 28% from 21%, may be put aside although there is still the possibility the Presdident may persue a lift in the corportate tax via a budget reconciliation process.

It remains to be seen whether the compromises will be enough to get a bipartisan deal over the line Republican senate leader McConnell said he was hopeful for a bipartisan deal and “maybe” the $1t size could be reached, although there remain differences between the two sides that need to be ironed out.

Finally Fed speaker were also out tonight and is worth noting FOMC members are slowly edging towards the need to start thinking about talking about tapering . This morning Fed Williams has seemingly join the party noting that  “Now is not the time for the Federal Reserve to adjust its bond-buying program, though it makes sense for U.S. central bankers to be talking through options for the future.”. Meanwhile Fed Bullard said the US labour market might be tighter than suggested by the current unemployment rate, and Dallas Fed Kaplan said he favours tapering the central bank’s mortgage-backed securities purchases because the housing market doesn’t need the support. 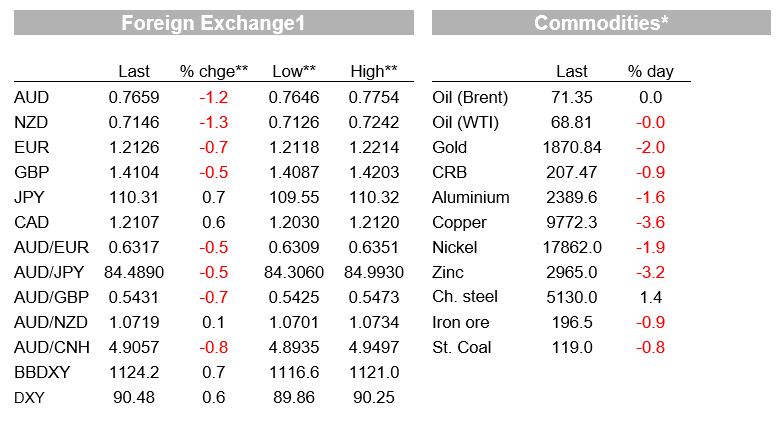