The markets have moved very little today as investors contemplate the next steps in the tariff battle between the US and China. Even the EU response, with tariffs to follow on Harleys, Levis and Bourbon, did little to stir a response.

In what has been a relatively quiet session, in terms of news and data releases, equity markets have had a steady to positive night, core bond yields are a little bit higher with US Treasury yields leading the way and the USD is steady, retaining the gains from the previous day. In Sintra, Portugal, the talk of the town (I was thinking of Jack Johnson’s mellow tune, but the Pretenders 1980’s hit could be an option too) has been the unanimous concern by major Central Bank Chiefs around current trade tensions between the US and the rest of the world and there was also a consensus view that the current environment of low inflation is likely persist for some time. Notwithstanding the steadiness in markets, commodity linked currencies had another down day with NZD leading the way ahead of New Zeeland’s Q1 GDP data this morning. Meanwhile, GBP is little changed despite the fact that PM May narrowly managed to fend off Tory rebels defeating the government on the ‘meaningful say’ amendment to the EU withdrawal bill (… and somewhat disappointingly Billy Idol’s great hit “Rebel Yell” will have to wait for another day to star as a Market Today tittle!)

So the two take aways from the Crème de la crème of Central Banks Chiefs panel gathering which included Fed Chair Powell, ECB President Draghi, BoJ Governor Kuroda, and our very own RBA Governor Lowe was the broad consensus view of concerns over the potential impact to the economic outlook from ongoing  trade tensions between the US and the rest of the world.  Fed Powell noted that  ‘changes in trade policy could cause us to have to question the outlook’. Governor Lowe called the trade issues ‘incredibly worrying, while Draghi said ‘There have been lessons one can learn from the past. They are all negative.’ Kuroda said ‘this is a matter of great concern.’.

Meanwhile on inflation Governor Lowe led the discussion noting that “The system looks less inflation prone than it once was,” adding that  “We just need to accept inflation will be lower for a while.”. Fed Powell also noted that  in the case of the US, structural issues such as higher levels of education and better anchored inflation expectations suggest that low unemployment was less likely to trigger substantial wage growth than in the past. Still, ECB president emphasised that in Europe, “We see unit labour costs are on an upward path,”. Fed Powell also added that “With unemployment low and expected to decline further, inflation close to our objective and the risks to the outlook roughly balanced, the case for continued gradual increases in the federal funds rate is strong,”

The latter comments from Fed Powell along with a positive US equity opening contributed to a small uptick in US Treasury yields overnight while the impact from the Fed Chair’s remarks on the USD was less notable. Ahead of the US open, US Treasuries where essentially marking time but as the US session unfold US Treasury yields rose steadily with the move led by the back end of the curve. 10y UST yields now trade at 2.93% ( up 3bps) and the 2y rate trades at 2.566% (+1.4bps).Yesterday the  2y10y UST curve traded down to a low of 34.5bps and now the curve trades at 37.5bps.

Looking at equities in more detail, while the Dow and S&P500 are still struggling amid ongoing US-Sino trade tensions, technology shares and the NASDAQ continue edge higher (+0.72%) with the tech index recording yet another all-time high. No concrete new news on the trade front has been treated as good news with European equities recording their first positive day for the week, although the CAC40 still closed in negative territory. German Automakers have reportedly told the US they would accept the abolition of EU-US car import tariffs in order to avoid the threat of Trump’s 25% tariff on car imports, the offer however comes with a catch as it would require the US to stop its current 25% tariff on light trucks.

So amid a steady risk environment and higher US Treasury yields the USD has retained its gains from the previous day and the DXY Index has consolidated just above the 95 mark. The steadiness in the USD has come about by a mixed performance in G10 currencies, European currencies are flat and or a smidgen higher, EUR is essentially unchanged at 1.1575 while NOK +0.27% and SEK +0.20% are the big winners. Meanwhile commodity linked currencies have underperformed with NZD leading the declines, ahead of  today’s NZ Q1 GDP report. The Kiwi is  down 0.33% and currently trading at 0.6864. Our BNZ colleagues note the NZD had little reaction to yesterday’s benign balance of payments data although its details warned of downside growth risks and combined with yesterday’s mild dip in consumer confidence adds to near term growth concerns stemming from already weak business confidence.

AUD is currently trading at 0.7371, a few bps lower relative to yesterday’s opening levels. Although no news on the trade front is probably good news for the AUD, the precarious EM markets position remains a thorn for the currency and now we also need to add soft commodities performance to the AUD’s concerns. Oil prices remain volatile ahead of Friday’s OPEC meeting amid mixed reports overnight. Iran’s oil minister Bijan Zanganeh said he did not believe an agreement to relax production cuts — first agreed nearly two years ago amid a global supply glut — could be reached at the oil cartel’s meeting. But Opec secretary-general Mohammed Barkindo and other ministers said they still expect a consensus to be reached. Brent closed the day down 0.95% meanwhile metal prices and bulk commodities had another soft day ( Copper -0.2%, iron ore -0.44%). For now the AUD continues to find support above the 0.7330 support level, but in our view the aussie still looks vulnerable to the downside.

Last word on the GBP, the pair now trades at 1.3172, little changed on the day despite changed despite the fact that PM May narrowly managed to fend off Tory rebels defeating the government on the ‘meaningful say’ amendment to the EU withdrawal bill. The result means the Brexiteers will be happy that the government’s hands will not be tied in EU negotiations and thereby there should be no challenge to May from that side (GBP positive). Still leaves many questions though – and key Customs Union vote is the next political risk event for the currency. 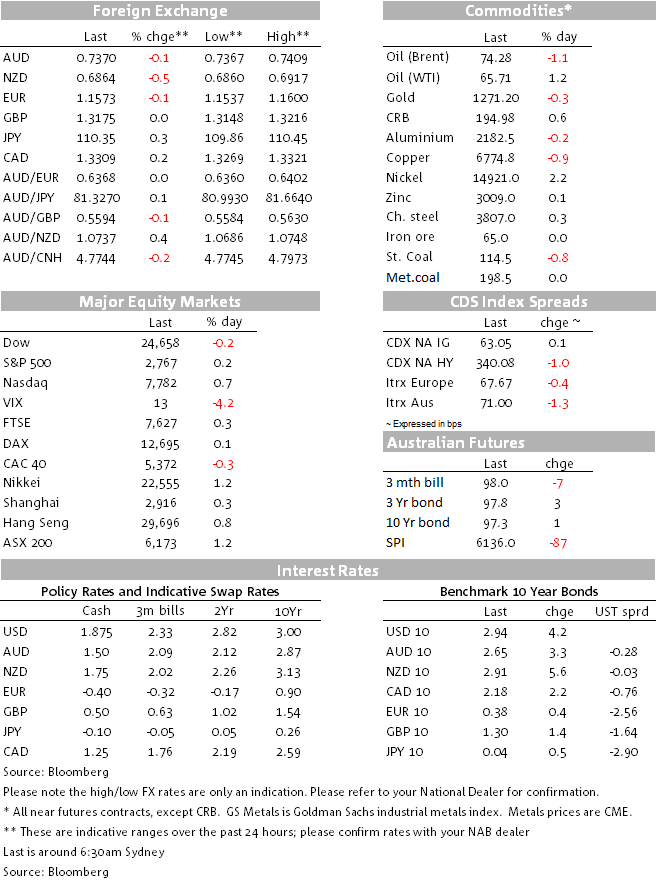