…if the incoming data were to show a persistent shortfall in inflation below our 2 percent objective or were it to indicate that global economic and financial developments present a material downside risk to our baseline outlook, then these are developments that the Committee would take into account in assessing the appropriate stance for monetary policy. Richard Clarida, Fed Vice Chair

Richard Clarida is currently regarded as the Fed official to listen to after Chairman Powell and his speech to the Economic Club of New York a few hours ago has served to reinforce prevailing market expectations that the Fed will be easing in the second half of this year. This has seen further inversion of the (3m/10y) US yield curve, at -15bps from -2bp at the start of the week, with 10 year Treasury yields losing 4.5bps from Wednesday’s NY close to sit at 2.217%.

What the Clarida’s comments have done is clarify in many people’s minds the answer to the questions of whether low inflation proving more than transitory would itself be enough to get the Fed to ease – the answer appears to be ‘yes’ (and note too Clarida added that longer-term inflation expectations were “at the low end of a range that I consider consistent with our price stability mandate”;  or where a downgrading of growth expectations alone could also be enough – and where the answer also appears to be ‘yes’. Of note on the latter is Clarida’s reference to the risk from global economic and financial developments as the potential source of downside economic risks – a thinly veiled reference to the impact escalation for the Sino-US tariffs war and other facets of the trade dispute could have.

Equities have a pretty quiet night, the S&P500 meandering either side of unchanged and closing +0.2%, with similar gains for other indices, a whole raft of USD economic data failing to resonate much.  US Q1 GDP was revised down by 0.1% to 3.0%, largely on a 0.1% downward revision to the contribution to growth from investors (0.6% versus 0.7% in the Advance release).  More pertinent and relevant to the decline in US yields alongside the influence of Clarida’s comments is that the core PCE deflator was revised down by a chunky 0.3% to just 1.0% from 1.3%

The April trade balance was little changed on March at -$72.1bn versus -$71.9bn in March and close to expectations, while wholesale inventories rose by 0.7% against 0.1% expected, implying a stronger start to Q3 (and hence GDP positive) against expectations that the strong Q1 result would see some pay-back in Q2.  Pending home sales fell by 1.%% after the strong 3.9% rise in March while weekly initial jobless claims remained low at 215k versus 2112k last week.

Aside from the further big falls in US yields, the other main market price action overnight has been oil, WTI crude 3.9% or $2.31 lower and Brent down 4.31% or $2.99. This is after the Energy Information Administration (EIA) reported US crude stocks fell by less than expected last week while gasoline stocks posted another hefty build in front of the Memorial day weekend (the official start of the ‘driving season’).  Crude inventories fell by 282,000 compared to an expected fall of 857,000 and the earlier American Petroleum Institute estimate of a 5.3mn barrel draw.  Elsewhere in commodities aluminium (-0.6%) copper (-0.6%) and Chinese steel prices (-1.0% are lower though iron ore continues to hold in, up 0.1% to a new high of $98.72 a tonne.

Very little to say about currencies, save that the USD is holding firm back close to last week’s highs in DXY terms (98.17 vs. 98.35 last Thursday and 0.6% up on the week so far). Slippage in GBP and the EUR the main sources of support.  This despite the latest fall in yields (and decline in yield spreads with 10yr Bunds up by 0.4%) and it not being a ‘risk-off environment. CAD has been the among the best  performing major currencies (+0.14%) some support coming from deputy BoC Governor Wilkin’s comments that rates are still deemed accommodative and that the Canadian economy is expected to gain speed though the year. US House speaker Nancy Pelosi has just been out saying  President Trump’s decision to formally notify Congress that its moving forward with its plan to get USMCA approved is ‘not a positive step’. This hasn’t hurt CAD – neither has the drop in oil prices – but has taken the wind out of the sails of earlier MXN gains to leave the latter flat on the day. Lower oil prices have hurt NOK, the worse G10 currency of the last 25 hours.

AUD is very slightly weaker but still holding above 0.69 (0.6910).  Yesterday’s Q1 CAPEX data showed firms’ capital spending was weaker than expected, recording a 1.7% fall. Equipment investment, which feeds into Q1GDP, was also weak, declining 0.5% against our expectation of a 1.3% rise. The equipment investment figures imply broadly no contribution to GDP, instead of the 0.05pp contribution we had factored in. This poses a slight downside risk to our Q1 GDP forecast of 0.5%, although there are more partials to come (note that the RBA’s implied forecast for Q1 is 0.6%).

Residential building approvals also fell by 4.7% in April (NAB: -5%; market: flat), as both house and apartment approvals continued to fall. There was no sign of stabilisation in the April data as downtrend in house approvals accelerated, falling in trend terms at 1.9% per month. Reflecting the weakness in approvals, residential investment has fallen for two consecutive quarters. NAB and the RBA expect peak-to-trough falls of 18% and 15%, respectively, through to the end of 2020 as the apartment construction pipeline is worked through.

Of some note is that neither of these weaker than expected releases hurt the AUD, testament to a lot of bad news currently being priced into the currency.

China Official PMIs at 11:00 AEST the main draw this morning where the manufacturing version is seen dipping below 50 (49.9 from 50.1) and the services version unchanged at 54.3.

In Australia its RBA April credit data (expected 0.3% for the headline change) while Japan has unemployment, Tokyo CPI, industrial production and retail sales. 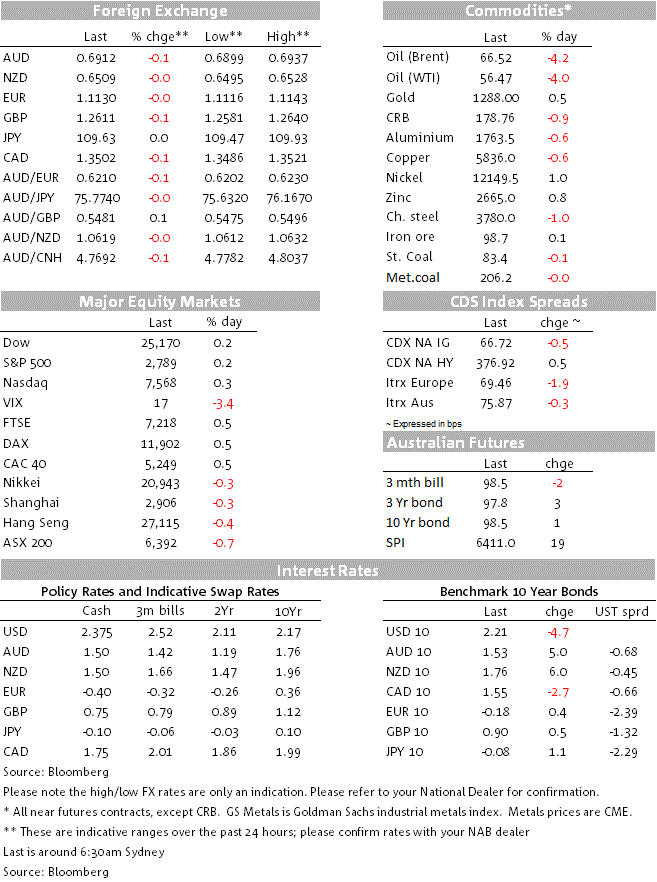