What will be the impact of a prolonged trade war? Is it bad news for the Aussie dollar?

Overview: The heat is on

President Trump turned the heat on again on Friday, threatening to increase trade protectionist measures against China, calling out currency manipulators and also had another go at the Fed for raising rates while others continue to ease (see below for a full tweet recount). Kudlow, Trump’s economic adviser, noted the November election will not stop the President on trade issues adding that Trump sees equities as no barrier given they are 30%/40% higher.

The above tweet/remarks triggered a broad based USD sell off during Friday’s overnight session and a steepening of the UST curve led by the back end of the curve. Speculation over BoJ policy tweaks help the yen and also played a role in the move higher in UST yields, strong data supported the CAD while the soft USD backdrop and gains in commodities helped the NZD move back above 68c and the AUD back above 74c. US equities ended the day marginally lower, European equities closed mostly weaker and earlier in the session, after 5 negative consecutive days, the Shanghai Composite gained over 2%.

Ahead of an important week of trade negotiations between the US and Europe, President Trump has sent a clear signal that he is not going to yield on his demands.  The outcome of Trump/Juncker tariff meeting on Wednesday will be quite binary for risk sentiment. The President’s remarks also make it very clear he has a distaste for a stronger dollar, effectively limiting the greenback’s ability to perform, at least near term. The CNY fixing on Monday (after a soft Friday for the USD and recovery in CNY)  will be important for the AUD at the start of the week before focus shifts towards Australia’s Q2 CPI release on Wednesday morning with markets and NAB expecting solid prints for both the headline and core readings.

US equities posted small negative returns on Friday, losses in Europe ranged between 0.07% and 0.98% with the DAX the big loser and not helped by Chancellor Merkel’s remark that trade tensions are a “very serious situation”. Encouragingly for Asia/EM, the Shanghai composite ended a five day losing streak closing Friday with gains over 2%.

President Trump’s disparaging remarks for a strong USD look to have capped any potential gains for the greenback near term. After flirting with the idea of making a new year to date high on Thursday, the DXY index is down more than 1%, closing the week at 94.62. That said, idiosyncratic issues in other currencies have also played into the weaker USD narrative.

On Friday, a Reuters report suggested the BOJ is likely to debate policy changes at this month’s meeting. The Bank may discuss adjustments to the way it buys JGBs and ETFs to mitigate market distortions. However, the emphasis of any changes is being portrayed as step for policy sustainability, not tightening.

In a classic pattern of shoot first and ask questions later, reaction to the report gave a boost to the yen, probably not helped by a short squeeze on USD/JPY longs established in the prior week, USD/JPY closed the week at ¥111.44, just above key technical support levels. Strong CPI and Retail sales figures dragged USD/CAD from a high of 1.3290 to 1.3120 before closing the week at 1.3143. The soft USD backdrop and gains in commodities helped the NZD move back above 68c and the AUD back above 74c.Both antipodean currencies’ remain confined to their recent tight ranges.

The UST curve steepened on Friday, led by a selloff in the back end of the curve with reports of a block sale of 2605 ultra-long bond futures seemingly a factor at play. The BoJ reports led to a 5bp rise in the 10 year Japanese government bond future during US trading hours, an unusually large move for Japanese interest rates.

The Japanese moves contributed to a steepening in the US yield curve, with the 10 year Treasury yield up 4bps on the day to 2.89% while the 2 year yield was unchanged.Aside from Trump/Kudlow’s remarks it is interesting to note that pricing expectations for a Fed hike in December were little changed at 78% (using effective Fed Funds rate). The Fed is an independent central bank and is unlikely to be swayed from its tightening plans for this year, while many other central banks are constrained from raising interest rates by low inflation in their countries.

Copper led the gains in commodities on Friday, up over 2% helped by a softer USD and we would suggest the rebound in the Shanghai composite probably also helped sentiment. Oil and metal prices climbed close to 1.5% and gold gained 0.58%.

On the week, iron ore was the only main commodity that managed to scrape a small gain, Brent and lead closed down 3% and copper was -0.7%. 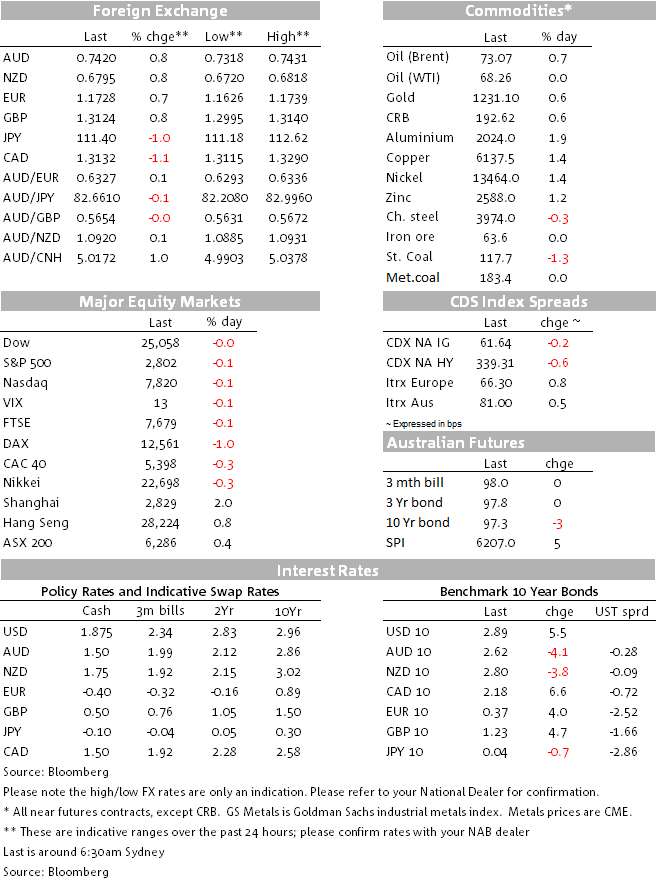