It’s been a session with mixed messages.

It has been a risk positive night with US equities mostly stronger notwithstanding higher than expected US CPI prints and news of a halt/delay of the Johnson and Johnson vaccine roll out. UST yield trade lower supported by a solid 30y Bond auction and the USD is broadly weaker with both AUD and NZD back to recent range highs.

Early in the overnight session, just after 9pm Sydney time, news that the US FDA and CDC called for an immediate pause in the use of Johnson and Johnson’s single-dose COVID19 vaccine hit the screens, triggering a short lived sell off in equities and move lower in core yields.  The decision to pause the US roll out follows the emergence of a rare blood clotting in six recipients (all six women between the ages of 18 and 48). As of April 12, more than 6.8m doses of the Johnson & Johnson vaccines have been administered in the US without any other serious adverse reactions reported.

The short-lived reaction in US equity futures and UST yields reflects the assessment that there is an abundance of other vaccines in the US thus this hiccup will have little impact there. However, the same cannot be said for other countries/regions, Johnson & Johnson has decided to proactively delay the rollout of its Covid-19 vaccine in Europe. The bloc had been expecting some 55m doses of the J&J vaccine this quarter as it ramps up vaccination efforts. The US and EU review/delay on the J&J vaccine are only expected to take a few days.

The other big news from the overnight session was the US March CPI report and after a run of subdued prints, both headline and core inflation readings printed higher in March beating expectations. US Core CPI increased 0.3% from February, the most in seven months, taking the annual reading to 1.6% while the headline climbed 0.6% in March taking the annual reading to 2.6%. The market took the stronger than expected inflation data in its stride, seemingly embracing the Fed rationale that the lift in prices is only likely to be transitory. Base effect has been one factor for the jump in the yoy numbers and a bigger impact is likely in April. The rise in the core inflation was driven by increases across an array of sectors, most notably lodging away from home, up a huge 3.8%, but with the US economy reopening and the consumer cashed up it remains to be seen how transitory and how large these price pressures are likely to be.

Looking at the US equity market, the net effect from the J&J vaccine and inflation news sees the NASDAQ lead the overnight gains with the IT heavy index up over 1% while the S&P 500 is up a more modest 0.33% with Utilities (1.22%) and Consumer discretionary ( 1.04%) the outperforming sectors while financial (-0.92%) and Consumer Staples  (-0.42%) are lagging behind. The Dow index is down 0.20%

The underperformance of financial is potentially linked to the flattening on the UST curve as well as some cautiousness ahead of earnings reports from some major US banks tonight (see below). After some wobbling on the news mentioned above, the 5y and 10y tenors are down 4 and 5bps respectively with the 10y Note now trading at 1.6145%. Interestingly  looking at the breakdown in the 10y nominal yield, the breakeven component is little changed at 2.32%, down 1bps after the higher CPI data release and therefore suggesting much higher inflation has already been priced by the market while the real rate component is down 4bps to -0.7148%, perhaps reflecting some concerns over the rosie US growth outlook. Longer dated UST yields were also supported by a solid 30y Bond auction  with the awarded yield of 2.32% just over 1bp lower than the when-issued yield and higher bid-cover than the recent run-rate.

The move lower in UST yields alongside a relatively positive equity backdrop, sees the USD broadly weaker with both the DXY and BBDXY indices down around 0.3%. Both the AUD ( +0.3% @0.7641) and NZD (+0.38% at 0.7052) have benefited from the USD weakness and now trade close to the top of their respective recent ranges. GBP has gained the least of the majors against the USD, up slightly to 1.3750. The Bank of England’s biggest inflation hawk Chief Economist Andy Haldane will step down from the MPC in June.

Yesterday the AUD showed little reaction to the very solid NAB survey March release. monthly business survey showed a broadly-based lift in business conditions to a record high in March, alongside record high forward orders. Strength in Australian business sentiment stands in contrast to the middling level of confidence for NZ businesses, but this seems to be well in the price for the cross, with the AUD/NZD a tad lower over the past 24 hours and now trading at 1.0840. 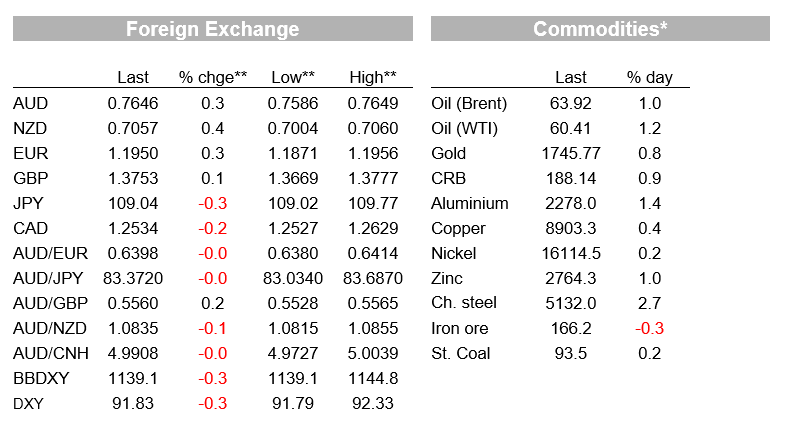 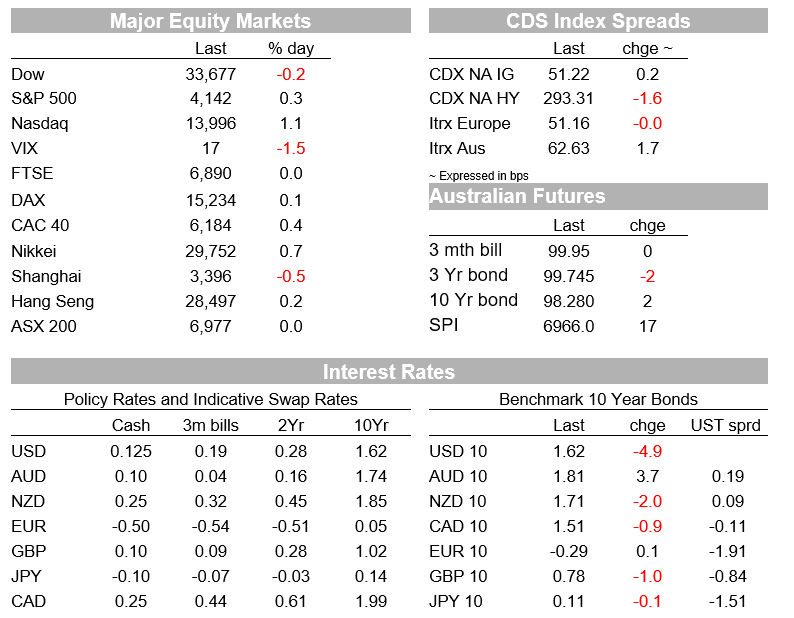