Oil has shot up in price, with equities rising too and there’s a bit more interest in government bonds.

Yesterday was manic in many markets, FX in particular, and the incoming economic data is now revealing the depths to which the global economy is in the early days of sinking. Depression like, but still with good reason to think it will be a relatively temporary affair. Overnight we’ve seen the German IFO business climate survey sink to its lowest level since mid-2009 – and the expectations reading fall very close to its immediate post-Lehman collapse record lows. US weekly jobless claims leapt to 281k from 220k the prior week. And the Philadelphia Fed’s Business outlook slumped to its lowest readings since 2011, the still early stages of the post-GFC economic recovery.

Following one of the most extraordinary days in FX markets yesterday that many of us can remember, my Bloomberg screen at 6:00 AEDT told me that AUD/USD was exactly unchanged from where it was at Wednesday’s New York close (-0.6% now).  The hi/lo range of 0.5510 to 0.5976 was enough for the RBA to deem it a disorderly market (Governor Lowe admitted that liquidity in the forex market was thin but quickly added “we haven’t judged conditions poor enough to intervene”). We read this as implicit endorsement of the depths to which the currency sank at its worse point yesterday. Indeed Lowe went out of his way to note that the “A$ has been a great shock absorber”. Let’s hope he’s not now looking aghast at the battler being at its o/n high point some 8.5% off its intra-day lows.

As for the sharp reversal in the AUD in late afternoon Sydney time yesterday (and extended offshore), one factor looks to be leveraged investors bailing out of their recently established short positions (one of my BNZ colleagues notes that o/n kiwi rates were trading as high as 26%, making it prohibitively expensive to stay in the trade). It’s also possible that some longer term market participants, whether Asset Managers or exporters, have looked at AUD/USD on a 0.55 handle and deemed the notion of lifting longer term hedges irresistible. Regards the earlier fall, there is little doubt that the need for Funds to buy USD to rebalance their existing hedges in light of the 30% fall in equity market so far this month, was a factor.

The RBA and RBNZ have, along with seven other central banks, succeeded in re-activating their USD swap lines with the Fed, which in the case of the RBNZ and RBA lapsed in 2010.  The RBNZ swap line will provide up to US$30bn worth of liquidity, and the RBA’s as much as $60bn. These moves should help impose limits on how far the USD can continue to rise.

Last night the Bank of England cut the Bank Rate to 0.1%, less than a week after having cut it by 50bps to 0.25% and has expanded its QE debt buying programme by £200bn to £645bn. This follows yesterday’s moves by the Fed (a new Money Market Mutual Fund liquidity facility, which should ensure these funds to ‘break the buck’ as occurred during the GFC) the ECB (an additional €750bn of QE bond buying to run through September and with a likely abandonment of strictures on how much of any individual country’s bonds it buys – read Greece and Italy) and the multiple RBA initiatives. These included cutting the Cash Rate to 0.25% and setting a 0.25% 3-year bond yield target, and other measures aimed at increasing lending to the corporate sector, SME’s in particular via 3-year cheap loans to banks. The AOFM will shortly augment this with a package to support non-banks, small lenders and the securitisation measures. We can also expect new fiscal tax and spending measures, likely to be announced over the weekend.

The speed and aggression with which monetary and fiscal authorities are now wheeling out measures to try and cushion the economic fallout from the still rapidly escalating global COVID-19 case-load and sewing the seeds for a hopefully rapid recovery down the track, has resonated somewhat in equity markets overnight. That said, gains in US indices are modest, just 0.5% for the S&P 500, 1.0% for the Dow and 2.3% for the NASDAQ. As for one of the latter’s FAANG starlets, Amazon has said that it is not accepting new orders at this time while it works to fulfil open orders and restock items following increased demand.

For all the volatility been seen across equities, bonds and foreign exchange, the oil market remains about the sharpest toy in the box. WTI crude is up a cool 25% overnight, albeit still in the mid-$20s (Brent +13.5% to $28.20). This has contributed something to the NOK, CAD and AUD being the best (or in case of AUD least worse) performing G10 currencies of the last 24 hours.  The USD’s status as the pre-eminent safe-haven asset during time of extreme market stress is reflected in the JPY being the weakest G10 currency, USD/JPY up a cool 2.2% to ¥110.50.

It’s a very light calendar of scheduled events today. Keep an eye out for the latest Loan Prime rate announcements from the PBoC at 12:30 AEDT. US Existing Home Sales is the only data release  offshore tonight, with a blank calendar both here and NZ. 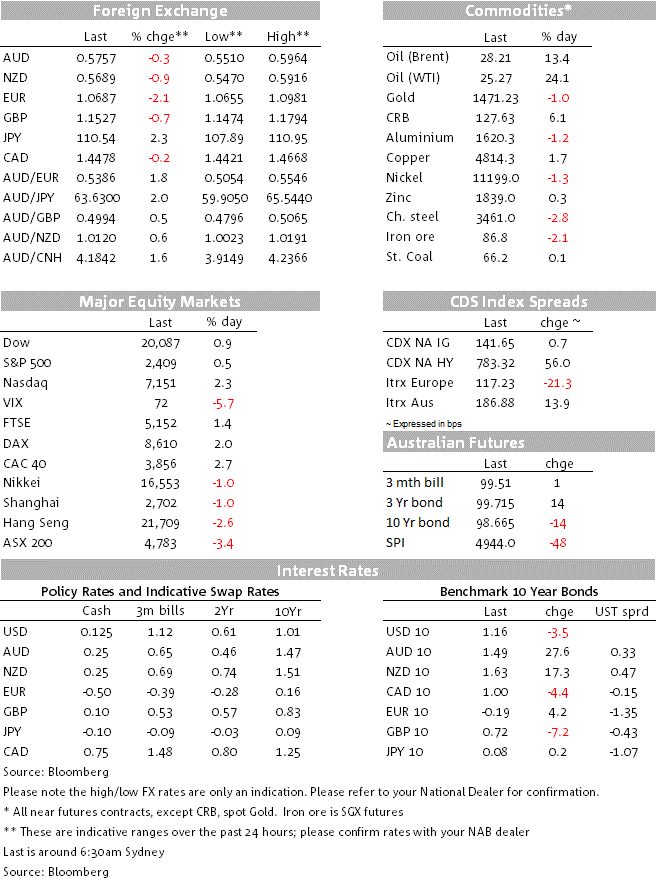