September was a challenging month for the AUD/USD. 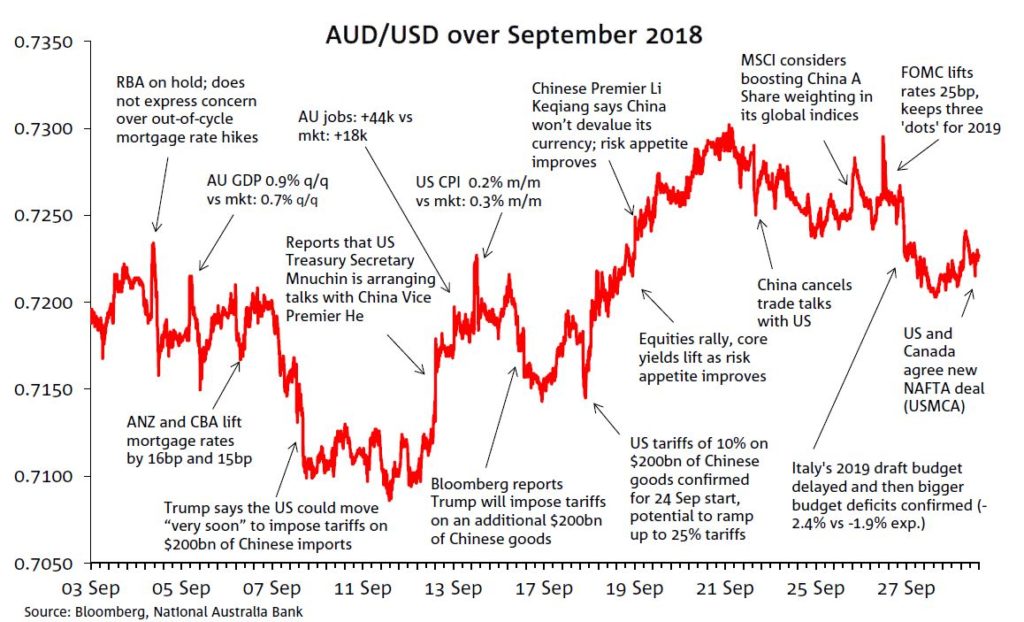 Heightened US-China trade tensions weighted on the pair early in the month driving the currency down to a low of 0.7085 on September 11th, a level not seen since mid-February 2016. However, in a classic “sell the rumour, buy the fact”, the announcement of a new round of US trade tariffs on Chinese imports with the threat of more to come was followed by an improvement in risk sentiment helping the AUD/USD reach a month to date high of 0.7302 on September 21st. Thereafter the cross was unable to make a sustained break above 73c, ending the month at 0.7227 with the downtrend established since reaching a high of 0.8136 late in January still unchallenged on monthly close basis.

Early in the month an RBA unconcerned over out-of-cycle mortgage rate hikes and a stronger-than-expected Q2 GDP print didn’t have lasting positive impressions on the AUD/USD. Instead US-led trade tensions were once again the bigger influence. The cross fell to 0.7102 on September 7th, as Trump suggested further US tariffs on an additional $200bn of Chinese imports were around the corner with tariffs on an additional $267bn of imports “ready to go”. The souring in sentiment saw Emerging Markets come under pressure and with that the AUD/USD down to a monthly low of 0.7085.

Eventually, US tariffs on a further $200bn of Chinese goods were announced on September 18th, but the fact these new tariffs were only 10% rather than 25% alongside reassuring comments from Chinese officials regarding their focus to stimulate their domestic economy with no intentions to seek a competitive devaluation of the yuan, boosted risk sentiment helping the AUD/USD briefly trade back above 73c.

Later in the month the Fed raised the Funds rate by 25bps to a range to 2-2.25%, as expected, and the removal of the word “accommodative” in the Statement was seen as a nod to the widely held view that the policy rate is getting pretty close to neutral. Although the Fed hiking decision was well priced, the AUD/USD still lost a bit of ground in the last few days of the month with the earlier improvement in risk dented by Italian budget concerns and the move higher in oil prices.

AUD/USD continues to trade near the lower edge of our short term fair value range (roughly +/- 3.5 cents) though has  never managed to break below the range and so signal a clear ‘buy’ signal. Higher oil prices, to which LNG prices are formulaically tied, have been the main supportive influence, adding about half a cent to fair value in September. Coal has also been supportive, due to a 10% rise in spot coking coal prices.  Aluminium was a negative influence though underperformed other base metals in September and as such was not representative of the broader base metals complex.

The lift in US front-end yields in September amid ongoing stability in AU-equivalent rates has pulled fair value down by almost a quarter of a cent, partly offset by a fall in the VIX, boosting the risk sentiment component of the model.