International trade proves to be a fickle beast

The world is vastly different to what is was a few years ago. But it isn’t all doom and gloom for Australia’s international trade prospects, says NAB group chief economist Alan Oster. 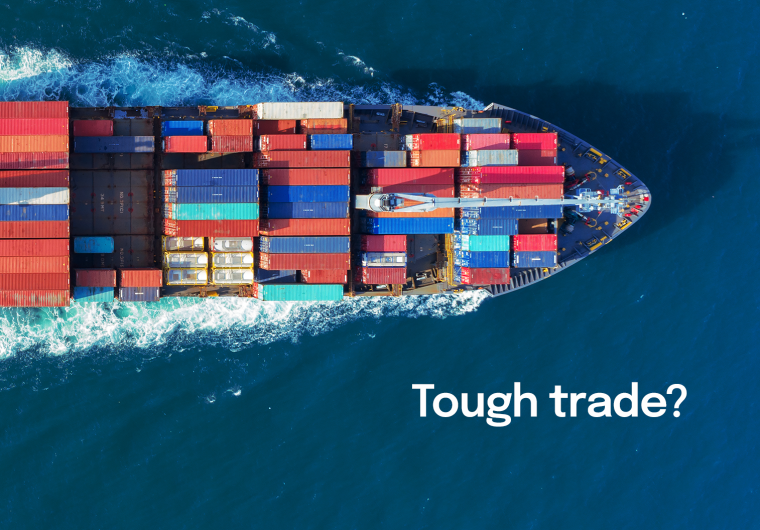 AUSTRALIA’S INTERNATIONAL trade prospects have been in the spotlight as economists weigh up the fiscal impact of ongoing lockdowns, global supply chain issues, shipping container shortages and now Russia’s war in Ukraine.

The combined impact has been extremely challenging. However, in some ways, Australia’s international trade results with China have improved in the last year or two, says NAB group chief economist Alan Oster.

He’s responsible for NAB’s global economic and financial forecasts, making him very much in demand as the bank assesses the risks and opportunities that lie ahead.

“AUSTRALIA MIGHT BE SELLING LESS VOLUME, BUT THE PRICES WHEN TRADING WITH CHINA AND OTHER COUNTRIES ARE VERY HIGH, SO WE’RE ACTUALLY GETTING A LOT MORE MONEY FROM THE LIKES OF CHINA.” says Oster.

However, the pandemic has highlighted our nation’s over-reliance on international trade with China, prompting many to hunt for better trade prospects closer to home. “Moving forward, I believe there will be an increasing push to diversify our reliance on other countries, which has been a brutal lesson for all of us post-Covid,” he says.

Europe’s over-reliance on Russia as a trading partner could lead to a lot of market disruption at the end of this year, when a ban on Russian oil imports comes into effect. “There are indications that this could lead to a recession in the United Kingdom, which will of course have ramifications for Australia,” says Oster.

Regardless, it’s fair to say that wealthy investors have been rattled by market turbulence, but are starting to diversify into new asset classes such as gold, according to Oster.

While he believes that business investment will be steady, consumers across the board will be spending less and putting that discretionary spend into paying off higher mortgage prices, he says.

“While the second half of 2022 will be quite weak, we believe that the nation will avoid a recession,” says Oster.

Higher commodity prices, particularly coal and gas, are making their mark in Australia, and this will only worsen in the coming year or two. Be prepared for even higher costs, he warns.

Commodity prices will be greatly affected by Russia’s response to Europe’s looming ban on Russian oil imports. Russia might react by withholding all oil and gas exports, says Oster. Whatever transpires will have a huge impact on the Australian economy and hip pockets across the country.

Meanwhile, the US central bank is talking about aggressive cash rate rises, which, combined with higher commodity prices, could stymie economic growth. This is likely to produce a hard landing for the US in mid-2023, he says. Coupled with higher domestic interest rates, this would weaken the Australian outlook in 2023.

Here in Australia, sectors already struggling include construction, which is battling with small margins, input costs going up and fixed-price contracts causing grief for some builders, making it increasingly difficult to make money in construction. Mining, wholesale and manufacturing sectors are enjoying solid growth, while hospitality has been strong. “But there’s a limit to how much you can expect retail to carry the economy going forward,” he warns.

Those invested in real estate in the CBD will continue to feel economic pain for a while, given the continued lost trade as consumers favour life in the suburbs, impacting CBD retail trade.

“We need more students for inner-city apartments and more people coming into the city to stimulate the CBD.”

Moving forward, the new government would be wise to focus on fiscal repair and bolstering flagging productivity levels amid stagnant wage growth, says Oster. “We’ve got to improve our productivity performance as a nation. In the past, Australia’s labour productivity levels have been high, but we’re now sitting at 1% growth, which is below the average of the OECD rate over the past 10 years, and below our longer-run performance.”

The information contained in this article is gathered from multiple sources believed to be reliable as of the end of May 2022 and is intended to be of a general nature only. It has been prepared without taking into account any person’s objectives, financial situation or needs. Before acting on this information, National Australia Bank Limited ABN 12 004 044 937 AFSL and Australian Credit Licence 230686 (NAB) recommends that you consider whether it is appropriate for your circumstances. NAB recommends that you seek independent legal, financial and taxation advice before acting on any information in this document.

Drawing upon the full range of expertise available across the entire NAB Group including JBWere and nabtrade. Private View provides insights to help high net worth individuals and their families bring their financial vision to life.

Australia’s wealthiest families are favouring a new approach to philanthropy — one that requires deep, strategic thinking — to create much-needed change and leave a lasting legacy.

The RBA gets serious

Putting Wealth To Work For Generations

In challenging market conditions Australians are choosing to use buyers agents more than ever before, we’ll take a deep dive to find out more.