The world’s best: Eight of the most incredible ski resorts on the planet

From the best powder to the brightest bling to the unlikeliest location, we count down eight ski resorts around the globe that are nothing short of exquisite. 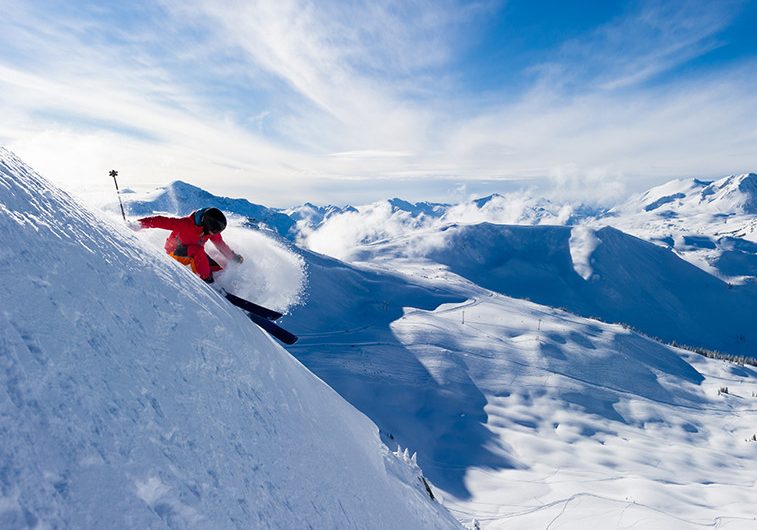 Exclusive? Absolutely. Heated pavements? Naturally. Michelin-starred restaurants? Seven. Comprising four interconnected villages and covering five altitudes, the French Alps’ Courchevel ski resort is sited within the world’s largest ski area and has long been a royalty and celebrity hotspot. Still one of the world’s most exclusive ski resorts, it features fairy-tale architecture and some incredibly tough black runs as well as – yes – more Michelin-starred restaurants than any other ski resort in the world. For celebrity spotting and oligarch hobnobbing, caviar and excess, head straight to Courchevel 1850, the highest village and home of Les Suites De La Potinière, last year named the world’s most expensive ski hotel.

When to go: December to April
More: www.courchevel.com

For the steepest powder skiing in the world

Get your frontier gear on and hop into that helicopter, because not far from the base of one of the world’s only sea-level ski resorts lie the planet’s steepest slopes, covered in deep, deep powder. Famed for its heli-skiing and average annual snowfalls of more than 16.5 metres, Alyeska Resort boasts Alaska’s largest ski area. Described by one reviewer as “about as far from Aspen as you can get, physically and figuratively”, this is skiing at its wildest. At the end of your day on the slopes you’ll be staying in the only hotel in town (Hotel Alyeska), drinking the only local beer (Alaskan Amber) and loving that you’re at one of the world’s most remote ski spots – and just a stone’s throw from bears, whales, and icebergs.

When to go: February to April
More: www.alyeskaresort.com

For being the unlikeliest location

A ski resort in Africa. Really? The landlocked kingdom of Lesotho, surrounded on all sides by South Africa, is the only country in the world entirely above 1000 metres. With much of the nation’s mountainous highlands accessible only by foot, horseback or light aircraft, it is here that you’ll find Lesotho’s only ski resort: Afriski Mountain Resort. It’s not the biggest ski field in the world, and it doesn’t claim to be the best, but it is surely one of the most unexpectedly located. You’ll dine in Africa’s highest restaurant, ski down slopes overlooking the wilds of southern Africa, then come home and ask everyone to guess which country you just went skiing in.

When to go: June to August
More: www.afriski.net

For being the king of bling

Known for being awash with European royalty, private jets, fast cars and decidedly non-faux furs, the resort town of St Moritz would have to take the crown as the world’s blingiest skiing destination. It’s been called everything from the world’s most famous winter holiday destination to the most luxurious ski resort on earth, and in 1986 the town became the first geographical location in the world to be trademarked. Its reputation for extreme privilege and luxe aside, St Moritz’s appeal includes exceptional skiing, a picturesque lakeside setting and an annual average of 300 days of sunshine – as well as being the home of White Turf, an exclusive annual international horse-racing event held on a frozen lake.

When to go: December to March
More: www.stmoritz.ch/en

For being powder heaven

Officially Japan’s number-one ski resort and generally acknowledged as Asia’s best, Niseko United’s annual snowfall is among the highest in the world at more than 14.5 metres. But it’s not just the quantity of snow that makes this spot a standout – it’s the quality. Variously described as “Japan’s mythical powder paradise” and “the stuff of legend”, Niseko’s snow is acclaimed as some of the lightest and driest in the world. As one New Zealander told the Financial Times, “You don’t go for the European suntan and lunches on the balcony. You go for powder heaven.”

When to go: December to March
More: www.skijapan.com/resorts/niseko

It’s got celebrities. It’s got luxury. It’s got a hotel (The Little Nell) with a 20,000-bottle wine cellar. But the legendary Aspen Snowmass resort complex has also got a fascinating history. During the late 1800s, Aspen was a thriving silver-mining town with a population of 12,000, its own banks and even an opera house. By the 1930s, however, with silver mining long in decline, less than 1000 residents – and a whole lot of snow – remained. When a couple of businesspeople decided in the mid-1940s to redevelop the town as a ski resort with a focus on culture and the arts, its reinvention began. By 1960, the year Hunter S Thompson blew into town, Aspen was ready for its next incarnation as a hot destination for artists, hippies and partiers, followed in the 1980s by celebrities, jetsetters and billionaires. Aspen is about skiing, yes; but it’s also just about Aspen.

When to go: December to February
More: www.aspensnowmass.com

For the adventure of a lifetime

Imagine being the first person to ski a slope. Not just that day, not just that season, but ever. That’s the promise of an emerging group of tour operators offering small, exclusive skiing tours to the wilds of Antarctica. While there’s not a ski resort in sight, this unique destination earns a special place on our list for its sheer remoteness and breathtaking beauty. The largely yacht-based adventures last around a month, and come neither cheap nor with comfortable ski lifts or plush chalets. What they do come packed aplenty with is the opportunity to explore by kayak, hike with penguins and seals and ski the wildest, most untouched, most pristine slopes on the planet.

When to go: When the tours go
More: Search online for operators

Is it because there’s not one but two mountains? Is it because there’s everything from high glamour to down-to-earth Canadian charm? Is it the incredible bowl skiing often described as the world’s best? Or is it the world’s longest unsupported lift span that’s also the highest of its kind? Partly. But mostly it’s because the big-mountain paradise known as the Whistler Blackcomb ski resort has hands down some of the most epic skiing – heli-skiing and bowl skiing included – the planet has ever seen.

When to go: December to March
More: www.whistlerblackcomb.com

2022 Federal Budget: What it means for Private Wealth

This was a Federal Budget designed to respond to a changing world and a forthcoming election.