Markets Today: Is it ‘Mission Accomplished’ for the Fed?

Words from the Fed have had little impact on the markets, across all sectors, except oil and gold, which rose on the news that not much has changed.

As expected the Fed left the Funds rate unchanged and the key take away is that in spite of the recent inflation uplift the Fed is happy to stay the course and doesn’t yet see the need to accelerate the pace of rate hikes. Ahead of the Fed market moves were relatively subdued, initial reaction to the decision and Statement saw the USD and UST yields gap lower, but these moves quickly reversed. The USD has ended marginally stronger across the board, the UST yield curve has steepened  and after trading in and out of positive territory, US equities have closed marginally lower.

The post-meeting statement revealed a Fed more confident that inflation will recover, evident by the removal of the line that the Committee is ‘monitoring inflation developments closely’. This observation was added when inflation was edging away from target and now that inflation is close to target, the FOMC noted that on a 12-month basis inflation is expected to run near the Committee’s “symmetric” 2 percent objective over the medium term. As for the labour market, the Fed retained the same language noting that is has continued to strengthen and in terms of the economy, the Fed dropped the line that the economic outlook has strengthened in recent months (since it hasn’t ) noting that economic activity remained at its ‘moderate rate’.

The immediate reaction to the Statement saw the USD drop about 0.5% along with a decline in UST yields, however these moves quickly reversed into the close, leaving the USD marginally stronger across the board. Meanwhile, the UTS curve has ended marginally steeper with the 2y note 1bps lower at 2.49% while the 10y rate is at about half a bps higher at 2.966%.

So the Fed has done little to change the factors that are currently supporting the USD. The Fed remains on course to at least deliver two more rate hikes this year (a June hike is almost fully priced and another one also essentially fully priced for December) with the risk of adding one more if there is evidence of more inflationary pressures. Meanwhile other major central banks have curled under their duvets awaiting a rebound in activity data following a soft start to 2018. On this latter point we note that Europe’s Q1 GDP reading, released overnight ease as expected (more below). So along with relatively better domestic data releases, the US also continues to find support from relatively higher US yields and a likely reversal of extreme speculative positioning. Thus, near term, the USD path of least resistance continues to be up rather down.

Looking at other currencies in more detail, the AUD has won the least ugly contest relative to other G10 currencies and it has managed to remain unchanged while others have continued to succumb to the stronger USD environment. That said, the AUD currently trading at 0.7493, still looks vulnerable to the down side and we wouldn’t be surprise to see the aussie eventually trade with a 73 handle near term. Similarly, NZD now trades just under the 70c mark with key support coming in around the 0.685/0.69 mark.

The Euro has been one of the biggest losers overnight and now trades at 1.195, essentially back to levels last seen at the start of 2018. EU data was not helpful overnight, the EU grew at 0.4% in Q1, down from 0.7% in Q4-17. The softness partly reflects the bad weather and an underlying slowdown from the rapid pace of growth seen last year. Meanwhile, back in the US and ahead of Friday’s payrolls report,  the ADP employment report showed another month of strong private employment confirming that the US labour market remains strong.

GBP has seen come under a little bit of pressure in the past few hours amid reports that  PM May does not have cabinet support for her “customs partnership”  plans with the EU. Bloomberg reports that ministers are said to have split 6-5 against her proposal, opening the door for more political uncertainty. GBP now trades at 1.357, 8 figures below the mid April peak and a level not seen since  mid-January.

In other news and ahead of the US-China trade talks, Chinese officials have said that China won’t succumb to “threats” from the US, noting that China won’t accept any U.S. preconditions for negotiations such as abandoning its long-term advanced manufacturing ambitions or narrowing the trade gap by $100 billion, said the official, who asked not to be named, citing protocol. Yesterday, US Trade Representative Robert Lighthizer said that The US and China could “spend the next year developing how we deal with each other over a period of time,”. So the main conclusion hear is that, more rhetoric is likely and  we shouldn’t expect any outcomes any time soon. 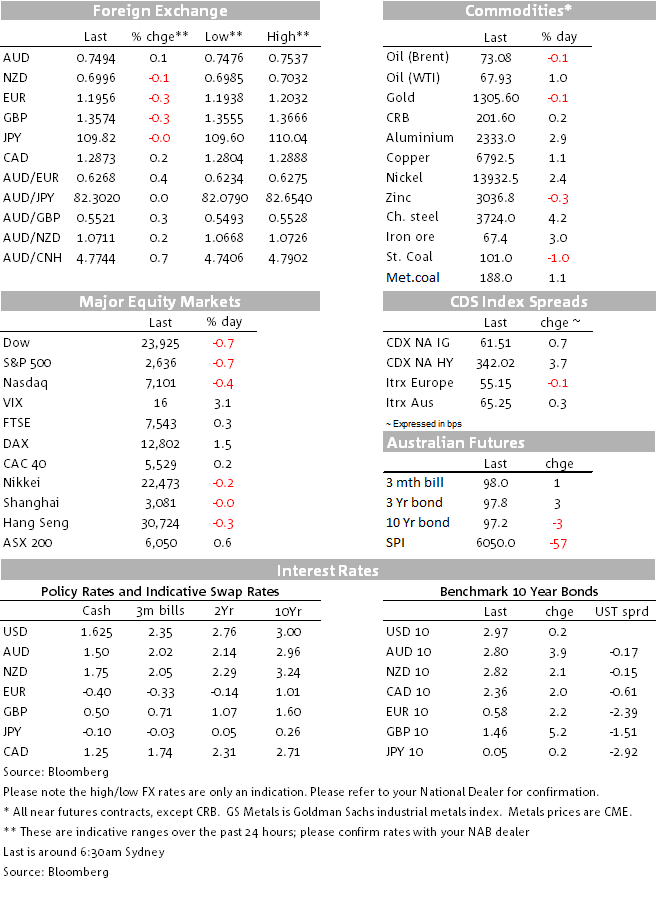