Investing in collectibles: do passions and profits mix?

A vintage sports car, a pink diamond necklace, a precious work of art – they may be more fun than a share portfolio but do they make sense as investments? We examine the world of high-value collectibles – the good news and the cautionary tales. 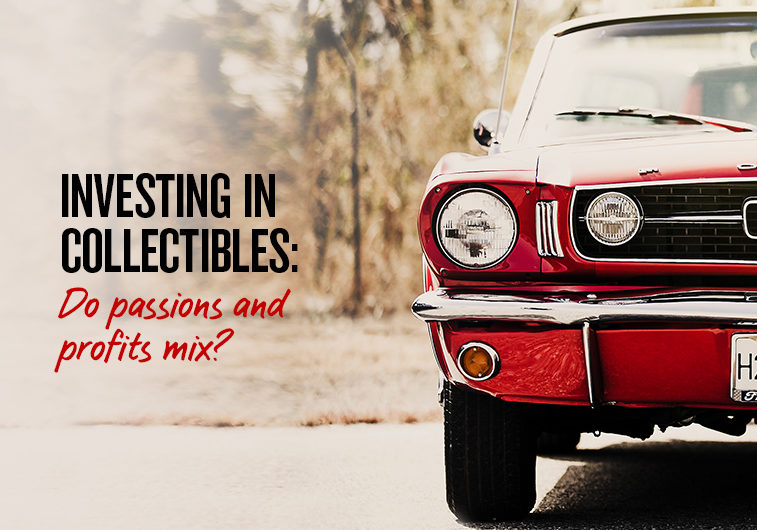 In 1908, a 12-year-old boy bought a green stone for 25 cents at a pawn shop. Two days later he sold the stone – actually a two-carat emerald – for US$800 (and years later became world-famous jeweller Harry Winston, also known as the King of Diamonds).

In 1969, a Ferrari 250 GTO changed hands for just US$2,500, the lowest known cash transaction ever for what is now known as the world’s most coveted collectible car. Last year, the same model sold for a reported US$70 million.

Here in Australia, too, investments in paintings by leading local artists including Brett Whiteley and Jeffrey Smart have been exceeding stock market returns.

Results like these fuel interest in collectibles or ‘passion investments’ – the chance to turn an interest into a profitable venture. At its best, it’s a win-win situation – you have the pleasure of driving the car (or wearing the diamonds or admiring the painting) as your investment rises in value. As with any investment, however, there’s no guarantee of success.

Let’s consider some things before diving in.

Sometimes, an asset loses its value because interest wanes. For example, in January 2015 the original acetate pressed from Elvis’s first recording became the most expensive record ever sold, exchanging hands at US$300,000.

Later that same year, another one-off acetate was expected to fetch £12,000 (around US$18,500) but achieved only £6,500 (around US$10,000). For collectors, it was seen as a turning point in the value of the King’s memorabilia, reflecting that, as our memory fades of celebrities, so too can the value of their collectibles.

Another potential problem is authenticity. In a 2014 television interview, a well-known (and very wealthy) American businessman described himself as a ‘sucker’ for having spent millions of dollars on fake vintage wines.

Meanwhile, as Doug Woodham points out in his book Art Collecting Today, where money goes, scoundrels follow – and the history of collecting is littered with tales of smart collectors being duped. Woodham cites the story of a former chairman of Sotheby’s who spent US$8.3 million on a Mark Rothko painting from a highly-respected dealer only to later discover it was a fake.

Even when no fraud is intended, authenticating a work of art is far from straightforward. One of the most notable examples is the painting Old Man in an Armchair, purchased in 1957 as a Rembrandt by London’s National Gallery. A few years later, its attribution was downgraded to ‘a follower of Rembrandt’ and it was included in the 2010 Fakes and Mistakes exhibition. Then, in 2014, the head of the Rembrandt Research Committee, Ernst Van der Wetering, thought the picture might be a Rembrandt after all. The National Gallery now describes it as ‘probably by Rembrandt‘ – and the fact that one of the world’s leading art institutions is still hedging its bets might sound warning bells for any potential investor.

There’s less ambivalence with an investment like gem stones. An expert can quickly spot a fake pink diamond, for example, and, unlike assets such as antique manuscripts and wine, gemstones don’t need to be kept in a controlled environment, which can generate a high and ongoing cost for owners of fine art, manuscripts and other fragile collectibles. Pink diamonds are also extremely rare, so their value is very unlikely to fall.

However, in an interview for Sky News, Garry Holloway of Melbourne’s Holloway Diamonds pointed out that diamonds have fundamental problems for private investors in that the industry is opaque, with high margin and slow stock turns and poor avenues for reselling. He adds that, as a broker, “I make no predictions or guarantee that past substantial rises in diamond prices, especially fancy coloured and pink diamonds, will continue, or that they are easy to liquidate”.

Lack of liquidity can be a big problem for all collectibles. The only way to make a profit is by finding someone willing to pay more for your purchase than you did and that could take time or, worst case scenario, never happen at all. If you need a quick sale for any reason, you might wear a significant loss.

Assets such as wine, fine art and ceramics are also very fragile and even a small amount of damage can decimate their value. There are also psychological and emotional components to passion investing that could make it hard to part with, say, a cherished work of art.

This is why some experts regard collectibles as more of a hobby than a true investment. As Charles Rotblut, a vice president with the American Association of Individual Investors, recently told the Wall Street Journal: “Just buy them because you like them, not because you hope to profit.”

Investing in collectibles can be profitable but it’s also a passion game. Three things to consider before going ahead:

Drawing upon the full range of expertise available across the entire NAB Group including JBWere, JANA, MLC and National Australia Trustees, as well as from select external partners, Private View provides insights to help high net worth individuals and their families bring their financial vision to life.

Family governance isn’t about deeds and charters so much as good communication, a shared vision and clear decision-making. It takes practice.

Positive returns: how everyone wins from impact investing

Inspired to make a difference in these tough times? Impact investing may be the perfect vehicle.

The NAB Commercial Property Index increased 5 points to an above average +8 in Q4.

Investors position for the megatrends of the future

NAB’s Fixed Income Beyond the Institutional Sector Summit looked at the trends that are likely to shape the way we live, work and interact for years to come.