Markets Today: And back to recession fears

A wild night for risk assets with recession risks rising.

Overview The Honeymoon Is Over

A wild night for risk assets with recession risks rising. In the US the Atalanta Fed’s GDP Now estimate for Q2 is at -1.0% annualised, following -1.6% in Q1. Weak PCE figures were partly responsible with personal consumption coming below expectations at 0.2% m/m (vs. 0.4% expected) and is the slowest monthly pace of growth in 2022. Equities fell with the S&P500 -0.9% in a volatile night with equities earlier in the session as low as -2.1%. The S&P500 has had its worst half year since the 1970s Bonds rallied hard led by Europe with German 2yr yields -18.7bps to 0.64% and 10yr -18.6bps to 1.34%. A combination of factors drove including no upside surprise to French inflation, month-end buying and safe-have flows.

US yields also fell sharply led by the belly of the curve , with the 5yr -10bps to 3.04%, 2yr -8.5bps to 2.95% and 10yr -7.2bps to 3.01%. Moves in nominals outpaced real yields with the 10yr TIP yield -3.0bps to 0.66% meaning the implied inflation breakeven was -4.2bps to 2.35% and is now bang in line with what many consider to be at target inflation (CPI less 30bps to match PCE). Market confidence in the Fed in getting inflation back to target clearly evident and having built after hawkish rhetoric over the past couple of months. Fed Funds pricing has reduced with a terminal rate of 3.48% in March 2023, down from 3.59% yesterday. There is also now 54bps worth of cuts priced thereafter in 2023, up from 50bps of cuts yesterday.

Recession risk is very real. The Atlanta Fed’s GDP Now estimate for Q2 was revised to -1.0% annualised overnight, after having been hovering around zero for the past couple of weeks (see Atlanta Fed GDP Now for details). Importantly this follows a -1.6% annualised print for Q1, meaning if a negative Q2 is realised, there would be two consecutive quarters of negative growth. We can quibble about what constitutes a recession, but it would suggest a significant turning point for the US economy, with that turning point occurring much earlier than most people had thought. A recent Deutsche Bank survey found 90% of people were expecting a US recession by the end of 2023 (up from 78% previously), but only 20% had forecast a recession to occur in 2022. Morgan Stanley also revised their Q2 forecast after the numbers to 0.3% from 2%.

The US PCE figures were mixed and what grabbed the markets attention was the weakness in personal spending which was 0.2% m/m against 0.4% expected. Not official data but supportive of some notion of slowing, restaurant analytics firm Black Box Intelligence reported the number of diners at casual-dining restaurants fell around 3% in the 3m to June 12 on a y/y basis. The PCE deflators were also out and were slightly les than expected with the core at 0.3% m/m against the 0.4% consensus. Much of that beat had to do with rounding and unrounded it was actually 0.348%. An alternative core measure by the Dallas Fed called the Trimmed Mean PCE had core at 0.4% m/m and signalling little change in the core inflationary pulse. In annual terms headline was 6.5% y/y and core at 4.7% y/y, but still too high for the Fed and unlikely to sway them from their current path.

Other US data was at consensus or a touch softer. Jobless Claims were 231k vs. 230k expected, while the Chicago PMI was 56.0 vs. 58.0. Other regional manufacturing surveys have been much weaker with the street likely looking for downside risks to tonight’s more important ISM Manufacturing. Across the pond data was generally weaker. German labour market surprised sharply with the unemployment claims rate rising three tenths to 5.3% from 5.0%. At face value that was alarming, but the sharp rise was explained by refugees from the war in Ukraine adding to jobless claims. Traders continue to pare back how much tightening the ECB will do, with “only” 140bps of hikes priced for the four meetings left this year compared to 180bps priced two weeks ago.

Another area of the world where recession risk is high is in NZ where another very weak ANZ Business Survey saw the own-activity outlook slumping to -9.1 from -4.7, its worst since the GFC excluding the pandemic lockdown in 2022. Our BNZ colleagues note “when viewed alongside a record low level of consumer confidence, was either consistent with the NZ economy being in recession, close to it, or heading that way. Bucking the trend of weak data in Asia were the Chinese PMIs with strength seen in non-manufacturing with the index lifting to 54.7 from 47.8 and against 50.5 expected. Manufacturing in contrast was just in positive territory at 50.2 against 50.5 expected. The data though were overall positive enough to boost the AUD.

Finally, Australian job vacancy data yesterday was extremely strong with there being just 1.1 unemployed person per job vacancy, well down from 3.1 just prior to the pandemic. This suggests the unemployment rate will continue to decline and that the labour market is very tight and argues to the need for the RBA to act aggressively. NAB sees the RBA lifting by 50bps in both July and August. Were the labour market to tighten further as job vacancies hint, and wage rises accelerate more sharply, the risk is the RBA will feel compelled to continue to hike rates relatively aggressively after August when confronted with a high and broad CPI print. 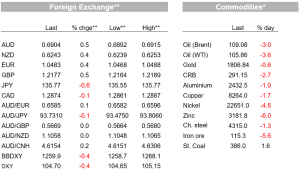 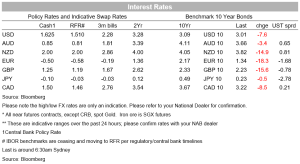