Reimagining our future through the Bard

The arts may not be as obviously critical as a hospital or a school. But they can provide new ideas to shape our world. 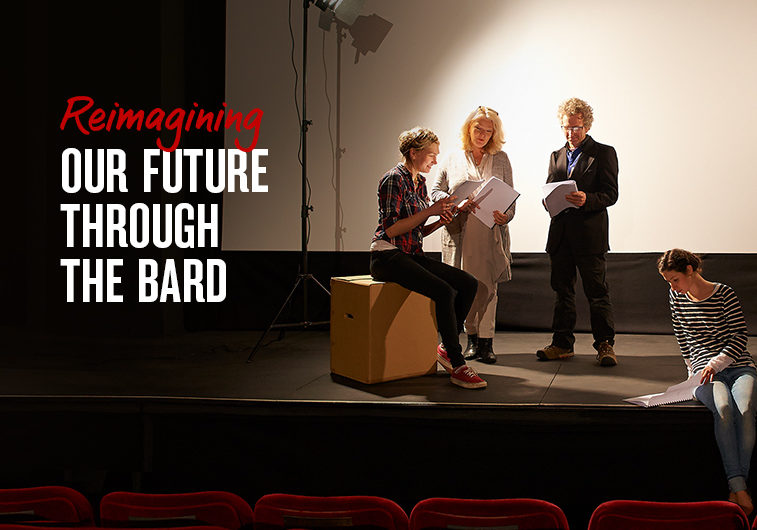 Thanks to the Bell Shakespeare theatre company, William Shakespeare’s comedy Much Ado About Nothing is about to perform at 27 venues around Australia – some four centuries after its debut in England.

Impressive, right? But one can’t help but wonder about the continued relevance of its material. True, it makes for an enjoyable night of theatre, but in the grand scheme of things, does it offer substantive value in modern Australia?

Bell Shakespeare Associate Director James Evans responds with a categorical yes. Indeed, he argues that this particular play is more relevant now than it was even 20 years ago.

That’s because, as Evans puts it, the play highlights the power and influence of the “wing-man, bro culture” – a toxic culture that lets men talk about women as if they are objects and leads young men like Much Ado About Nothing’s Claudio to behave appallingly towards his partner, Hero, shaming her in front of the crowd at what is meant to be their wedding.

“It’s really interesting that [this toxic male culture] exists in the play,” Evans says. “It’s like the guy was writing yesterday.”

Evans sees Shakespeare as putting these insights or truths into his writing for us to unearth when we’re ready. “Eventually we catch up to what he was thinking and figure out what he was talking about. It’s incredible.”

What value the arts?

Despite its continued significance, putting a value on Shakespeare – and the arts more generally – is difficult. How can we pour money into the likes of Shakespeare (and Mozart and Monet) when many Australians are without adequate housing?

While we undoubtedly need money for housing, hospitals and schools, it is also the case that we need money to help us form new ideas – to better understand and shape our society. This is well understood by the corporate sponsors of Bell Shakespeare. As it is by the many high net worth Australians who contribute to the company and the wider arts community.

At a time when public funding for Bell Shakespeare – and the arts in general – is continuing to shrink, NAB Private Customer Executive Jason Murray views philanthropy as critical. “Quite simply, if high net worth individuals didn’t provide philanthropic funds to Bell Shakespeare, they wouldn’t be able to survive and put on the programs that they do, whether enriching society at the Opera House, or literally changing lives in juvenile justice centres and schools around the country.” In fact, there are signs that philanthropic support is beginning to build in Australia, if not to the dizzying levels of the United States. In any case, Evans remains optimistic about the future of the arts. “Perhaps there are moments in our history when we turn away from the arts, but we always come back. Because we need to hear our stories… and to refresh ourselves and to understand who we want to be. People will always value the arts.”

The company strongly believes in its own worth – in the legacy of Shakespeare’s work and what it offers future generations.

As Evans notes, there’s a great quote from Shakespeare’s Hamlet where Ophelia says, “We know what we are but know not what we may be”. “We use that quote a lot because it’s all about dreaming and imagination and I think that’s what Shakespeare gives us. He gives us a portal into an imaginary world where we can dream about who we could be, what our society could be.”

Educating Australia and beyond

It’s this attitude that drives the company’s community programs. Thanks to the vision of Bell Shakespeare’s founder, John Bell, the company has ensured that the Bard’s messages aren’t confined to privileged inner city audiences.

The same year Bell Shakespeare was established, it launched its schools program, which now sees Shakespeare reach 80,000 children a year. Their performance troupe, The Players, travels all over Australia to rural and remote regions. “For some schools it’s the big event of the year,” Evans says. “For kids it’s a glimpse of something outside their world and of other possibilities.” He notes how satisfying it is for the company when yet another person tells them how inspired they were to have seen one of Shakespeare’s plays at their school 20 years ago.

In addition to performing in front of high school and primary students, the company runs many teacher training and professional development courses.

For the past decade, the company has also run a juvenile justice program that brings Shakespeare to prison inmates in NSW and now in Victoria.

They often focus on Macbeth – not the whole play, but various scenes as they introduce some of its language, concepts and characters, and what actions and consequences mean in our world. Evans has found the program incredibly satisfying. “What it does for the participants is allow them to examine themselves through the lens of Shakespeare rather than having the focus put on their own foibles or failings.

Of course, as with Bell Shakespeare, these programs require funding to continue. And that returns to the appreciation of the role that the arts can play in our society.

NAB Private, as a sponsor of Bell Shakespeare, recognises the important part it plays “beyond just putting on shows at the Opera House or the Arts Centre in Melbourne”, says Murray. He points to the fact that Bell Shakespeare is the only national touring theatre in Australia, reaching out beyond the capital cities to the likes of Bunbury, Dubbo and Rockhampton. “Why? It’s about community,” he says. “It’s also about seriously good theatre – theatre that’s incredibly accessible – if you haven’t seen a Bell production, I strongly recommend it! And if you like what you see you can always become a donor, no matter how small.”

2022 Federal Budget: What it means for Private Wealth

This was a Federal Budget designed to respond to a changing world and a forthcoming election.