The AUD/USD rose during October on the back of improved global risk sentiment, courtesy of progress on US-China trade talks and Brexit developments. 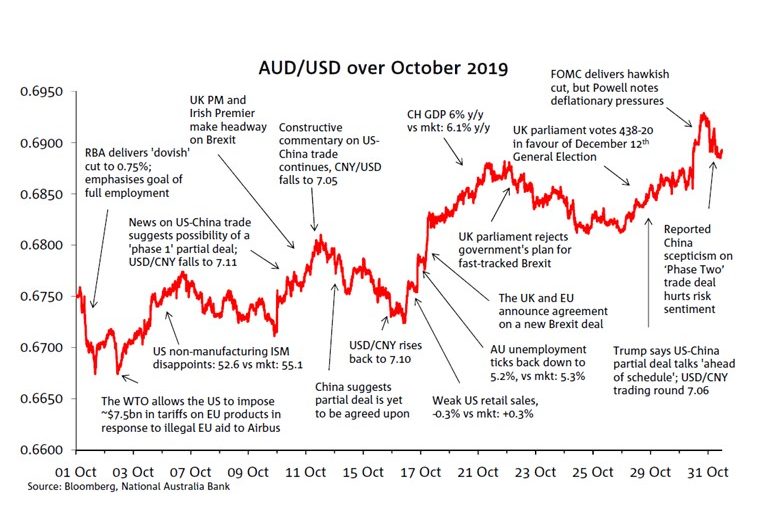 The AUD/USD rose during October on the back of improved global risk sentiment, courtesy of progress on US-China trade talks and Brexit developments. The currency was further supported by USD weakness, USD not helped by soft US data releases. The combination of these factors saw the currency reach a high of 0.6930 on October 31st, well above the monthly low of 0.6674 it had touched early in the month. After trading in a range of 2.59 cents, the AUD/USD ended the month at 0.6894, 1.44 cents higher than where it had begun.

The AUD/USD started the month at 0.6750, but soon came under pressure as the RBA delivered a ‘dovish’ rate cut on October 1st – surprising the market by emphasising the goals of full employment and the inflation target (rather than just ‘progress towards’.  That saw the AUD/USD touch 0.6672 on October 1st, just off the monthly low of 0.6671, reached a day later, on news the WTO had authorised the US to impose tariffs on the EU in response to illegal EU aid to Airbus.

Despite a risk-off start to the month, improvement on key sources of geopolitical risk – US-China trade and Brexit supported the currency. Talks between the US and China restarted on October 10th, where reports quickly emerged of a possible partial deal. The AUD/USD fluctuated over the next few days alongside prospects of a partial deal – rising to 0.6810 on October 12th amid signs from the US that a deal was all but confirmed, before falling to 0.6727 on October 16th when Chinese reports signalled further discussions were needed. Over the rest of the month, apparent progress towards a partial US-China trade deal alongside a steady USD/CNY decline below to 7.05 boosted the AUD/USD while positive Brexit news was an additional positive factor.

The AUD/USD was further supported by “in-house” USD weakness. Disappointing ISMs and retail sales, raised concerns that weakness in the manufacturing sector could be spilling over to the rest of the US economy. Later in the month, the FOMC decision to lower the Fed Funds rate target by 25bps and signal no more for now, was as expected, but the USD came under renewed pressure following dovish comments from Fed Chair Powell highlighting the very high bar to any resumption of rate hikes.  These factors, alongside further improvement in risk sentiment saw the AUD/USD reach its monthly high, before easing in the last trading hours of the month amid renewed US-China trade agreement doubts.