Markets Today: Every Day is a Winding Road

US shares back up as trade war fears ease again, even though China threatens currency devaluation as a tool against tariffs. @NAB’s Tapas Strickland joins Phil Dobbie on today’s Morning Call podcast.

Having seen Sheryl Crow at Bluesfest over Easter and again in Sydney on Saturday, on the latter occasion supporting (supporting?) Melissa Etheridge, equity market volatility provides the excuse to make use of one her hits. Pharrell Williams has run her a close second after ECB President Mario Draghi and other ECB Governing Council members have been out en masse imploring investors to not worry and be happy about the Eurozone economic outlook, while repeating the “patient, persistent, prudent” mantra with respect to monetary policy.

ECB Chief Economist Peter Praet nevertheless cautioned that there is considerable uncertainty regarding the degree of slack in the Eurozone economy (something he’d already mentioned before Easter) and noting that inflation continued to be “lacklustre”. Draghi’s confidence was nevertheless enough to see EUR/USD put on half a cent, from around 1.2275 to near 1.2325.

AUD is 0.2% up on where it started the week at 0.7700 as we write but has underperformed all other G10 currencies against the USD.  AUD took a hit late in our day yesterday on news reports that China is evaluating the potential impact of gradual yuan depreciation as part of combating proposed tariffs. The report noted a Chinese government study that looked at using the currency as a tool in trade negotiations with the US, and also what would happen if China depreciated the yuan to offset the impact of any trade deal that curbs exports. The report also resonated in Europe which took AUD/USD down to a low of 0.7652, the bottom of the effective 0.765-0.78 range that has contained the pair since mid-March.

It’s worth repeating that chances of a Chinese currency devaluation, along the lines of August 2015 or otherwise, are minimal.  Regardless of whether the US and China do manage to iron out their differences on trade in coming months (most likely they will) a CNY devaluation or encouragement of a renewed depreciation trend will set back efforts to liberalise the capital account and encourage greatly increased foreign investor participation in China’s bond market, by years. Incidentally, President Trump has been out overnight saying his administration will “probably” come to an agreement with China on trade.

Emerging Markets have witnessed new record lows for the Turkish Lire overnight, not on Syria but continued currency mismanagement where the government seems intent on adding stimulus (fiscal and/or monetary) to an already overheating economy. The Russian Rouble meanwhile has lost more than 4% on new sanctions imposed on Russian oligarchs – including metals tycoon Oleg Deripaska. This looks to be the reason for yesterday’s near-5% surge on aluminium prices on fears of reduced Russian shipments.

Finally, the bipartisan US Office of Management and Budget (OMB) last night published its latest US budget deficit projections, the first since last December’s tax cuts and February/March spending increases were approved by Congress.  Theses show the deficit ballooning to $804bn this fiscal year (ending Sep 30) from $665bn last year and to over $1tn in 2020. A decade from now the deficit is projected to reach $1.5tn (about 8% of current GDP) and public debt rise to $33tn by 2028 from $21tn now, almost 100% of GDP.  The upshot is that there is a strong chance the US will suffer a further ratings downgrade before too long (the last was in August 2011). The numbers also serve as a reminder of the pressure that will be bearing down on the US dollar in the quarters and years ahead from the ever expanding ‘twin deficits’. 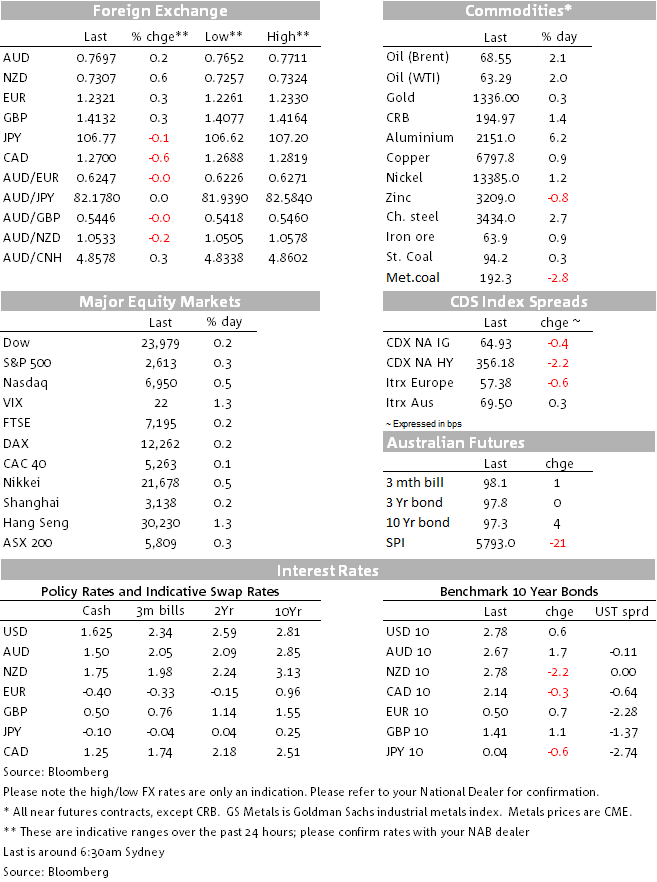