Markets Today: And the beat goes on

The Whispers’ 1980 hit “And the beat goes on” narrowly pipped Michael Jackson “Beat it” for today’s title. In what has been a lacklustre day in bonds and currency markets, US equities have closed higher for a second day in a row boosted by another round of better than expected earnings reports. Light volumes is a theme across markets, reflecting investor’s weariness amid still simmering trade and geopolitical tensions.

US equities enjoyed another day of positive returns (DJ 0.87%,S&P500 1.07% and NASDAQ1.74%) initially aided by better than expected earnings results by Netflix (reported after the bell yesterday) followed by beating outcomes from Johnson and Johnson and Goldman Sachs. IT (2.01%) and Consumer discretionary (1.87%) sectors were the big US winners on the day. European equities also closed in positive territory led by gains in IT and Materials sectors.

Yesterday during our APAC session, China was the focus (GDP and activity data) and it remained the case during the European session. In the European morning, headlines hit the screen revealing China’s  countermeasures against US trade tariffs with a 178% ‘anti-dumping deposit’ on US grain sorghum, but in a more conciliatory move China also announced plans to ease the limits on foreign investment in its auto and aircraft sectors, as previously foreshadowed by President Xi.

Sticking with Europe, UK labour market data were on the strong side (unemployment down 0.1% to 4.2%), but headline earnings did not rise as much as expected (unchanged at 2.8% 3M y/y vs 3% consensus). Meanwhile, the German ZEW (analyst) survey showed another drop in its current and expectations indices. Although the ZEW survey tends to be more reactive to equity moves rather than give a good leading signal, the softer than expected headline numbers appears to have been a contributing factor for the decline in European bond yields (10y bunds -1.8bps to 0.507%), despite the improved risk appetite evident in the equity market. Reports of an increase of ECB bond buying  also played into the move lower in yields. Later in the US session, longer dated UST yields continued to drift lower ( 10y UST – 1.30 to 2.82% and 30y -2.6bps to 2.99%) while front end yields edged a little bit higher ( 2y +0.9bps to 2.388%), flattening the curve.

The flatter yield curve also caught the attention of Fed Williams, the soon to be NY Fed head,  who noted that “the flattening of the yield curve that we’ve seen so far is a normal part of the process, as the Fed is raising interest rates…I don’t see the signs yet of an inverted yield curve”.  He did caution though that an inverted curve “is a powerful signal of recessions” (an inverted US yield curve has predicted almost every US recession since 1950, but we wonder whether QE is currently a distorting force). On inflation Williams noted that inflation will be held down by global factors, but sees US inflation at or above 2% for “another couple of years”. Also speaking overnight, Fed Evans said that he didn’t “foresee an outsized risk of a breakout in inflation” adding that “I don’t think 2.25% is something to get our nose out of joint over”.

As for currencies, it has been yet another day of relatively subdued moves. The USD is stable in index terms and CHF has been the big mover, probably reflecting an ease in safe haven demand amid positive European and US equities returns. Of some note, EUR briefly traded above the 1.24 mark for the first time since March 28, but then it fell down to 1.2336 on the back of softer German data (EUR now trades at 1.2370). GBP rose to 1.4377 – a post Brexit high – before the headline earnings miss saw a partial retreat. We continue to think GBP has more in the tank bigger picture via a general re-pricing that should pressure EUR/GBP lower and perhaps GBP/AUD higher.

AUD traded to an overnight high of 0.7791, but then it followed the EUR decline and now trades at 0.7766. Meanwhile after trading to an intraday high of 0.7372 yesterday, NZD/USD essentially drifted lower overnight. The pair traded to an overnight low of 0.7328, then the Global Dairy Trade auction overnight showed a 0.9% increase in whole milk powder price, which provided a brief 10 pip boost to the NZD and now the pair trades at 0.7341, at the upper end of its trading range this year. Of note as well, the AUDNZD has continued to drift higher, it briefly poked its head above the 1.06 mark and now trades at 1.0593.

In other news, US Treasury Secretary Mnuchin tried to row back on Trump’s comments yesterday that China and Russia were “playing the FX devaluation game” by saying it was merely a “warning shot” not to engage in FX devaluation going forward. The IMF the left its 2018 and 2019 global forecast unchanged at 3.9%, but it painted a more subdued outlook in the outer years, projecting global growth will fade as central banks tighten monetary policy, the US fiscal stimulus subsides, and China’s gradual slowdown continues. The IMF also noted that “Conflict could intensify if fiscal policies in the United States drive its trade deficit higher without action in Europe and Asia to reduce surpluses,”

China cuts the RRR for qualified banks by 100bps in order to allow them to repay loans they took out from the PBoC via medium-term lending facilities. Around CNY900bn ($143bn) will be repaid with an additional CNY400bn unleashed. China said that the objective is to maintain liquidity at reasonable and stable levels and the RRR moves does not suggest any significant change in policy. China says it still needs to maintain relatively high RRR to fend off financial risks. 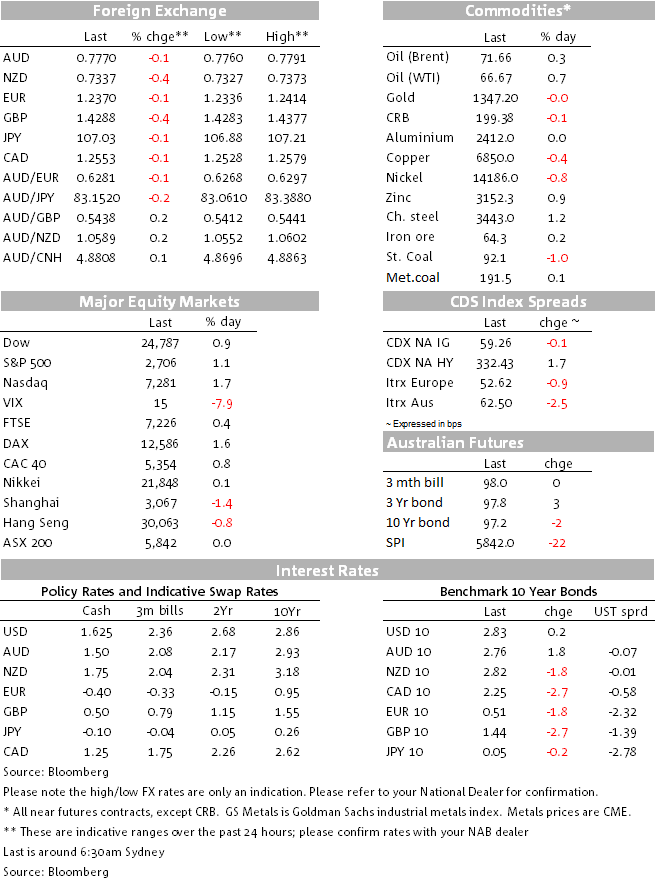