Phil Dobbie talks to NAB’s Tapas Strickland about what he was trying to say. Plus, the response to US Treasury auctions, what to expect from the Fed minutes, the latest expectation on Aussie rate rises and what’s the story with oil?

It’s all been a rather contained session overnight with most attention centred on the first slab of this week’s US Treasury supply deluge with the US back on line after the long weekend.  The USD has re-captured some more ground in the face of the overnight Treasury auctions, the market seemingly putting to one side any widening deficit concerns, for now anyway. Major currencies have generally lost a little ground against the USD, though remain well within recent ranges.  For example, the AUD, is just below 0.79 this morning after trading just over the figure yesterday,. The Bloomberg spot US dollar index is 0.57% higher.

It’s been a mix of fortunes as far as stocks are concerned.  European stock indexes were generally higher, but the FTSE lagged, BHP Billiton and HSBC marked down after announcing results.  In the US, it’s been the tech sector leading the way, the Nasdaq outperforming, tech stocks among a minority of sectors supporting the S&P that’s in the red in the last hour.  Among under-performing stocks on the day, Walmart shares came in for some large selling, stock down 9.4% for the session after reporting declining online sales growth.  No prizes for guessing which stock might be gaining further at Walmart’s expense.

It was very light for data overnight.

The market has been focused on the heavy wave of US T-bill and Treasury bond issuance this week, the start of a step-up increase in supply ahead from the widening of the US budget deficit.  Additional Treasury supply is also coming to the market courtesy of the Fed gradually reducing the size of its balance sheet and the US fiscal deficit widening.  It’s been a very quiet and measured session with little in the way of market theatrics as far as the Treasury auctions were concerned.  In the lead up to the auction, US Treasury yields had been pushing up during the Asian trading session, the 10-year Treasury yield then last night rising to a high of 2.925%, before drifting back down to 2.89% just ahead of the 3-mth and 6-mth T-bill auction.  That’s about where it sits as we go to print.

The overnight auctions were centred on shorter-term securities, most with maturities less than one year, $28bn of two year note and the remainder shorter term among $179bn auctioned overnight.  The bid-cover ratio for the 3-month auction wasn’t great but it improved for the 6-month auction, indirect bidders for that tranche up to 60%, this group including foreign central banks, a positive.

In the aftermath of the overnight global dairy auction, the NZD has also traded in a tight range overnight, drifting a little lower against the USD along with other major currencies.  The overnight GDT dairy auction was expected to show a fairly flat result and that was the case, with the average price index down 0.5% and whole milk powder prices up 0.3%.  This follows strong price gains earlier this year.  Our BNZ colleagues aren’t optimistic about pricing for the months ahead, as large EU stockpiles of skim milk powder continue to overhang the market and elevated EU milk production remains a headwind that is likely to persist.  One currency that has outperformed to an extent overnight has been sterling, with more chatter around the prospects for a bespoke trade deal with the EU.

With China out for another day, the full extent of the AUD’s commodity price support won’t be again fully evident until tomorrow onward.  There will though be a lot of focus on today’s wage price index for Q4 after it undershot expectations in Q3 when the expectation was that it then might have been boosted by the 1 July 3.3% increase in the minimum wage.  It’s conceivable that flow-through could have been delayed and thus spill over into Q4.  NAB looks for steady 0.5% growth (also steady at 2.0%).  A 0.6% print might not bolster RBA wage rise hopes too much, the Bank having noted in its SoMP that Q3 might have been depressed somewhat by “temporary” factors.  A 0.4% point might well see a larger immediate market effect, lower as it would be despite the improving labour market and the minimum wage.  All will be revealed at 11.30.  A big negative in Construction  Work Done (we think -15.5%) would simply reflect the washing out of last quarter’s LNG major facility imports, the underlying trend supported by strong infrastructure spending and high building construction. 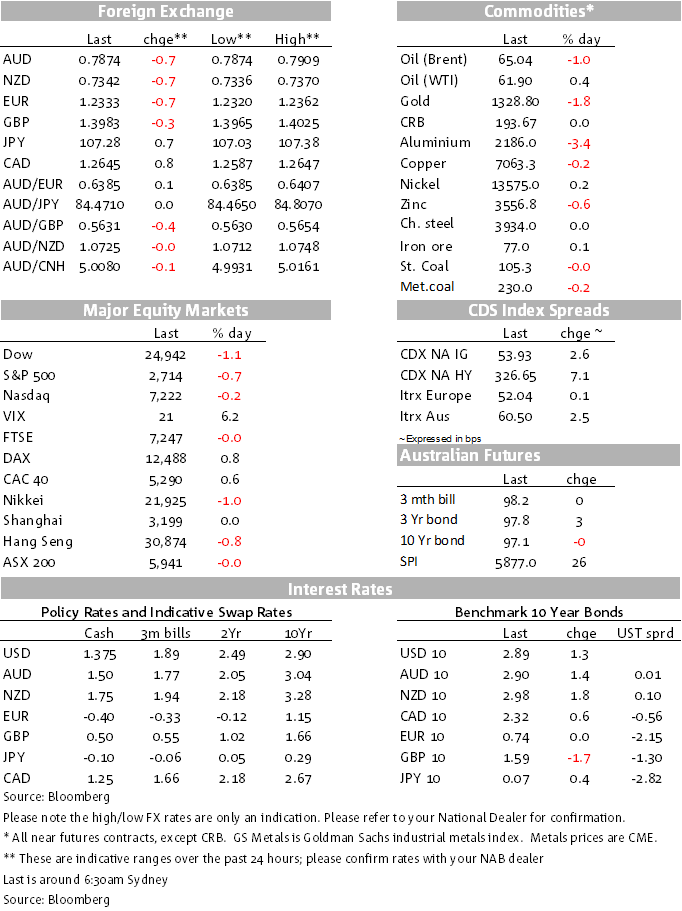