It will be no surprise that the Fed has lifted interest rates this morning. Perhaps the tone was more hawkish than expected in Jay Powell’s first meeting as Fed chair.

Phil Dobbie talks to NAB’s Ray Attrill about the path for future hikes, with the Fed expecting to reach 3.4% by the end of 2020.

The US dollar is softer (hence AUD higher) and, following the conclusion of Fed chair Jay Powell’s inaugural press conference, bond yields are slightly lower.  If one reason for this is the failure of the ‘median’ Fed dot for 2018 to rise from 3 hikes to 4, then this is arguably an unjustified reaction.  The ‘mean’ of the now-15 FOMC member projections rose by 18bps and three of the four ‘matched sample’ members who were indicating 3 rate rise in December are now at 4.  For 2019, 3 rather than 2 rate rises are indicated and for 2020, 2 rather than 1.5 (the latter the literal interpretation of the prior median dot).

The Fed has upgraded its projections for growth this year and next, by 0.2% and 0.3% respectively, to 2.7% and 2.4% with the fiscal stimulus implied by the December tax cuts and February spending increases clearly figuring in the Fed’s upgraded outlook, alongside acknowledgement in the Statement that the economy ‘has strengthened in recent months’ and which figures in the latest post-meeting statement.  Unemployment is now seen falling to 3.8% this year (3.9% previously) and 3.6% in both 2019 and 2010 (from 3.9% and 4.0% previously). These numbers are almost a full percentage point below the Fed’s latest estimate of NAIRU (4.5% down from 4.6%).

In his press conference, Mr Powell sounded optimistic on productivity improving, in part as a result of the impact on the tax cuts in both stimulating more business investment and incentivising more people to re-enter the workforce.  We’ll have to wait for the minutes of today’s meeting, but this may lie behind the FOMC decision to lift the ‘longer run’ median dot by 1/8% from 2.75% to 2.875%.

Mr Powell sounded much less concerned, when asked, about the risk of fiscal stimulus overheating the economy and the Fed having to tighten policy to the point it risked tipping the economy into recession.  He noted that the 2020 ‘dot’ was only 40bps or so above the longer run dot.  Some note can be made too of the new inflation projection showing core PCE rising to 2.1% in 2019 and 2020 (from 2.0%) and headline to 2.1% from 2.0% in 2020. This may be a sop to the Fed’s declared intent to treat the 2% inflation goal as symmetric. If so, perhaps the implied willingness to project – and so tolerate – a period of above-target inflation, accounts for the more considered USD negative/lower bond yields market reaction?

Outside of the Fed, a few things going on of note:

Oil is up $2 or more (Brent +$2.44 to now just shy of $70 once more, WTI +$2 to $65.50) on news reports that the American Petroleum Institute calculates a big draw in crude stocks last week against expectations for a significant build. Let’s see if that’s confirmed in more official figures later tonight.

The British pound found support from stronger than expected average earnings growth in the latest labour market statistics, to 2.8% in January (3m y/y) from an upward revised 2.7% and versus 2.6% expected.  The market now awaits hints from the bank of England tonight that a May rate rise is to be expected.

Trade protectionism news is mixed.  There are reports that the EU and Argentina could, for the time being, be exempted from steel and aluminium tariffs due to come into force of Friday alongside Australia, Canada and Mexico. On the negative side, the WSJ reports that China is prepared to retaliate against US import tariffs with a “measured and proportional response” depending on how broadly-based US tariffs are. According to sources, China seeks to avert tariffs by warning of possible repercussions and offering incentives to the US including better access to China’s markets, especially in the financial sector.  The White House plans to announce new tariffs against China later this week (quite possibly tonight).

Finally the RBNZ has just delivered the full expected non-event of the day, leaving the cash rate at 1.75% and saying it sees policy on hold ‘for a considerable’ period. NZD reaction (or rather lack thereof) is swamped by the USD-negative response to the Fed. 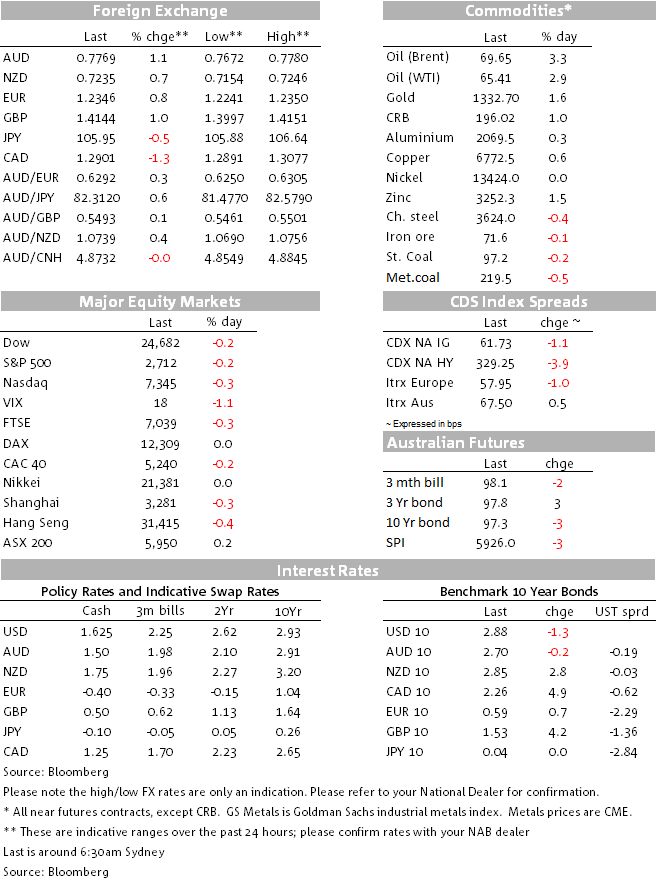