Phil Dobbie asks NAB’s Ray Attrill what impact the news could have on the markets this week, after a rally on equities at the end of last week.

A particularly good day for US stocks on Friday, the S&P500 gaining 1.6% with all sectors in the green and meaning that the index has now recouped more than 50% of its early February (10.1%) fall to be only 4.4% off from its 26th January record high (and the Nasdaq a mere 2.2%).  The VIX has also retraced more than half its January-early February jump from 9.25 to 37.3, now -56% off the latter at 16.5. In contrast bond volatility, which rose by 31% between mid-January and early February, is back only 7% from its recent highs and FX volatility only 10% lower after rising by 56% between 9th January and 6th February.  We’d still judge we’ve entered a period of permanently higher asset class volatility versus post GFC, central bank liquidity driven, norms.

US Treasury yields were under downward pressure almost from the time we left for the weekend on Friday and continued falling throughout the European and North American sessions. 10s ended in NY over 5bps lower at 2.87%, in turn a supportive influence, it would seem, on US equities.  The Fed delivered its Monetary Policy Report to Congress on Friday, a head of new chair Jay Powell’s testimonies to both House and Senate committees on Wednesday and Thursday, and there was evidently nothing in here to frighten the bond or equity horses. While noting that the labour market appears to be at or ‘a little beyond’ full employment, there was no sign of elevated concerns about wages growth or inflation or – at this stage – the likely path of Fed policy.

One passage that may or may be significant said that “….with inflation having persistently run below the 2 percent longer-run objective the Committee will carefully monitor actual and expected inflation developments relative to its symmetric inflation goal”.  The first part of this sentence hasn’t appeared in the post-FOMC statements to date, even though ‘symmetric’ has been there since March last year.

Also notable in Friday’s statement was a fresh warning about asset prices:

“…Valuation pressures continue to be elevated across a range of asset classes even after taking into account the current level of Treasury yields and the expectation that the reduction in corporate tax rates should generate an increase in after-tax earnings. Leverage in the nonfinancial business sector has remained high, and net issuance of risky debt has climbed in recent months”.

Monetary Policy report aside, the only Fed-speak on Friday came from San Francisco Fed President Williams who said “three to four” rate increases was the “right path”.  The US money market is not yet ready to flirt with the idea of more than three.

News late in the NY day Friday that President Trump was disposed towards imposing 24% tariffs on steel imports and 10% on aluminium came too late to have much impact on markets though it looks like AK steel, Alcoa and other US metals producers jumped after the 4pm official stock market close.  Nor too did the news that Rick Gates, right-hand man to Trump’s election campaign manager Paul Manafort, had pleaded guilty on conspiracy (to defraud) charge as part of a plea bargain. Markets are likely to gloss over the latter, but might fret somewhat in our part of the world about the former.

While an announcement from the White House on tariffs does not have to come until April 11 (steel) or April 19 (aluminium), there is an election for a vacant Congressional seat in the Pennsylvania 18th district on March 13. The election is being viewed as a bellwether for the November mid-terms.  Many steel workers who voted for Trump because they believed he’d be a boon for the industry are reportedly feeling abandoned by the president. Watch this space.

In FX, Friday’s big ‘winning trade’ would have been long CAD/SEK (+1.3%). This was from a hit to SEK on Minutes from the last Riksbank meeting indicating no tolerance of sub-target inflation and which saw expectations for the first rate rise pushed back, and a boost to CAD after Canada’s January CPI came in 0.2% above expectations (0.7% for 1.7% y/y against 1.5% expected).

There looks to be a broader story here, namely that while inflation may be stirring in North America it ‘aint (yet) in Europe or the rest of the world. While Friday’s FX price action suggest the right FX strategy should be to buy currencies in countries where inflation is rising and sell the rest, this likely only applies in the case of the US dollar if markets become convinced the Fed is not going to tolerate inflation poking its head much above 2%.

After CAD, The GBP was the second best performing currency on Friday, for no obvious reason, though may well draw some support at the start of the week from weekend press comments from new BoE deputy governor Sir Dave Ramsden, writing in the Sunday Times that “relative to where I was, I see the case for rates rising somewhat sooner rather than somewhat later.”  Ramsden was one of only two MPC members who dissented against last November’s BoE rate rise.  This will consolidate believe the BoE is gearing up to lift rates in May unless something bad happens in the interim. If open reason for GBP strength was the reports of an outbreak of peace among a hitherto divided UK cabinet on Brexit, then note European Council President Donald Tusk has quickly rubbished the reported UK stance as “pure illusion”.  More detail on the government’s planned approach should be revealed on Friday when May gives a long awaited speech on Brexit.  Ahead of that, Labour leader Jeremy Corbyn will set out his party’s planned approach to Brexit tonight, which will indicate their intention to remain within the customs union (by way of a new treaty).

The US dollar finished higher on Friday in narrow DXY terms on both the day (+0.16%) and week (0.88%); the broader BBDXY was virtually flat on Friday but up 0.67% on the week. NZD has given g back some of its recent outperformance (-0.5% on Friday and -1.1% on the week) while AUD was virtually unchanged on Friday but 0.8% lower on the week. CFTC/IMM  FX positioning data for the week ending Tuesday February 20th shows little notable movement (spec. market still modestly net short USD) save that the non-commercial JPY net short has still hardly moved despite two weeks of JPY appreciation. If it doesn’t show up next week, it will only serve to highlight the scope for additional JPY strength.

Commodity prices  were mostly lower Friday and also on the week, perhaps helped by a the firmer USD. Oil prices in contrast gained on Friday, building on a now two-week old rally, on news of a shutdown at a major Libyan oil field from a wages dispute (600k barrels) and after Thursday’s EIA inventory data showed a 1.6mn.barrels draw on crude stocks.

A slow start to a busy data/events week with an appearance by ECB president Draghi before the EU parliament today’s main event. EZ preliminary CPI data is on Wednesday 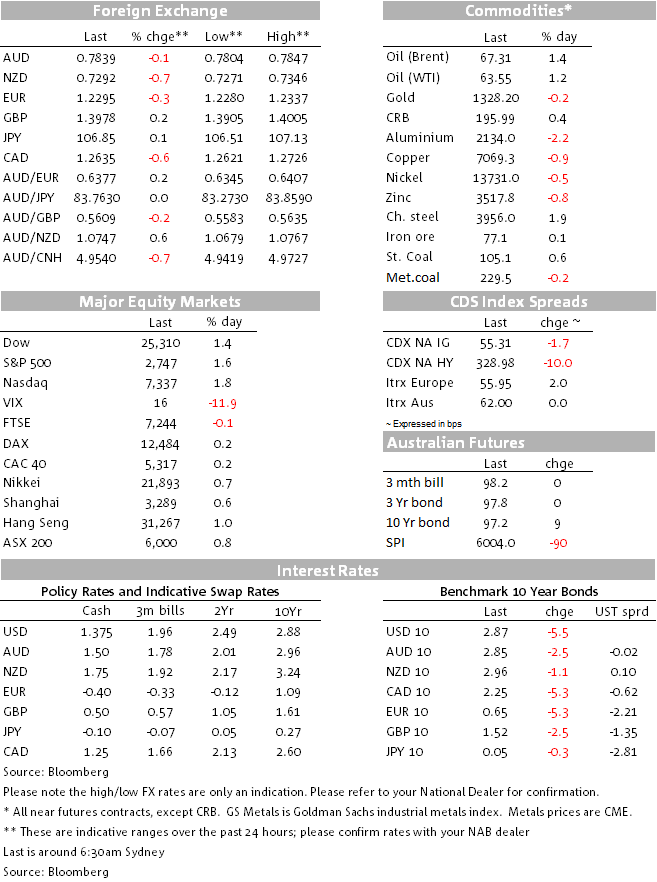