There’s been a swift reaction to Jerome Powell’s hawkish sentiment during his congressional testimony this morning. He said headwinds had become tailwinds.

We arrive this morning with the AUD/USD back close to 0.78 (it’s just below the figure as we go to print), pushed back by a stronger USD in the wake of Fed Chairman Powell’s maiden testimony on monetary policy and the economy to Congress, last night’s to the House, the Senate testimony coming on Thursday.  US Treasury yields are a net ~4 bps higher for the session, spiking higher on hints from Powell alluding to the possibility of an increase in the median dot plots from three to four hikes this year at the upcoming 21 March Fed rate meeting.

His prepared opening formal statement (released 90 mins before he appeared) gave an upbeat assessment of the US economy.  On the outlook for policy, his statement noted that the Fed seeks to strike a path between avoiding an overheating economy and putting PCE inflation on a sustained 2% path.  It’s been a while since the Fed’s been speaking openly of an overheating economy and it says something about how positive (worried even from an inflation viewpoint?) the Fed is about the US economy.  The Statement went on to note that some of the headwinds facing the US in the past few years (i.e. fiscal policy and foreign demand) had turned into tailwinds more recently.  He said the Fed expected inflation to return to 2% and stuck to the line that “gradual” rate rises were warranted.  “As always, the path of monetary policy will depend on the economic outlook as informed by incoming data.”

There was little reaction initially to Powell’s written testimony, but US Treasury yields jumped as Powell alluded to the potential for a shift higher in the median ‘dots’ at the upcoming March meeting.  In response to a question about the likely number of hikes for this year, Powell said that “since December, what we’ve seen is continuing strength in the labor market and data that adds confidence to my view that inflation is moving back up to target, fiscal policy more accommodative, foreign demand holding strong – but I wouldn’t want to prejudge the March dot plot.”  Four Fed officials would be needed to lift their ‘dots’ from three to four hikes at the upcoming March meeting to lift the median expectation to four.  Upcoming economic report take on extra significance, first with tomorrow night’s January PCE deflators and non-farm payrolls report at the end of next week for what it says about wages and inflation risks.

Other watch points at the 21 March meeting will be whether the Fed raises its estimate of the long run expected Fed funds rate – dependent on the long run growth outlook for the economy – and their estimates for the full employment NAIRU rate.  On the latter, the December FOMC estimated that at 4.6% against the actual rate of 4.1%, so beyond full employment as noted in Friday’s written report to Congress.  Powell said that his estimate was in the low 4s.  If that estimate of NAIRU is not lowered, that would signify more confidence they’re beyond full employment with its attendant wage and inflation risks.

Meanwhile, it was a mixed set of reports released on the US economy.  The star was the Conference Board’s Consumer Confidence report for February that shot the lights out at 130.8 (L: 124.3; F: 126.5) with a new high for this cycle and the highest since 2000.  The labour net jobs plentiful index turned even more positive and was also the highest since early this century, since 2001.  An indirect measure of business confidence, the US durable goods orders report for January though underwhelming expectations, core orders down 0.2% after a 0.6% December decline.  This was much more positive through most of last year and a slight disappointment for those looking for continued signs of lifting US productive capacity or a post-tax cut immediate boost.  It’s by nature a jumpy series but it’s something the Fed will be paying close attention to for not just for what it means for growth now but longer term by potentially lifting the supply side of the economy.  Also released were preliminary trade data for January seeing a higher than expected deficit (import growth outpacing export growth), unhelpful to near term growth estimates and the politics of trade.  The Atlanta Fed lowered its estimate for Q1 GDPNow from 3.2% to 2.6%.

Ahead of Eurozone preliminary February CPI tonight, German inflation missed expectations by a tenth, coming in at 0.5%/1.2% against 0.6%/1.3%.  This report put the EUR on the back foot ahead of Powell’s dollar-supportive appearance.  Bundesbank President Weidman, a well-known hawk, said he wanted QE to end this year (which is no surprise).  On the prospect for rate hikes, he sounded more evasive/perhaps hawkish, noting that “the market has certain expectations on a possible interest-rate change in 2019, based not only on the dataset, but also on our communication, and these expectations are – I’d say – not completely unrealistic.” 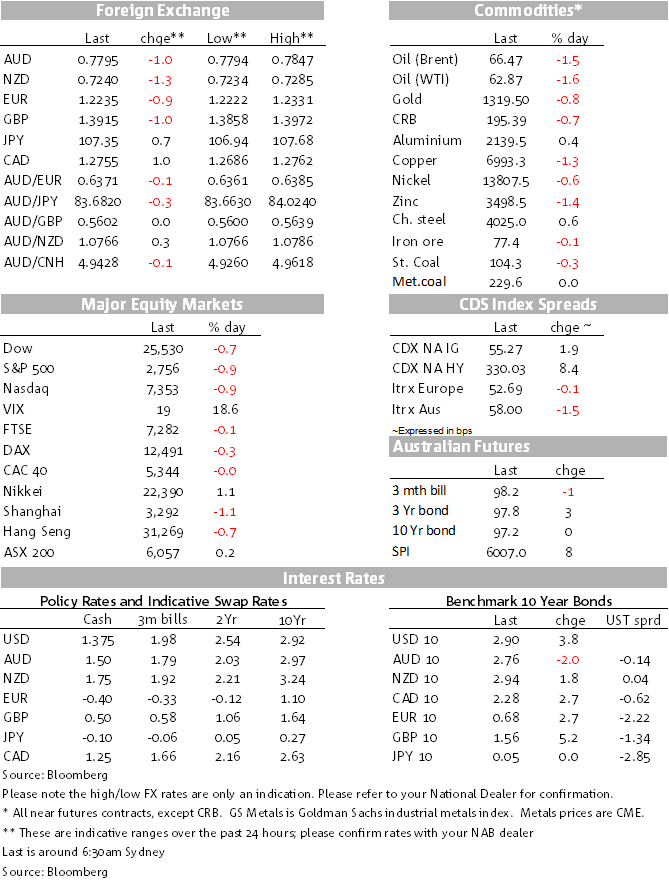