The US federal Reserve lifted interest rates this morning, as expected.

Market responses to the Fed’s 4:00 AEST pronouncement has been clouded by news very soon thereafter that President Trump will tomorrow unveil a list of up to $50bn worth of imports from China to be hit with tariffs. Not that this is really ‘new news’ but it has had the effects of reversing all of the roughly 0.5% gain in the US dollar, seen US Treasury yields pare about half of their immediate post-FOMC gains and pulled the S&P500 down further into negative territory on top of initial post-Fed losses motivated by the apparent need to incorporate the risk of a somewhat faster pace of Fed tightening, as implied by the new Fed ‘dots. The S&P closed 0.4% lower.

The US Federal Reserve hiked interest rates 25bps as widely expected, for the seventh time in this cycle, taking the Fed funds target range to 1.75%-2.0%. The FOMC also upped its rate hike profile via its ‘dot’ projections which now foresees four hikes in total in 2018, an unchanged three further hikes in 2019 and one in 2020. That leaves the 2018 median dot point at 2.375% from 2.125%.

The FOMC statement shifted the characterisation of economic activity to ‘solid’; from ‘moderate’ and has dropped the paragraph that previously said that “the federal funds rate is likely to remain, for some time, below levels that are expected to prevail in the longer run”. In short, because we are getting closer to ‘neutral’ which the Fed still puts at 2.875% (1% above the new current rate mid-target rate of 1.875%).

In his press conference chairman Powell said the economy was doing “very well.” He will now hold a press conference after each six-weekly meeting from January – which he said is for communication and has no inference for monetary policy.

Following a mention in the May FOMC Minutes, the Fed also raised the rate on excess reserves parked at the Fed (IOER) by just 20bps. This is a technical move at this stage, given the effective fed funds rate has of late been trading in the upper half of the target range, with it being too early to draw conclusions on what this may mean for Fed balance sheet reduction. Indeed Chair Powell said the Fed “needs to have the fed funds trade in a range and that’s what this minor adjustment accomplishes …don’t expect it to happen again and again.”

The news broken by the Wall Street Journal soon after the Fed announcement is that the U.S. is preparing tariffs on ‘billions of dollars’ of Chinese goods as early as Friday, with the decision awaiting Trump’s final approval and the exact amount of good to be subject to tariffs yet to be finalised.  What’s notable for markets is that despite the intention to ‘Make America Great again’ via the various actions designed to reduce US imports and spur more US exports, the FX market has consistent responded to escalating tariff frictions by marking down the USD, suggesting a vote of no confidence in policy coherence and allied to a belief that the US may end up doing its own economy more harm than good.

For the AUD, the initial weakness from above 0.7600 to below 0.7550 (low of 0.7530) on the pop higher in the US dollar post Fed has reversed by about 50% as the USD gave back all its Fed-related gains on the tariff story.  Not that it is a good news story for the AUD by any stretch of the imagination, save that if China ends up more dependent on domestic industrial activity to preserve growth, this can support demand for commodity imports. Indeed, there have been some signs of this in recent months, in the face of apparent deepening worries inside China of the US-instigated tariff ‘war’ escalating further. Let’s see what today’s China industrial production numbers suggest in this regard (see ‘Coming Up’ below).

In Brexit news, the UK government narrowly defeated the Lords Amendment that would have compelled it to include remaining in the Customs Union in its negotiations. This though doesn’t rule this out as an eventual outcome, while the bigger (Sterling positive) outcome of this week’s Commons events is that May has given assurances that Parliament will have a meaningful say in whether whatever deal May brings back from Brussels is acceptable. GBP is actually flat relative to Tuesday’s New York closing level. 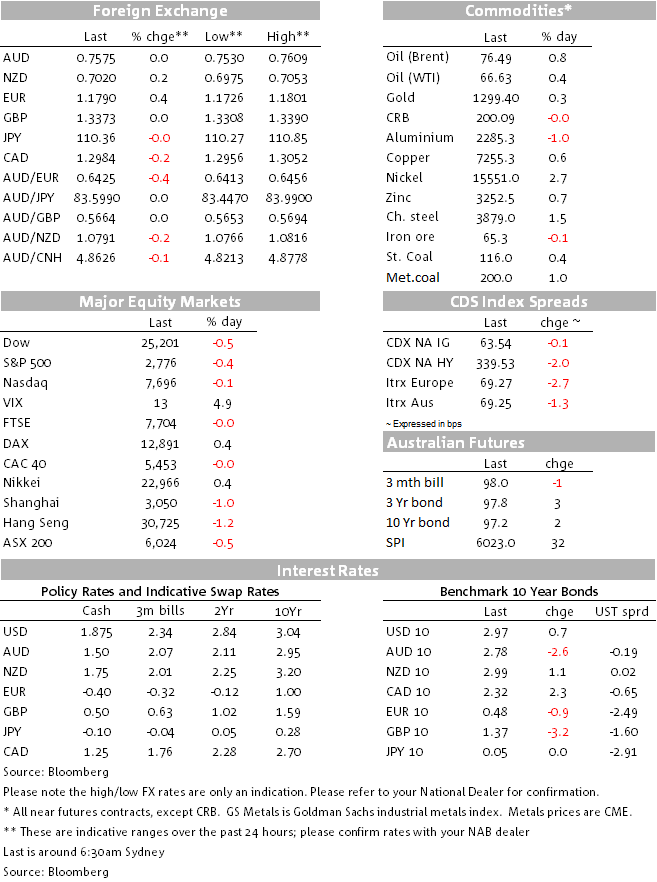