Tapas Strickland suggests the markets are getting used to the US President’s style and that could ease concerns over future Trumpisms.

After a brief positive start US equities have ended the day in negative territory, the USD is stronger across the board and UST yields are lower with the move led by the back end of the curve. Oil prices are higher after Israel accused Iran of having a secret plan for building nuclear weapons and in general there is a sense of cautiousness as the market awaits  for Washington’s decision on whether or not the EU will face the new tariffs on steel and aluminium.

The USD has started the week on a strong footing partly aided by solid domestic data releases. Politics and softer data releases weighed on European currencies while a looming US EU trade tariff decision along with US-China trade talk news have not helped risk sensitive currencies. In index terms the USD is up around 0.35% on both DXY and BBDXY with SEK and commodity linked currencies the big underperformers.

As expected the March US core PCE reading (the Fed’s preferred inflation measure) printed at 0.2%m/m taking the yoy print to 1.9%. Base effects were the primary driver for the 0.3% jump in the yoy reading to 1.9%, but notably the six-month annualised figure has also picked up over recent months and is now running at a 2.3% pace. The move higher in the PCE reading has been flagged by some Fed officials and after a prolong period of inflation printing below the 2% target, for now the general senses is that the Fed will allow inflation to run marginally above target for some time. Still, the main takeaway here is that unlike other economies, US inflation is now essentially on target and the prospect is for inflation to rise further over the coming months. Thus if this trend continues as expected  the risk is that the Fed will need to do more tightening and not less.

Early in the session the USD was on the rise amid softness in European currencies, the USD briefly traded lower after the PCE release, recovering most of the lost ground before the NY close. March German retail sales disappointed ( -0.6% vs 0.8% exp.) while soft German (Apr: 1.4%y/y vs. 1.5% exp.) and Italian ((Apr: 0.6y/y vs. 0.8% exp.) inflation readings didn’t help the euro either. Politics were an additional hindering factor after Italy’s Five Star head Luigi Di Maio called for new elections in June. EUR traded to an overnight low of 1.2064 and now trades at 1.2080, down 0.41% over the past 24hrs.

GBP also opened the European session lower following earlier news that Amber Rudd, a key ally of UK PM May, had resigned and was replaced by euroskeptic Sajid Javid as home secretary. Meanwhile the EU’s chief negotiator Barnier said that Brexit talks could yet fail as the EU and UK grapple with the Irish border issue. The pound initially traded to a low of 1.3713, but latter in the session it recovered a little and now trades at 1.3765. SEK has been the biggest loser, down almost 1%, the pair remains under pressure after last week’s Riksbank decision to push back on a plan to raise interest rates for the first time in seven years. SEK now trades at 8.7426, its weakest levels since June last year.

Antipodean currencies have also underperformed with both AUD and NZD down about 0.7% since Friday’s close. NZD now trades at 0.7035 and on the chart it looks like it has room to trade lower. Meanwhile the AUD currently trades at 0.7530 with the December low of 0.7509 still looking like a key support level. Jason Wong, our BNZ strategist noted that yesterday New Zealand’s ANZ business outlook survey showed a modest softening in activity indicators, but it still feels like businesses are grumpy about the direction of government policy than anything too sinister. That said, overall, the AUD and NZD are probably a little bit under pressure amid market cautiousness ahead of the US-EU trade tariff announcement. Also overnight and ahead of US trade  officials meeting with China counterparts, the NY Times reports that China will refuse to discuss Trump’s two toughest trade demands, namely the mandatory $100b cut in U.S.-China annual trade deficit and curbs on China’s $300b plan to support the country’s industrial upgrade into advanced technologies.

Geopolitics in the Middle-East have also not helped sentiment after Israel accused Iran of having a secret plan to continue building nuclear weapons. Brent jumped 0.71% ( WTI +0.51% @$68.45) and now trades above the $75 mark for the first time since later November 2014. Israeli PM Netanyahu said his country has proof Iran had a secret program to build nuclear bombs, and referring to the Iranian deal, President Trump left everyone guessing saying that US would quit the accord by May 12, the deadline he’s set for a decision, only to add “That doesn’t mean we won’t negotiate a real agreement.”.

Looking at other commodities, iron ore closed essentially unchanged at $65.7, coal prices had a good night, up between 2% and 3% while gold is a touch lower and copper a smidgen higher. 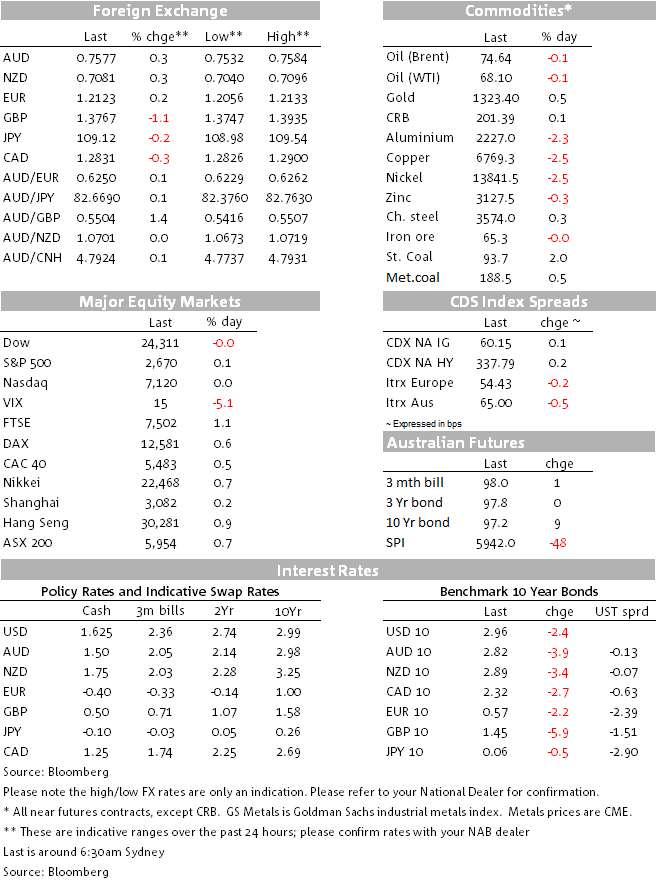