Markets Today: Markets a little testy ahead of payrolls

The S&P500 fell a lot in early trade, testing some technical levels before regaining most of the ground. The US dollar has also retreated.

The market is continuing to look for that somewhat elusive inflation beacon and from a US standpoint, payrolls will be next to watch and whether earnings growth can get a three handle.  Adding a little more softness that ensued after the FOMC announcement yesterday (signalling some tolerance for inflation overshooting 2% for a time), the USD has ahead of payrolls been pulling back further overnight in something of a choppy night for currencies and risk asset markets, equities lower in Europe and mixed in the US with the Dow virtually steady but the S&P and Nasdaq marginally lower.  Oil prices made some gains, as did gold, but base metals were mostly lower.

In the currency space, if there’s been any out-performer it’s been the yen, dollar indexes lower, the Euro and Sterling also struggling for traction.  The AUD trades this morning at 0.7531 ahead of the RBA’s latest set of inflation, growth, and unemployment forecasts at 11.30 and payrolls.

Both the Chinese and US sides are remaining tight-lipped on the progress of trade talks this week in China as the White House team of Mnuchin, Ross, Lighthizer and Kudlow meet with their Chinese counterparts.  While both sides have expressed the willingness to engage and talk, each has their own positions and priorities.  As my BNZ colleague Jason Wong has reported this morning, weekly data from the US Department of Agriculture showed Chinese traders are already shunning American soybeans, having cancelled some import commitments, opting to buy more from Brazil instead.  Expectations are low for a break-through in negotiations.  Earlier in the week President Xi said that China must firmly control major technologies and rely on domestic innovation, suggesting that the country won’t accept US preconditions for negotiations.

The US goods and services trade balance for March came in at a lower deficit of $49bn, broadly in line with expectations given the already released goods-only balance. The report though did reveal the deficit with China widening by 16% y/y to $91b for the March quarter.  Exports rose 2.0% while imports fell 1.8% after previous strength, those rises perhaps to beat tariff increases.

While the US trade report was close to expectations, the US ISM Non-Manufacturing report for April was slightly shy of expectations, but the prices paid component remained high.  The headline index came in at 56.8, down from 58.8, the market expecting 58.0.  The prices paid component rose 0.3 points to 61.2, resonating with prices paid in the Manufacturing release that rose 1.2 points to 79.3.  While businesses were reporting labour shortages and rising steel prices, the follow through from the Q1 first cut of US unit labour costs also showed some rise to 2.7%, up from 2.1% though shy of the 3.0% tipped and with Q4 revised down from 2.5%.  It’s still very much all to play for on the inflation front in the US, the market now to fixate on tonight’s April payrolls report, especially for mine the growth in average hourly earnings.  I still have resonating in my ear, ex-Fed Vice-Chair Stanley Fischer’s signpost of 3% growth in wages as a clearer sign of inflation being more on track to a sustained 2% path.  Remember that the Fed is behind on its longer term inflation run rate, the PCE deflator having averaged 1.5% for the past eight years.  The RBA meanwhile has averaged 2.2%, so still broadly on track in that sense.

While the US dollar struggled for traction overnight, the Euro was not being bought either.  Eurozone CPI for April undershot expectations, headline CPI at 1.2% down from 1.3% (and expected 1.3%).  Core CPI was the really big surprise coming in at just 0.7%, the equal lowest since March 2017 and well down on last month’s 1.0% and a material miss on the 0.9% consensus.  ECB Chief Economist Peter Praet (a close ally of Draghi) pushed the low inflation story further.  He said that inflation conditions remain subdued and the Governing Council has not yet met the three conditions  – convergence, confidence, and resilience – for a sustained adjustment in the inflation path, which is their stated condition for ceasing net asset purchases. 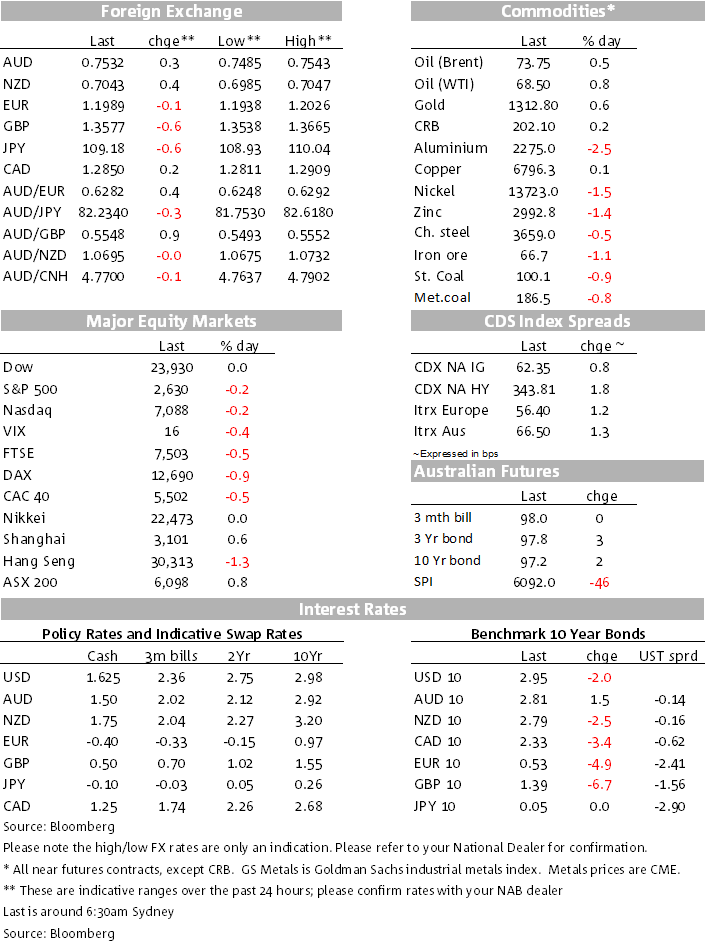