Markets Today: May throws back the gauntlet; China ups sticks

The pound took a hit on Friday. Ray Attrill discusses whether we can expect it to sink further this week, and what that could mean for the Aussie dollar, which also fell slightly at the end of last week.

UK Prime Minister Theresa May’s demand on Friday that EU leaders treat the UK – and its ‘Cheqsit’ proposals – with more respect, has finally gifted us the opportunity to pay homage to the late great Aretha Franklin in titling our daily missive.

Sterling on Friday took over centre stage from the mid-week ‘buy the fact’ response to Monday’s US-China tariffs news. The1.5% loss for GBP/USD in the wake of Thursday’s ‘failed’ EU leaders meetings in Salzburg and aggravated by UK PM’s May’s admission that Brexit talks with the EU were at an ‘impasse’, dragged the DXY dollar index back into a 94 handle and seemingly had some contagion impact on risk sentiment more broadly.

US stocks ended in negative territory, not helped by news that the US administration had prepared a letter for President Trump to sign by way of an Executive Order, instigating an anti-trust probe into various  social media companies (unnamed, but you-know-who).

Treasury yields were lower on the day led by the short end (i.e. bullish curve-steepening) and AUD lost its already tenuous grip back onto a 0.73 handle.  Friday’s CFTC (IMM) futures positioning data, revealing significant extension of USD long speculative positioning as of last Tuesday and including big increases in speculative shorts in both AUD and NZD – the latter to a new extreme – goes someway to helping us understand the extent of the post-tariff news USD sell-off and related AUD and NZD rallies.

On the week, DXY is still 0.74% lower, testament to the risk-positive ‘buy the fact’ rally that followed confirmation on Monday that Trump was proceeding with tariffs on $200bn of Chinees goods at an initial rate of 10% but slated to rise to 25% from January 1st 2019.  SEK was the best performer as markets pre-position for Q4 Riksbank tightening (note NOK was still +1.3% higher on the week even after the sharp post-Norges Bank rate rise sell-off) while AUD and NZD both ended close to 2% higher.

Both AUD and NZD have opened almost half a per cent lower this morning on the weekend news that China has cancelled trade talks with the US.  This really shouldn’t have come as any great surprise after last week’s events, and we suspect this is a dip to be bought back later this morning.

A 2.5% gain for the Shanghai Composite index on Friday brings its gain to the week to 4.3% and meaning it’s now up on the month to date. As well as being another example of the ‘buy the news’ mentality that pervaded most risk markets following confirmation of the latest round of US tariffs on China, there is also an appreciation that China will take (and indeed already is) whatever fiscal and monetary measures are deemed necessary to ensure that its overall growth rate is not going to negatively impacted by whatever hit its export sector takes from the US-Sino trade stoush.  If necessary, this will be at the expense – for now – of efforts to tackle excessive leverage in the corporate sector.

The S&P was virtually flat on Friday with the Dow modestly up but NASDAQ lower as the big social media counters suffered on news of a possible anti-trust probe. All US indices are still higher on the week. Nikkei gains on the week, of 3.3%, coincide with the renewed weakening trend in JPY and improved EM Asia risk sentiment.

Base metals were all higher Friday, led by a 4.3% jump for ‘Dr’ Copper and the LMEX index up a heady 3.6%.  Coal and iron ore were quiet as was oil, while gold lost just less than 1%.  On the week it’s also base metals hogging the headlines with copper +8% and LMEX by 5%. . A bit of the heat came out of coal on the week, both types off just under 2% on the week.  Oil was up ahead of OPEC weekend talks, WTI by 2.6% and Brent by 0.9%. Reports late Friday and on Saturday were suggesting possible agreement to lift output by up to 500,000 bpd but this would be merely to offset recent over-compliance by this amount relative to the target established just a few months ago. 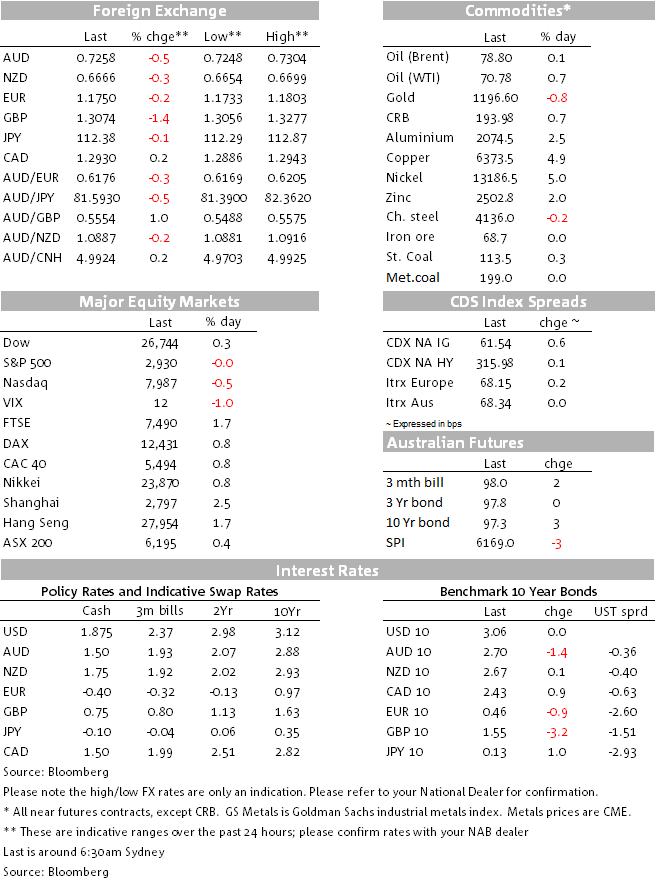