US stocks retreat on Russia meddling, steel/aluminium tariff reports, but still make it ‘6 from 6’ up days.

Phil Dobbie asks NAB’s Ray Attrill whether it will spillover to this week, creating more volatility. They also discuss the significance of Barnier’s Stairway to Brexit, and the importance of Australia’s wage price index this week.

Following five consecutive days of gains, US equities – the Dow and S&P at least -squeezed out miniscule gains on Friday to make it six from six, in front of a three day holiday weekend (Washington’s Birthday). This followed an ‘up’ day for European stocks and the Nikkei – the latter despite the further sharp falls in USD/JPY to new post-2016 lows. On the week, gains of 4.25-5.25% for the main US indices puts them all back in the black YTD. The VIX was little changed (+0.33) at 19.46 and down almost 10 points on the week.  While of course still elevated versus recent years, it is now almost exactly on its long term average (and close to where it began life in 1990).

Also to note in this respect is that while volatility in other asset classes (bonds and FX) didn’t rise in the wake of the spoke in equity volatility by nearly as much as in past episodes, neither have they dropped back as much too. A somewhat higher volatility environment across asset classes looks to be here to stay.

The turnaround in US stocks from intra-day gains of almost 1% to flat followed, coincidentally or otherwise, reports first that the FBI has indicted 13 Russians with meddling in the 2016 US election (charges which relate back to as early as 2014 and didn’t and make no interference that team Trump was involved). Second and perhaps more ominous, was the a report that the US Commerce department is now recommending, among other options, the imposition of 24% tariffs on steel imports and 7.1% on aluminium.

China has already been out over the weekend saying the bases for the proposed US tariffs are groundless and that it reserves the right to retaliate if they are imposed. “If the final decision impacts China’s interests, China will certainly take necessary measures to protect its own rights,” says Wang Hejun, chief of the trade remedy and investigation bureau at China’s Ministry of Commerce,

The main piece of economic news Friday was the preliminary University of Michigan Consumer Sentiment Index, which punched the lights out at 99.5 from 95.7 in January and is back close to its October 2017 record high of 100.7.  The jump is all the more remarkable given the survey was conducted in the teeth of the equity market gale two weeks ago, though perhaps not in so far as personal tax cuts took effect in January.  On another day, the data could have further elevated concerns about higher demand-pull inflation down the track and hurt both bond and equity market sentiment. That said, inflation expectations in the survey, closely watched by the Fed, were unchanged at both the 5-10 year and 1-year horizons at 2.5% and 2.7% respectively.

In FX, the US dollar staged a minor comeback for no obvious reason other than position squaring into the US holiday weekend, with EUR leading the move and JPY lagging but still managing to fully recoup the APAC session swoon to end marginally weaker on the day. Of some note on the Yen is that Friday’s weekly IMM positioning data shows that speculative short positioning actually increased last week in the face of a rapidly rising yen. We suspect the last numbers might not be painting a true picture.

EUR slippage came despite comments from the ECB’s Benoit Coeure, who signalled that officials are close to starting talks on altering their policy language as they prepare for the eventual end of bond purchases. “Our communication on monetary policy will change” Coeure told reporters on Friday in Skopje, Macedonia. “Certainly the expectation is that this will be discussed in early 2018.” Evidently,  a lot is already now discounted regarding the ECB’s ‘exit strategy’ A Reuters poll late last week shows virtual unanimity amongst economists that QE will end no later than end-2018, with the ‘median’ estimate for when rates first start to rise being six months after QE buying ends.

GBP was spared an immediate fall on weaker than expected retail sales data (0.1%) by headlines trumpeting ‘EU’s Barnier: We’re on the way to an orderly UK withdrawal’. Yet reading the full text of Barnier’s speech (and viewing his neat ‘Stairway to Brexit’ schematic) there’s nothing here to justify a Sterling-positive take.  Sterling ended mid-pack, down about half a percent on the day, as too did AUD, dropping briefly back below 0.79 from an earlier high of 0.7988.

On the week the dollar is still about 1.5% lower in index terms, losses led by JPY strength followed by NOK on higher oil prices (but which failed to support CAD) and the seemingly irrepressible NZD (no sign of risk aversion there). AUD/USD ended the week just over 1% higher. The weekly change in commodity prices, though of course in part the mirror image of USD weakness, has been a supportive influence.

US Treasuries recoiled from Thursday’s push above 2.90% at 10 years, with curve re-flattening still in evidence on the day but much more so on the week (2/10s spread in by 9.3bps). 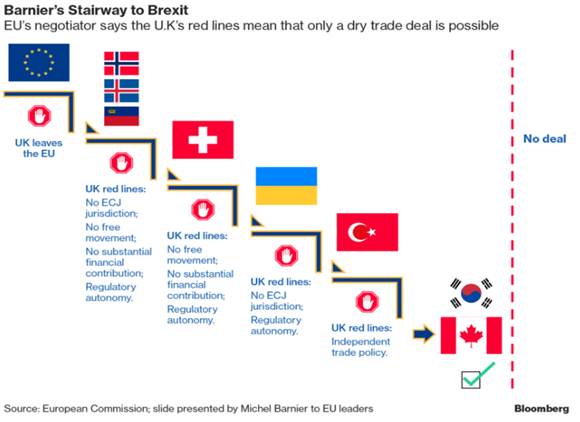 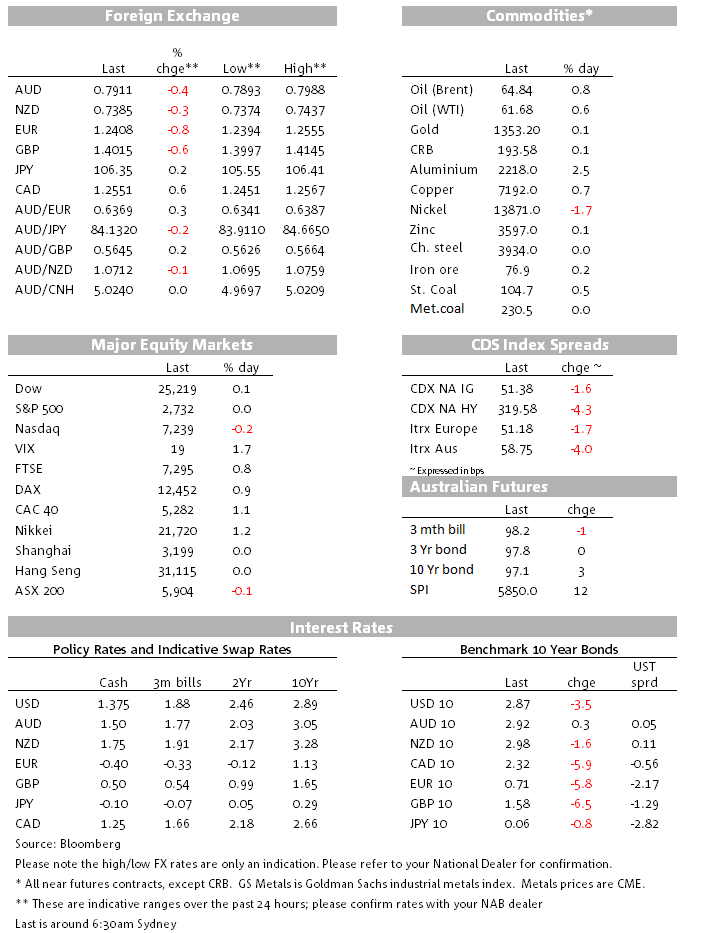