Markets Today: Risk-off mood on a raft of growth concerns

The risk off tone that started mid-way through our APAC session yesterday, amid a 3% drop in the Turkish Lira and stalling news on US-China trade talks, extended into the European session courtesy of underwhelming PMI’s in the continent and a soft CPI print in the UK. Meanwhile on the other side of the Atlantic, the Fed Minutes confirmed the FOMC bias to hike in June, however, members’ remains divided on whether there is a need for an acceleration on the pace of tightening. This lack of urgency triggered a rally in UST yields (led by the 5 year part of the curve), it helped US equities move back into positive territory before the close and it also saw the USD pair most of its early gains.

So, like Bob Dylan’s 1966 hit, Most Likely You Go Your Way (and I’ll Go Mine”), overnight news added further support to the view that US growth outperformance is likely to accelerate in Q2, the Fed remains on track to hike again while other major central banks hit the pause button and if trade tensions are delayed or derailed, the US still stand lose less than everyone else. All signs still point to USD outperformance.

The 3,5% gap lower in the Turkish Lira triggered a risk off tone during our APAC session with the move compounded by President Trump casting doubts on the upcoming US-NK summit. USD/JPY led the safe haven demand, dropping below the ¥110 mark and UST yields flirted with a move sub 3%.

Disappointing European PMI’s and softer than expected UK CPI didn’t help the cause. So, although there was a switch in the lead roles,  the risk off sentiment extended into the early part of the overnight session. The euro and GBP became the big losers while USD/JPY and 10y UST yields found some support.

The lack of a bounce in Europe’s PMI’s (Manufacturing PMI was 55.5 v 56.1e and Services PMI was 53.9 v 54.7e) triggered a sell-off in the Euro, with the pair initially gapping 50 pips to 1.1707, the move then extended over the course of the session, not helped by a move higher in Italian bond yields amid lingering political uncertainty. The market is still waiting for Italy’s President Mattarella to decide whether Conte, the little known PM-candidate has the “forza” to do the job. After a small reprieve on Tuesday night, the 10y BTPS-Bunds spread widened again overnight (+12bps to 188bps), the euro traded to a low of 1.1679, an now trades at 1.1697, after a small FOMC minutes boost.

GBP is another big underperformer (-0.62%), the pair currently trades at 1.3347, after dipping to an overnight low of 1.3306. UK CPI data came in a tick below expectations, retreating faster towards the BoE’s target, with headline inflation down to its lowest level in more than a year of 2.4%. Brexit woes also continue with reports the government is yet to decide on what post-EU customs option it wants. Both Boris Johnston and Jacob Rees-Mogg are pressuring to press ahead with leaving the customs union and for PM May to show more “backbone” in negotiations. A Brexit resolution remains elusive and with soft data not helping the BoE cause, downwards remains the path of least resistance for the pound.

Just before the European close and after dropping over 5% since this time yesterday, the Turkish lira did a massive turn around, following the Turkish Central Bank decision to increase its key policy rate by 300bps to 16.5% . The TRY now trades at 4.5761, 7% up from the intraday lows.

Ahead of the FOMC Minutes, the Turkish Lira move had a small positive effect on market sentiment which was further extended by the “short-term hawkish but medium-term dovish” take on the Minutes ( a Bloomberg description). The Fed Minutes confirmed the FOMC bias to hike in June, noting that “it would likely soon be appropriate for the committee to take another step” in raising rates, however the Minutes also noted that modest inflation overshoot “could be helpful” in anchoring inflation expectations around 2%. Members’ are also still split on the potential inflation risk coming from the tightening labour market and given the lack of evidence there is not yet the urgency to accelerate the current pace of tightening. This lack of urgency triggered a rally in UST yields with the moves led by the 5 year part, down 4.5bps to 2.82%.

After drifting down to an overnight low of 0.7523, the improvement in sentiment and move lower in UST yields has helped the AUD recover in last couple of hour with the pair now trading at 0.7563. Lack of domestic data releases suggest the aussie is likely to remain at the mercy of market risk sentiment. That said after dipping to a low of 0.7412, early in the month the pair remains on an upward trend and assuming no massive risk off event, the AUD probably still wins the beauty contest against many other currency, particularly against  GBP and EUR and possibly CAD, if NAFTA negotiations are kicked into the long grass as it currently seems. 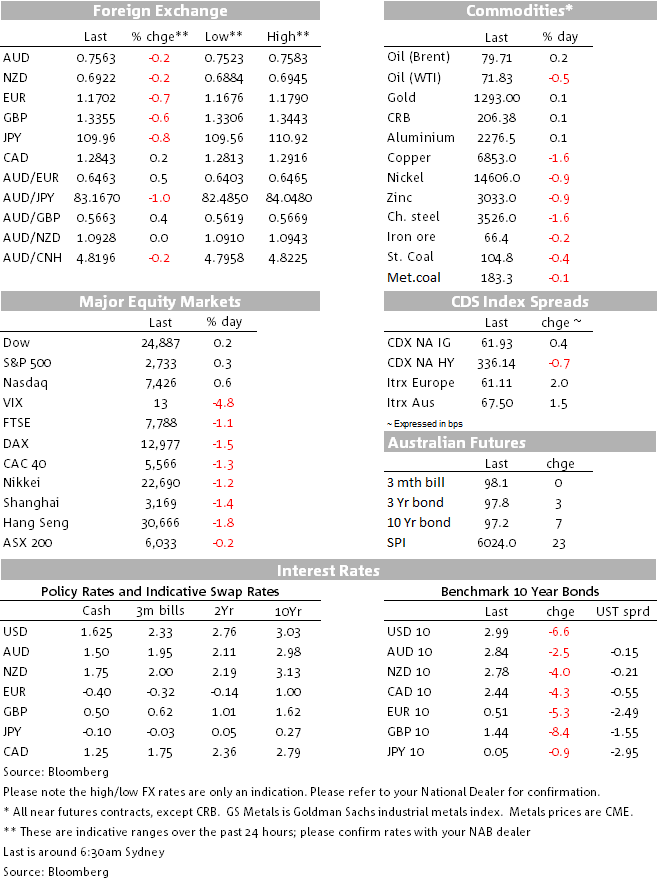