Markets Today: Soaring dollar as US leaves the pack behind

Suggestions the move reflects the US economy gaining momentum, whilst other economies are failing to keep pace.

It’s been almost a year since we’ve had cause to re-use one of David Bowie’s last ever recorded tracks; such has been the overall performance of the big dollar since early 2017 (i.e. mostly lower). It gets a re-run today partly since on my way in to work, I couldn’t come up with any catchy song titles featuring 200-day moving averages. The breaks below here have been a common feature of many of the big currency moves witnessed since mid-March. EUR/USD is the latest to push below its 200dma (just above 1.20) with the psychological 1.20 level now pierced.  Big figure levels have also been broken for AUD overnight at 0.75 and NZD at 0.70, taking these pairs down to their lowest levels since 6th June and 22nd December 2017 respectively. Adding to the current woes of the NZD overnight was an unexpected 1.1% fall in the GDT price index at the latest dairy auction.

Latest currency moves see the US dollar bid against all major currencies bar one – the Chilean Peso – which my colleague Rodrigo will doubtless be crowing about this morning (I’m not sure what that’s  about by the way, for one the copper price is down 1%). The narrow DXY index broke above its 200dma just after Sydney went home last night and the rest, as they say, is history, with a swift 0.5%+ gains following in the subsequent few hours.

The fracturing of the ‘synchronized global growth’ narrative in recent weeks and renewed divergent trends in interest rates between the US and the rest of the world as many non-US central banks are– as Jose Mourhino might say – ‘parking the bus with respect to moving forward with any steps toward policy normalisation any time soon.  This was again the message out of the RBA Board meeting yesterday afternoon and embellished by Governor Lowe in his pre-Board dinner speech in Adelaide last night, albeit he re-iterated than the RBA still expects the next move in rates to be up.

As we’ve also been stressing in out FX commentaries, stretched short US dollar positioning, vis a-vis the EUR, NZD and GBP in particular, looks to have had a hand in explaining the rapid reversals in the fortunes of these latter currencies, in which respect we noted at the weekend that latest CFTC/IMM data shows as yet scant evidence that long speculative positioning in these currencies has been significantly unwound, as of Tuesday last week at least.

To this we might also add – as a former colleague of mine has written overnight – that the recent run up in oil prices, to the extent it is very much a ’supply shock’ not ‘demand drive’ affair, on expectations President Trump will shortly pull the US out of the 2015 Iran nuclear deal, is something that the US, in the midst a dramatic fiscal expansion, will weather much better than the rest the (net oil importing) world.  It also promises to add to existing US inflation impulses, at the margin adding to the risks for three not two more Fed rate rises this year. Closer to home, my daughter was last night whinging about the latest jump in petrol prices, which I tried to explain was the result of the unusual phenomenon of sharply rising spot oil prices and a falling Australian dollar. She almost fell asleep at the wheel of course.

The main US economic news overnight was the ISM manufacturing index, which fell to a 9-month low of 57.3 and below expectations (58.5) while the prices paid gauge rose to a 7-year high. Activity levels nevertheless remained strong and the key take-out was that inflationary pressures were rising.  US Treasury yields are about 1bp higher across the curve (10s at 2.965%) suggesting that more of the inflation message was taken on board that the slightly weaker growth dynamic.

Canada has reported February GDP at 0.4%, better than the 0.3% expected and pushing year on year growth up to 3% from 2.7% in January. Bank of Canada Governor Stephen Poloz has just been  speaking and is certainly not sounding hawkish, expressing concern about transition in household debt dynamic (and hence the sensitivity to higher rates) and saying the forces in the economy suggest it is not yet time for policy to be at neutral. On NAFTA, he makes clear he wants to see how the economy perform after a satisfactory deal is struck – assuming one is of course – before acting again on rates. CAD has been the ‘least bad’ performing G10 currency overnight.

Leading the way down (again) in currencies overnight has been the British Pound, whose fall from grace has been quite spectacular in the last two weeks – a full 8 cents against the USD.  Weaker than expected manufacturing PMI data (53.9 from 54.9) has added insult to the injury caused by last week’s weaker than expected GDP data, as well as an increasingly messy political landscape with as yet no clarity on the UK’s Brexit negotiating positon (in particular whether discussions about Britain remaining in the EU Customs Union are definitely ruled in or out).

US equities have just finished a relatively quiet session with the S&P closing 0.25% higher.  Apple has reported its Q1 earnings after the close, not wildly different from expectations on key metrics (including shipments and average unit selling prices) but its plans for share buy-backs ($100bn) and enhanced dividends sees its share price currently up 4% in after-hours trade. 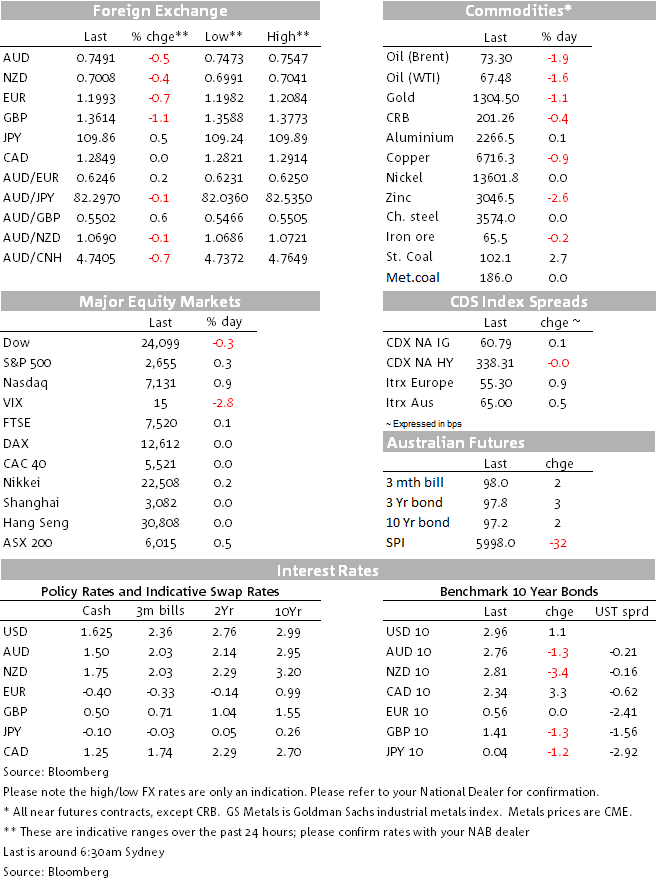