Markets Today: Take it or leave it

According to the Guardian’s European correspondent, ‘extensive mental waterboarding’ is how one official described the rough ride being given to Greek PM Alex Tsipras by EU President Donald Tusk, German chancellor Merkel and French President Françoise Hollande.

According to the Guardian’s European correspondent, ‘extensive mental waterboarding’ is how one official described the rough ride being given to Greek PM Alex Tsipras by EU President Donald Tusk, German chancellor Merkel and French President Françoise Hollande.  He says Tsipras was told Greece will either become an effective “ward” of the Eurozone, by agreeing to immediately implement swift reforms this week in order to qualify for additional aid, or leave the euro areas and watch its banks collapse.

This follows the leaking on Saturday of a German Finance Ministry position paper, in which Germany was to demand that Greece immediately transfer €50bn worth of assets to a trust fund, the sales of which would  be used to pay down debt, or Greece should take a minimum five year ‘time out from the euro.  Under his Grexit plan, Greece would remain in the EU and receive humanitarian aid (the so called ‘velvet divorce’).

There is currently a four page document being circulated but which does not appear to represent a common position among Greece’s European creditor, and with which Greece is said to have ‘problems’.  So expect discussions between Finance ministers and heads of state – which a French official has described as ‘extremely violent’ (and requiring German FinMin Schaeuble to be reigned in by Merkel) to continue well into the night.  Veteran BBC presenter Andrew Neil, who has followed Greece in huge detail, tweets that he has ‘no idea what is happening’.

What we can see is that the optimism with which markets were travelling into the weekend looks misplaced. This was after the institutions formerly known as the troika gave tentative thumbs up to the latest Greek proposal (authored with French assistance, apparently) tabled on Thursday.  At the same time, it looks to be a case of ‘twice bitten, three times shy’ in terms of willingness to sell risk and the euro, after the previous two Mondays (first following the Greece referendum announcement, and then the resounding ’no’) result, failed to produce meaningful sell offs.

Greece aside, a speech by Fed chair Yellen was Friday’s main draw. There were no overtones that could be described as in any way ‘hawkish’.  Yellen again went to great lengths to argue the case for the current unemployment rate not being fully representative of a labour market now close to full employment.

Yellen continues to think that the participation rate may yet turn higher as the quality and quantity of jobs on offer improve, bemoans the percentage of those in work as wanting to work longer hours as still quite high relative to pre-GFC norms, and a ‘quit rate that is still below those consistent with a fully employed economy. She did though admit to seeing some signs of higher wage inflation. The role of the stronger dollar in depressing (manufacturing) activity earlier in the year, and suppressing inflation, was played up, while in stressing uncertainty surrounding the US economic outlooks he noted that “the situation in Greece remains unresolved”.

Yet the fact Yellen confirmed both that her own outlook (for the economy and inflation) was broadly consistent with the central tendency of latest FOMC projections, and that based on her outlook ‘it will be appropriate at some point this year to take the first step to raise the federal funds rate’, elicited a sell off across the US rates curve. 2s ended the NY session +5.2bps on the day to 0.6370% and 10s +7.6bps to 2.3972%. Earlier 10yr Bunds had added 17bps to 0.898% on Greece deal optimism

Note The FT has an interview with Cleveland Fed President Loretta Mester just published, in which she says the economy is strong enough to sustain a rise in US rates, notwithstanding recent turbulence overseas.

Buoyed by optimism toward EU leaders agreeing a new deal for Greece at least in principle at the weekend, EUR/USD gains overpowered the uptick in US yields to see the DXY -0.6%. It has slipped this morning, but remains closer to 1.11.

Ongoing Greek machinations aside, the coming week’s skyline is also dominated by twin appearances from Fed chair Janet Yellen (Wednesday and Thursday) and China Q2 GDP and the usual monthly (June) economic indicators, due on Wednesday. 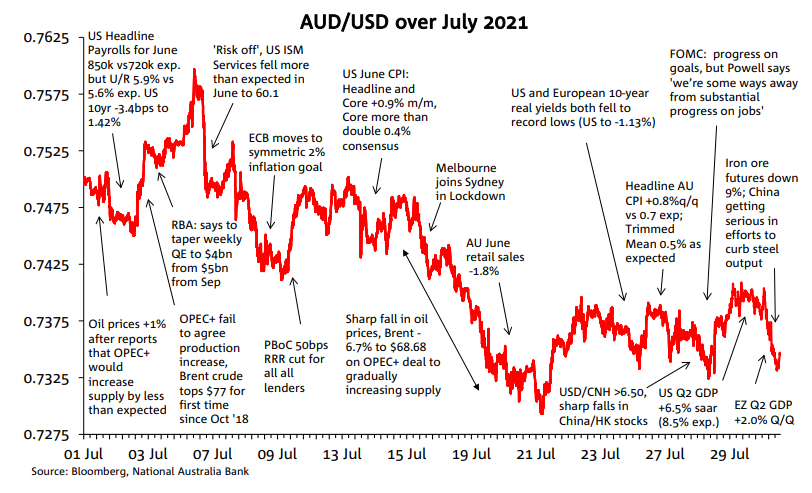