The market has turned its focus on what the ECB will say about the timetable for unwinding its QE program when they meet next week.

The prospects of an end to ECB easy money sparked a sell-off in EU bonds spreading across the Channel and into the US. The euro also got a boost lifting other European currencies along the way, meanwhile equities moved higher shrugging off the spike higher in yields. The AUD retained its post GDP gains, and barring the Brazilian Real, EM FX also outperformed the dollar.

The overnight story has been the ECB signalling that the end of QE is nigh. ECB chief economist Praet made it clear that next week’s policy meeting the governing council will  “assess whether progress so far has been sufficient to warrant a gradual unwinding of our net purchases.”. He then stressed that his personal view is that inflation is showing signs of convergence towards target, that there is underlying strength in the economy (he said recent weaker growth was mostly temporary) and that a tightening labour market is translating into wage growth and less slack. As if playing from the same sheet of music, Bundesbank Weidmann said that inflation was “now expected to gradually return to levels compatible with our target” and then ECB’s Hansson said that the Bank could hike faster than market pricing, before stating it’s “reasonable” to signal end of QE soon.

ECB comments sparked a sell-off in bond yields across the board with Italian BTPS leading the way (10y tenor +14bps to 2.90%). Not surprising given the ongoing Italian political /fiscal uncertainty as well as the fact that along with other EU peripheral sovereign bonds, Italy has enjoyed a lower borrowing rate thanks to the ECB bond purchasing programme. Core global bond yields also endured some ECB pain with 10y Bund climbing 9.6bps to 0.459%, 10y Gilts rose 9bps to 1.371% and 10y UST yields are currently trading at 2.97%, 4.4bps higher relative to levels this time yesterday.

In currencies the Euro led the gains against the USD overnight and after a small wobble, the AUD managed to retain yesterday’s post GDP gains. The Euro traded to an overnight high of 1.1796 and now it has settled at 1.1774. The initial rise in the euro weighed on the AUD, but with equity markets unfazed by the move higher in yield, the AUD recovered its poised along with other risk sensitive currencies. The Aussie now trades at 0.7667, 10pips below its overnight high ( up 0.66% over the past 24hrs). Meanwhile although the NZD also managed to eke some gains against the USD ( +0.17% @0.7733), the kiwi has lagged the AUD and the now the AUD/USD cross trades above the 1.09 mark for the first time since the 28th of May.

Our BNZ colleagues note that yesterday’s soft NZ building work data was another piece of evidence pointing to a soft Q1 GDP result, in contrast to Australia.  At this stage New Zealand’s Q1 GDP growth numbers looks set to print on the soft side, bout BNZ economists believe that economy’s growth should improve over the rest of the year.

Looking at EM currencies, it is interesting to note that the rise in global bond yields triggered a broad based sell-off in the USD consistent with the fact that UST have lagged the move higher on global bond yields. So far so good for risk assets, one exception however, has been the Brazilian Real which underperformed despite the fact that the central bank auctioned additional contracts in FX swaps aimed at supporting the currency. At this stage, EM concerns are seen as few bad apples, but Brazil is now certainly in the watch list along with the Turkey, Argentina, Venezuela and Indonesia.

In overnight economic news, the US trade deficit narrowed to a 7-month low as exports hit a record high, adding to the case for a strong Q2 GDP result. The Atlanta Fed’s GDPNow forecast sits at 4.5%.  Trump’s economic advisor Kudlow is trying to play down concerns about a trade war, suggesting that US trade tensions are just a “family quarrel”.

A rising union dispute at La Escondida copper mine in Chile continues to support the rise in copper. The red metal climbed 2.3% overnight and is up 6.6% over the past 5 days. Meanwhile oil prices had another wobble following a US government report showing a surprise increase in domestic crude stockpiles (WTI -0.89% @ 64.94). Overall, for the AUD, commodity prices remain buoyant and continue to suggest the AUD has room to trade higher. 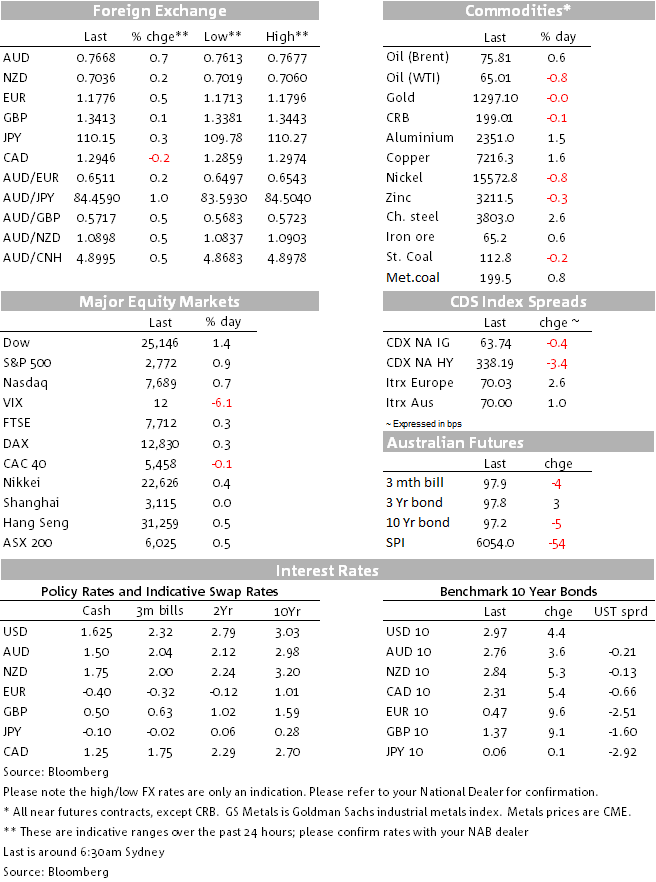