Yesterday President Trump pushed ahead with further tariffs on Chinese imports and the promise of retaliation soon followed.

Another round of tariffs

The AUD is the best performing G10 currency over the past 24 hours in the wake of President Trump announcing a tariff rate of 10% on an additional $200b of Chinese imports, to come into effect on September 24. That 10% rate is to rise to 25% from the start of next year, i.e. after the US mid-terms. Trump is also threatening that if there’s “retaliatory action against our farmers or other industries, we will immediately pursue phase three, which is tariffs on approximately $267 billion of additional imports”.  (You can find the President’s statement here and details of the tariffs here.)

China has responded by announcing additional tariffs at mixed rates of 5 and 10% on additional $60b of US imports.  Following up with more words overnight, Trump has tweeted that “…..China has been taking advantage of the United States on Trade for many years. They also know that I am the one that knows how to stop it. There will be great and fast economic retaliation against China if our farmers, ranchers and/or industrial workers are targeted!”  We note that among the exclusions from the tariffs were certain chemical inputs to textiles and agriculture, as nod to his farming political support.

Risk markets have not only taken these announcements in their stride, but it’s been a risk-on mood permeating markets with stocks, commodities, bond yields, and risk-sensitive currencies all performing.  While the AUD is playing to the risk-on mood in markets, it’s a little surprising that markets have taken the news in its stride.  All priced in?  Perhaps.  There’s also the realisation that the US economy has continued to perform despite what will likely be some uptick in inflation from the tariffs and signs that the Chinese authorities are taking steps to buttress their economy with more policy support.

For the AUD, we would also note that while not at record shorts, positioning in the AUD has been very short and the absence of more bad new news has likely contributed to its mini bounce.  NAB’s short term “fair value” model of the AUD/USD has also recently been around four cents above spot, another sign of the market having already priced in as deal of “negative” AUD news.

The AUD/USD sits at 0.7220 this morning, holding the ground it made through the APAC session yesterday.  The CAD has also been an out-performer over the past 24 hours, getting some tailwinds overnight from the further rise in oil prices, Brent crude up 1.04% to $78.85.

The NZD mini bounce yesterday after (misinterpreted?) comments from NZ PM Ardern in a radio interview that she was “pretty pleased” with the GDP figure had markets thinking (at least initially) whether this was an inadvertent heads up ahead of Thursday’s 2Q GDP.  This interpretation was later denied by her spokesperson.  Even so, markets this morning will be paying some attention to this morning’s trade and current account report for Q2 and what new light if any it sheds on tomorrow’s growth figures.

Rather than joining itself at the hip to the Aussie over the past 24 hours, the Kiwi has underperformed, AUD/NZD making its way into the mid 1.09s.  The latest Global Dairy Auction released overnight showed a fall of 1.3% with whole milk powder prices down 1.8%.  The report came and went without any noticeable Kiwi spill-over.  Also in the last hour, the NZ WMM Consumer Confidence measure for Q3 revealed showed a pull-back in confidence from 108.6 to 103.5 with no NZD fallout.

Both Asian and US equities have had good sessions since the tariff announcements.  The Shanghai rose 1.82%, while the US main board indexes have all closed higher.  US Consumer staples underperformed, but it was not from the likes of Costco and Walmart that saw their shares up 1.19% and 0.75% respectively, stocks at the cutting edge of consumer import price rises.

The LMEX base metals index rose 1.44% (all base metals rose), as did oil, while the bulks were mixed in Asia yesterday, iron ore and steel rebar higher, but steaming coal down in smalls.  With risk back on, US Treasuries were playing to script, the 10 year up solidly through 3% to 3.0551%, the curve steepening from little change in the 2y but 10s up 6.84bps.

It was a quiet night for scheduled data with only the US NAHB Housing index for September at a still high 67, housing activity set to get some boost from the Florence rebuild.  Even so, rising bond yields and mortgage rates are expected to restrain demand once such effects wash through.  Draghi has been speaking, but about European banking issues. 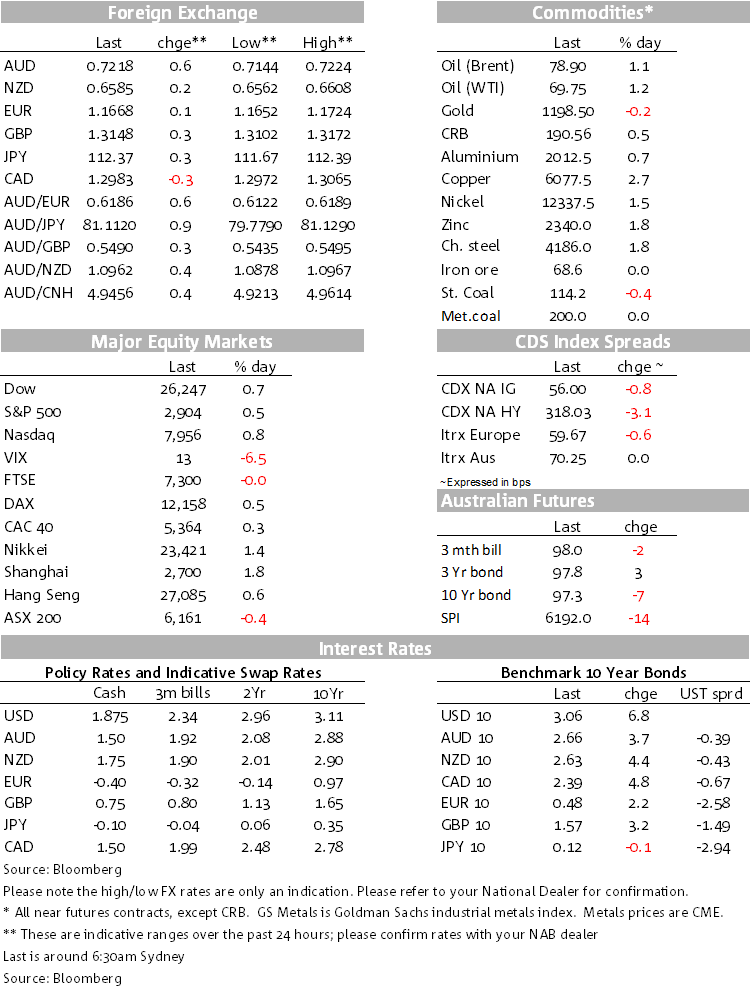 There’s a positive vibe about this morning, pushing equities higher and Treasury yields have seen a sharp rise too.