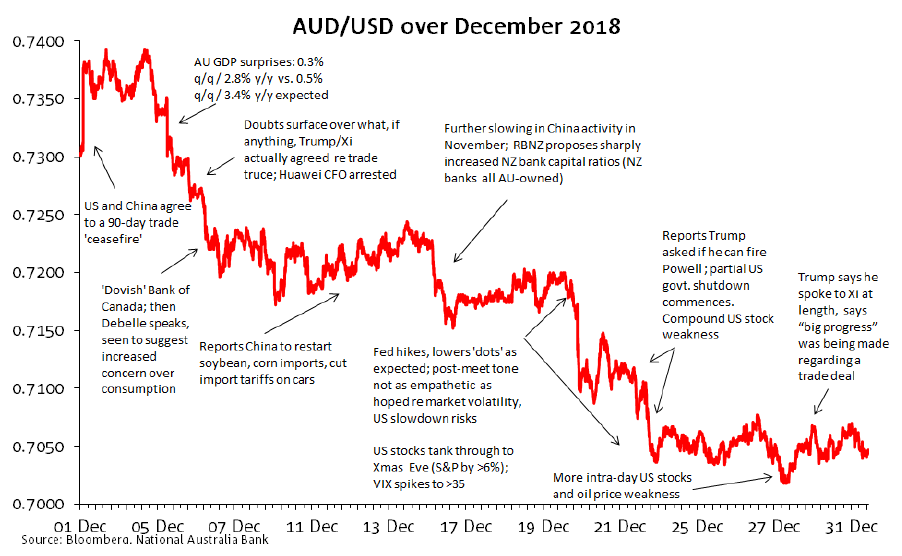 AUD weakness in December for the most part reflected a combination of weaker-than-expected local data (specifically, the 0.3% Q3 GDP print early in the month – prompting some thoughts the RBA could cut rates in 2019 – and the sharp sell-off in US equities and with that global stocks and associated rise in market risk aversion. The latter was encapsulated by the VIX (allied to the S&P 500) spiking from below 16 in early December to as high as 36 on Boxing Day.

The progressive rise in risk aversion during December came despite some positive overtures on Sino-US trade matters, after the Trump-Xi meeting in Buenos Aries at the start of December saw the US declaring a 90-day moratorium on any further trade action against China.  Agreements by China to re-start imports of some US agricultural products (soybeans, corn) and reports of an imminent lowering of Chinese tariffs on US auto imports, supported hopes trade tensions could be diffused in early 2019, hopes which culminated late in the month in President Trump claiming ‘big progress’ being made regarding a trade deal.

None of the positive noises on Sino-US trade could deflect attention from more evidence of slowing Chinese growth, highlighted by a sharp slowing in imports and exports in November and weak industrial production data.  This served to aggravate concerns about slowing global – and potentially US – growth.  Together with heightened concerns about disarray and chaos in the White House (e.g. from the resignation of Defence Secretary Jim Mattis and reports Trump was seeking advice on firing Fed Chair Powell, the latter after the Fed lifted rates on December 19th for the 4th time in 2018) these were key fundamental drivers of weak US stocks. Taken with ongoing falls in oil prices, this weighed heavily on the AUD for much of the month.

At the height of the stocks sell-off and peak in the VIX either side of Christmas Day, our AUD STFV estimate fell to as low as 0.67 before pulling up to 0.69 on Dec 31st). Compounding the decline in STFV were falls in oil and base metals prices. Some offset came from higher gold and a slightly narrowing in the negative AU-US rates differential,  as markets priced out further Fed tightening with more alacrity than it priced in the possibility of RBA rate cut(s) in 2019. Through the volatility in both actual and model values in December, spot remained (just) inside our preferred fair value range (+/- 3.2 cents).