The Chinese economy is liberalising and opening up to the rest of the world, paving the way for foreign investors to tap into opportunities in the increasingly wealthy nation, the 2018 ASFA Conference heard. 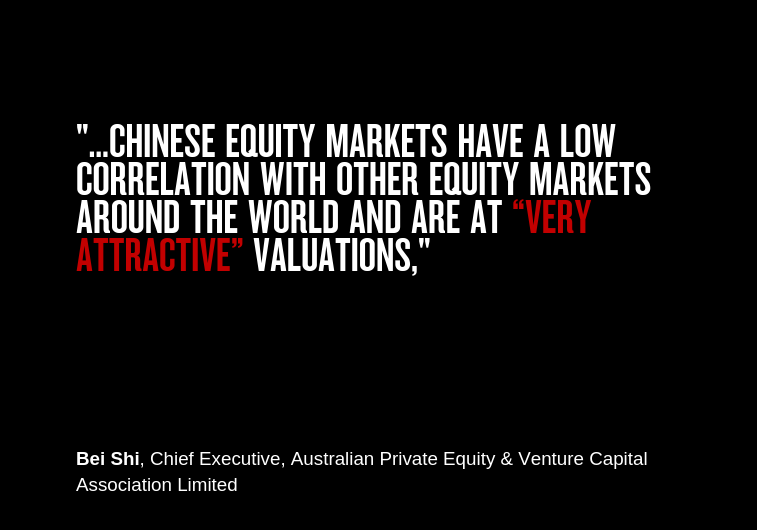 In a session on investment opportunities in Asia, presenters revealed how more foreign investment is flowing into China as access gets easier.

Per capital GDP has pushed past the US$10,000 hurdle and Chinese have disposable income to spend on services such as healthcare, education and travel, and on consumer goods, said Shi. The nation’s R&D expenditure is above the OECD average and continues to rise, it has global scale internet companies and is home to 36% of the newly added unicorns (start-ups with a valuation over $1 billion) in 2017.

Taken together, this means that Chinese equity markets have a low correlation with other equity markets around the world and are at “very attractive” valuations, Shi told the superannuation conference.

Their inclusion in these indices is a recognition in the large reduction in government intervention in markets over the past two or three years, Shi said.

“The Chinese economy will continue its momentum to liberalise, integrate and prosper,” she said.

But she warned: “Our capital markets are too big and too complex to understand, so local expertise is required to navigate and operate in it.”

“You want to look at  quality Chinese companies which are able to compete in and consolidate the sectors that they’re playing in.”

Established in 2014, the Shanghai FTZ Fund focusses on emerging industries, health, IT, logistics and real estate in the Shanghai free trade zone. Wu said the fund would like to work with foreign funds seeking to invest in China.

Like Shi, he said China was deepening its reforms and opening its economy up to the outside world. “We’re trying to build up the most business-friendly trading and investment environment to make foreign investors trust that China is opening the door to the rest of the world,” he said.

Head of Emerging Markets at the Australian Government’s Future Fund, Craig Thorburn said that when he thinks about Asia, he focuses on China, because it’s the centre of emerging markets and will soon also be the centre of capital markets.

The Australia Future Fund has about A$22 billion exposed to emerging markets, of which 40 per cent is allocated to China. Only A$150 million of that is exposed to domestic China A-Shares, but Thorburn plans to increase that. “The scope of the opportunity in A-Shares requires us to not only better understand it, but with an intent to actually increase that sliver of the pie chart materially over the next ten years,” he said.

The growing importance of venture capital

Another important sector for the Future Fund is private equity, with a $1.6 billion exposure to the sector in China. Within that, the area the fund is most excited about is Chinese venture capital.

The Future Fund’s first attempt to invest in Chinese venture capital wasn’t a success, so it’s now using a fund-to-fund relationship to get exposure to seven to 10 early stage, young venture capital firms.

“Cheque sizes are incredibly small, so people wonder why we’re doing it. We do it because we’re doing this for the long term, so we want a build out seven to ten relationships slowly, the Chinese way – getting to know them and them getting to know us,” Thorburn said. “In time, within the next seven to ten years, we’re hopeful those seven to ten relationships will become material. By material, I don’t mean cheque sizes of 20 to 50 million dollars each but something more like 300 to 500 million dollars each.”

Like the others presenters, Thorburn said the landscape for foreign investors is changing.

But that’s rapidly changing and by 2020 some 70% of the domestic market will be in the private sector, in healthcare, education, other services and technology.

Accessibility to Chinese markets for foreign investors is also improving, with initiatives such as China Stock Connect, which makes it easier for foreigners to buy local stocks.

As a result, said Thorburn, the Future Fund is learning as much as it can about China.