Business should recognise the powerful role it can play in ensuring Australia has the right infrastructure, in the right places; infrastructure that’s affordable, reliable and sustainable. 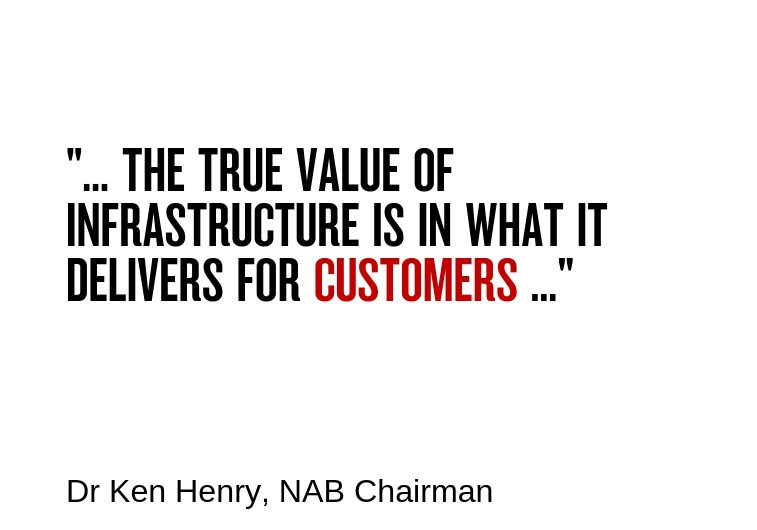 Public trust in the capacity of government and business to deliver infrastructure that suits community needs is poor.

NAB this year surveyed more than 1,000 Australians across the country about their experience of infrastructure. They told us the provision of infrastructure is failing to keep up with the pace of change, especially with the demands of a rapidly growing population. For example, people reported a significant deterioration, over the past five years, in the cost of utilities and the amount of traffic congestion.  And they see things getting much worse.

We shouldn’t be surprised.  For the most part, the delivery of infrastructure that’s in the best interests of the community, long-term, has been displaced by the short-term political interests of governments of the day.  Projects that should never have made the cut have been accorded top priority; others, with large expected social benefit, have been shelved.

It’s not just government that has room to improve when it comes to infrastructure.

The role of business in infrastructure

We business leaders must accept some responsibility for ensuring that strong population growth, and the investment opportunities accompanying it, lifts economic and social opportunity for all without damaging the quality of the environment passed onto future generations.

That means that we have to take an interest in traffic congestion, housing affordability, urban amenity and environmental amenity, including climate change mitigation and adaptation.

If we in business want better access to skilled domestic workers, then we’re going to have to offer those workers the prospect of better lives.

If we want modern and efficient infrastructure, then we’re going to have to take an interest in the design of our cities, in regional development and  in the planning of new urban centres.

We play a powerful role in determining what infrastructure is needed where because Australian businesses largely decide where people work and that’s the most important determinant of where people live.

NAB aren’t alone in recognising the role business and other non-government bodies can play in ensuring Australia meets community needs for infrastructure, through advocacy, thought leadership and the commercial decisions we make.

The Australian National Outlook (ANO) is a collaborative venture, led by the CSIRO and NAB, that includes more than 50 leaders from more than 20 business, community and other non‑government organisations, all committed to building a better future for Australia. The organisations represented in the ANO project include companies like Shell, LendLease and Australia Post; three universities; leading charities including The Red Cross; and other thought leaders like The Wentworth Group of Concerned Scientists and The Grattan Institute.

The ANO project draws on the CSIRO’s world-leading integrated modelling and assessment capabilities to model possible future outcomes for Australia to 2060.  The scenario work is designed to stimulate a national discussion about Australia’s future, and to encourage considered action from many, towards a more positive future.

There are many levers we can pull to foster innovation but infrastructure plays a big part.

Earlier this year the Australian Government called for submissions on the impediments to business investment in Australia.  Australia’s two largest innovation-focussed advanced manufacturing companies, Cochlear and CSL, made a joint submission which, among other things, highlights the importance of clusters of research and clinical facilities for innovation in the medical research and related technology sectors.  Such innovation hubs, or clusters, help to encourage the exchange of ideas, attract researchers and research funding and can act as an incubator for start-ups.

Cochlear and CSL point out that in considering new investments, such as the building of a new hospital, government and business should be cognisant of existing or emerging clusters and take advantage of co-location opportunities.

The role of customer stewardship

Customer stewardship is defined by the Better Infrastructure Initiative (BII) at the John Grill Centre, in their latest policy outlook paper, in the following terms:  “the collective management principles and practices that focus on long-term customer outcomes”.  It guides project sponsors, owners and operators, helping them to deliver services that translate effectively and dynamically over time into what’s needed and preferred by customers and their communities.

The paper notes that neither heavy-handed regulation nor government intervention can ensure the delivery of customer-led infrastructure.  Instead, what’s required is ownership with a disciplined and transparent approach and a strong focus on customer interaction to inform investment.

The required intensity of focus on the customer would be assisted by the development of a robust and independent assessment process; an assessment that lets owners and operators know where they fit in the infrastructure customer stewardship maturity journey.

Some recent excellent examples are worth calling out of the BII paper.   I was struck by the innovation demonstrated in the collaboration between SA Water and Adelaide Airport to reduce extreme high temperatures through the irrigation of open space at the airport. Extreme heat can impact airline productivity and their customers, something previously considered an ‘unfixable’ problem.  At Southern Cross station in Melbourne, PPP concession holder Civic Nexus has gone beyond their contractual obligation to ensure Melbourne, its citizens and investors in the station, achieve a better long-term outcome.  And Brisbane Airport is creating a gigabit precinct, where businesses can access ultra-fast internet connectivity to help drive productivity improvements across the city and the state.

Even those businesses that don’t have a direct link with infrastructure development can play a strong role in determining how and where it should be delivered, by advocating for the customers and the communities they serve.

Better decisions will be motivated by customer stewardship and we’ll all be the beneficiaries of a renewed focus on the customer.   While infrastructure projects create jobs and investment returns, the true value of infrastructure is in what it delivers for customers and, through them, the long-term social benefit provided to communities.

This is an edited version of Dr Henry’s keynote speech, ‘A greater nation: The role of business in the future of Australian infrastructure’, delivered at the Australian Infrastructure Dialogue in Sydney. Read more of the speech.