Self-storage is an industry in which storage space is rented to tenants. Self-storage operators provide rooms, lockers, containers, and/or outdoor space in which tenants store and access goods. Tenants are usually individuals (about 65%) or businesses (35%).

Operators lease a variety of unit sizes to customers. Depending on land size and catchment area, they may offer larger options (for boats and recreational vehicles) and specialised solutions (such as climate control for wine). However, for conventional operators, facilities range from 1,500 to 4,000 square metres of Net Lettable Area (NLA) with unit sizes varying between one and 20 square metres.

Given typical householder needs and the fact that smaller units usually achieve higher returns per square metre, the most popular units are six, nine and 12 square metres. Mature facilities generally operate at between 85%–95% occupancy. The optimum long-term average occupancy rate is 85% as demand is then considered firm enough to raise revenues and consider expansion. The following chart plots the ownership profile of key Australian self-storage operators. 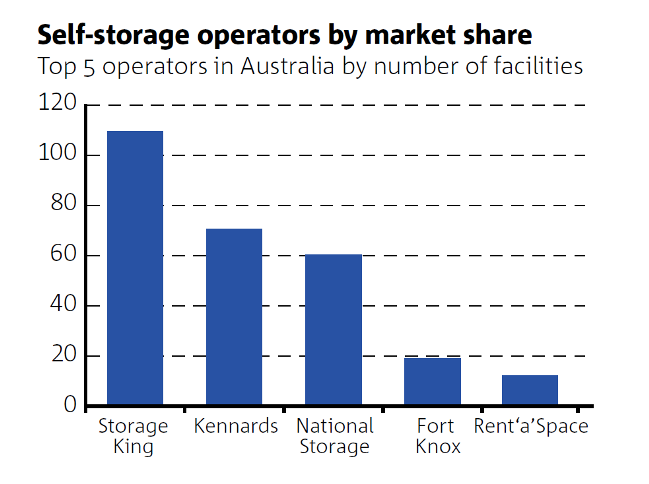 With just 19 and 12 centres respectively, operators Fort Knox and RentaSpace rank four and five respectively, highlighting the disaggregated profile of the sector. The largest Australian operators control less than 25% of the market and there are many smaller owner operators – given the simple business model and reasonably affordable facility costs (for example, $2 million to $6 million).

Units are typically rented on a month-to month basis with a minimum term of one month payable in advance. More than 80% of revenues are collected electronically via either credit or debit card.

Default rates are low. Where customers do default, they are locked out of their unit with items removed or sold depending on rent in arrears. Geographic and tenant base diversity gives operators protection from economic swings and the short-term nature of storage leases.

The principal barrier to entry for self-storage has been the balance sheet and liquidity required for a new operator to ‘trade up’ a new facility to normalised occupancy over a three to five-year period. There remains an undersupply of self-storage facilities due to:

The net result is that sector consolidation will continue and operators with a recognised brand, sound operating model and national portfolio are well placed.

Expenditure on private and public hospitals was the most significant expenditure item at $53.5 billion or 38.2% followed by primary healthcare services ($50.6 billion, or 36.1%). Barriers to entry are high, due mainly to government controls.

Large corporate-owned and franchised medical clinic operators will continue to grow market share. This will happen through economies of scale achieved in promotion, management, administrative services, government funding and in the purchase of consumables, training and insurance. The number of GP Medicare services is forecast to rise at an average annualised rate of 2.8% in the five years to 2016–17, resulting in a higher number of services per capita.

The healthcare property sector has not attracted significant institutional capital until recently. Some larger listed groups own hospital facilities, but most medical centres and smaller private facilities are privately owned.

Typical targets for investors include:

Healthcare assets are usually characterised by long leases and low vacancy rates (average 2%). The economy isn’t the driver for this sector in the way it is for the office, retail and industrial property sectors. It’s classified as a non-cyclical and defensive sector.

Governments oversee policy matters such as availability, quality and affordability of childcare, but services are mainly delivered through private providers. Ownership concentration is low and the market is competitive. Based on provider numbers, 75% of long day care centres have 10 or more other long day care centres within five kilometres.

Profit margins are usually low and will likely remain below 5%, as affordability for parents and competition constrain fees.

Recent regulatory changes have increased the industry benchmark for profitability to an occupancy rate of 80% (from 70%).

However, childcare markets may function less effectively than other markets. Parental choice may be limited due to fewer providers in a local area, extensive waiting lists in some areas and potentially high switching costs in changing providers (not just in money terms, but in resettling a child).

Most long day care providers don’t own childcare facilities but lease these from infrastructure investment funds, such as Folkestone Social Infrastructure Trust, or from local councils. Some providers do own their facilities, such as Only About Children, so these have the capacity to raise capital and manage development.

This article was first published in Private Word magazine (Autumn 2015).

Drawing upon the full range of expertise available across the entire NAB Group including JBWere and National Australia Trustees, as well as from select external partners, Private View provides insights to help high net worth individuals and their families bring their financial vision to life.

How to find income in a low-yield environment

Housing market sentiment bounced back in Q3, but still weak as VIC continues to weigh heavily.