It’s been a quiet 24 hours that has seen stocks lose some of their gains of last week.

The main feature of what has to be said are pretty soporific global financial markets at the start of the week and ahead of some key event risk on Wednesday has been a further jump in oil prices.  Brent crude has added another $0.75 to last week’s rise to trade at $71.09 and WTI crude is up $1.37 to $64.46, both to their highest since early November 2018. Fear of fresh supply outages from Libya are said to be responsible as ‘warlord’ Khalifa Haftar moves his self-styled Libyan National Army forces towards the capital Tripoli, base of the UN recognised government of PM Fayez al-Sarraj. Air strikes on Tripoli airport were reported overnight.

Oil prices have provided a further, albeit modest, boost to energy sector stocks, keeping the S&P500 just in the black at the close (+0.1%). It has also added another basis point to 10-year US break-even inflation rates, contributing to the 2.5bps rise in nominal 10 year Treasury yields, to 2.52%.

In currencies, no surprise that the CAD and NOK occupy the top two slots on the G10 scoreboards, up 0.75% and 0.55% respectively.  NOK’s outperformance has also bene helped by comments from Norges Bank Governor Olsen reiterating plans for a rate hike in the next half year. Norway is currently the only G10 central bank exhibiting any serious intent to lift rates this year (the Bank of Canada possibly another, but holding only what we could best be described as a weak tightening bias).

The US dollar is weaker in index  terns, DXY -0.36% to 97.04, which as is usual only really happens with a decent contribution from EUR/USD, up 0.4% to 1.1261 so pulling further up from the 1.12 area key support. Higher oil prices might have helped here given the typical negative correlation between oil prices and the dollar.  Also helping get the euro off to a firmer start to the European week was the Sentix Investor Confidence survey (that says how European investors are feeling about prospects for the Eurozone economy). This picked up to -0.3 in April from -2.2 in March. Still negative but less so and its best level since last November.

Options market related flows might – we stress might – have had a hand in subsequent EUR gains (linked to expiries Monday in the 1.1250-1.1260 area). Also Bloomberg ran a source report saying the ECB is in no rush to revamp its negative interest rate policy design (i.e. possible ‘tiering’ of its negative deposit rates to limit the negative side-effects on banks).  As such, it might be premature to suggest the ECB will further push out its guidance on how long it plans to keep its -0.4% Deposit Rate in place when it meets tomorrow.

‘Might’ is one of those weasel words often used to explain market moves that don’t have an underlying cause beyond the order-driven nature of markets, which is very much what we are in at the moment.  Credit for trying though, please.

AUD has lifted back more comfortably onto the 0.71 handle, up 0.3% to 0.7125, as part of the general lift to commodity linked currencies from oil and a generally softer USD.

Finally GBP is little moved, with no news of significant progress in the talks between the government and Labour party officials, in particular because of seeming intransigence on the part of the government to acquiesce to a key Labour demand that the U.K. participate in a Customs Union post brexit. This is a concession government officials involved in the talks know risks bringing multiple resignations from the ‘Brexiteer’ wing of the UK Cabinet in its immediate wake.  What are described as ‘technical talks’ are continuing this evening while PM May is heading back to the continent once again, to see Chancellor Merkel and President Macron ahead of Wednesday’s EU Summit.

Australia February Home Loans.  Home loans data have shown ongoing weakness in the housing market. While NAB and the market are expecting a small rise this month, the trend for home loan approvals has been downward for owner occupiers and investors. The weakness is most pronounced in NSW and Victoria, and in investor loans. 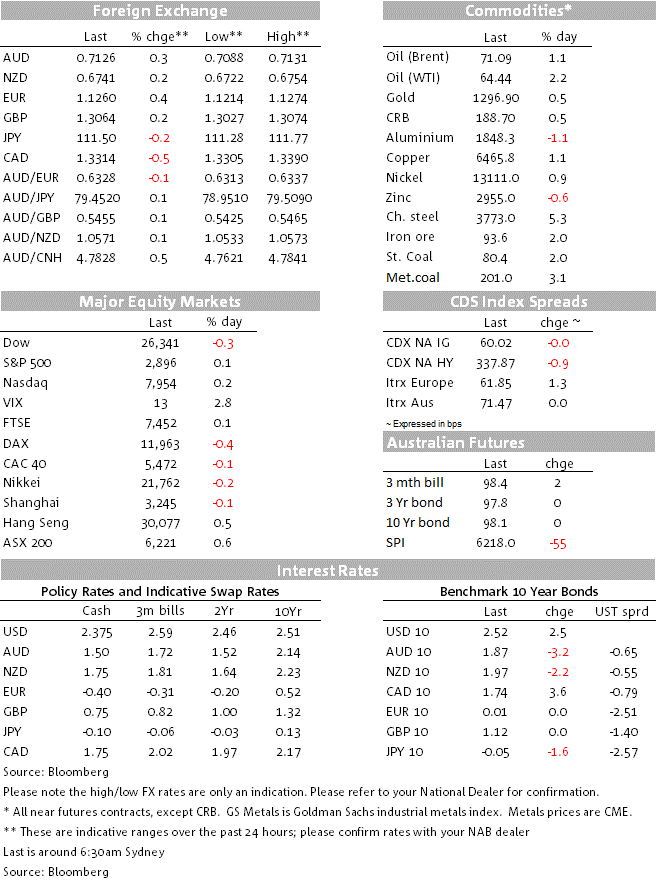