Markets Today: Back where we started from

Oil prices and US equities are back close to where they were at the start of the year.

Nobody said it was easy, No one ever said it would be this hard, Oh take me back  to the start – The Scientist Coldplay

The global equity rout continues with US equities now close to levels seen at the start of the year. Unlike yesterday, where tech shares led the decline, overnight falls have been broadly based although the energy sector is the big loser weighted down by an eye watering 6.5% decline in oil prices. Against this backdrop the USD has outperformed across the board with commodity linked currencies, excluding NZD, the big losers. UST yields once again are bystanders, little changed from yesterday’s levels.

Recent soft economic data and a US led equity rout in November have not played against the USD even though we have seen a pullback in Fed hiking expectations alongside a softening in Fed speakers messaging. The DXY index is up 0.66% to 96.87 and the broader BBDXY is +0.59%.

So for now, the big USD dollar has retained its safe haven attributes outperforming across the board in the overnight session. Brexit news are weighing on GBP and the euro while risk off sentiment and a softer commodity backdrop  have pulled down commodity linked currencies and EM FX.

Moves above 73c remain unsustainable for the AUD, early yesterday evening the pair briefly traded above the figure, but a combination of risk aversion in equities alongside a sharp drop in oil prices was never going to be a good combo for the AUD. That said, the initial decline in the aussie to its current level of 0.7216 (-1.02% compared to this time yesterday) can be attributed to RBA Governor Lowe comments overnight. Although the Governor gave a similar message comprised in the Board Minutes released  yesterday, the market latched onto a greater acknowledgement of concerns over housing (“watching the housing market closely”), credit conditions (“getting concerned about credit supply”) and the Governor’s remark that the recent fall in unemployment to 5% doesn’t foreshadow much of a rise in inflation. Lowe said “I suspect nationally we could sit around 4.5 percent (unemployment) without seeing wage growth pick up by too much.”. So putting it all together, ongoing risk aversion, softer commodities driven by oil and now a more cautious RBA suggest the AUD’s near term path of least resistance is likely to be down rather than up.

Against this backdrop is not surprising then to see other commodity linked currencies as the major underperformers from the overnight session. CAD is down 1% to 1.3307 and NOK is -1.34% to 9.5810.The kiwi on the other hand is a bit of an exception, only down 0.4% to

Brexit news have dragged GBP lower with pair now back below the 1.28 mark (-0.54%). Early in the overnight session, Spain’s PM Sanchez threatened to vote against the Brexit deal if there was no clarification on the status of Gibraltar , then the  DUP said it will withdraw support for the UK government, effectively going on strike, abstaining from voting any legislation in Parliament until an acceptable solution is found for the Irish border . This means PM May Means will be forced to change tack, or needs to find votes from somewhere else to pass the Brexit transition deal. Meanwhile, Jacob Rees-Mogg has warned fellow Tory MPs that if they don’t ditch Theresa May now she will lead them into the next election, scheduled for 2022.

The Euro has followed GBP lower and in fact it has underperformed the pound, dropping from a 1.1472 to 1.1370 currently. Italian budget concerns remain an issue with further widening in BTTP-Bunds spreads (more below)

President Trump said in a statement that the U.S. remained a steadfast partner of Saudi Arabia despite the killing of a dissident journalist last month. Some commentators have suggested Mr. Trump’s remarks could be an attempt to keep Saudi Arabia from cutting production at the December meeting among OPEC and non-OPEC members

Equity markets are deeply in the red again, continuing their trend retreat from September’s highs. The S&P500 is down around 1.6%, following similar sized losses in Europe. US equity declines have been led by energy shares (-3.18%), although IT, Financials and industrials  have also underperform the broad market with declines close to 2%.

US interest rates traded a narrow range. US 10 year Treasury yields dipped below 3.04% as oil prices fell, but  soon recovered some ground. Yields currently sit around 3.05%, down 1bp on the day, a limited move in the context of the ongoing hefty declines in oil prices. Meanwhile in Europe, 10y German Bunds fell another 2bps closing at 0.348% and 10y UK Gilts climbed 1bps to 1.381%. Bunds seemingly benefiting the most from the risk off mood from the overnight session while10y Italian BTTP rose 2bps to 3.612%, taking the BTTP Bunds spread to 326bps, the Italian budget remains a concern in Europe.

Bloomberg reports Trump’s legal team may submit written responses to Special Council Robert Mueller as early today capping off nearly a year of back and forth negotiations. Apparently Trump wrote a number of the responses himself and “it din’t take very long to do them…”

UK CBI industrial orders for Nov saw the headline bounce to +10 from -6 (it was last close to this high back in Jun). Forward-looking orders also rose to +8 from -3. Decent report. 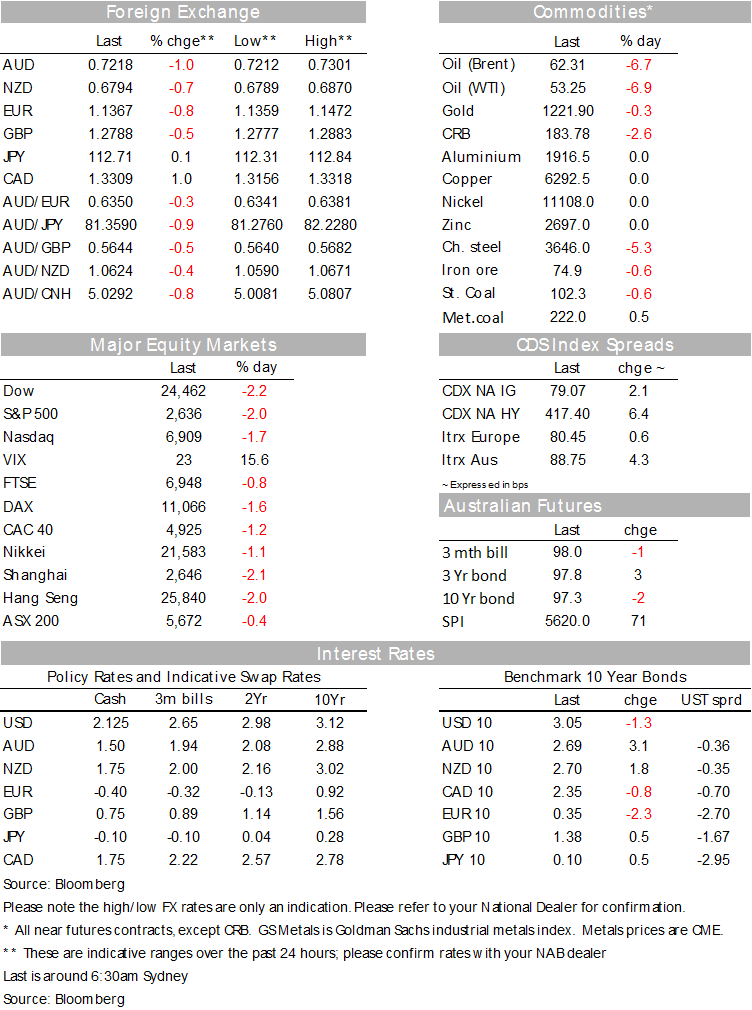