The Chinese stock market performed well on the back of yesterday’s proposals from the government and the PBoC. And there’s increasing questions over whether the UK PM should stand-down.

In FX, overnight moves, that see the NZD and the AUD as the 2nd and 3rd worse performing currencies on the night after the British pound, have for now killed of any thoughts that these currencies were in the early throws of a decent recovery, albeit driven by little more than short covering in light of the extreme short positioning evidenced by the likes of the net balance of speculative positions on the Chicago futures market. The inability of either AUD or NZD to key positively off yesterday’s sharp (4%+) rally in the Chinese stock market, on top of Friday’s 2.6% gain, is also telling, though the failure of the latter to spill over  into Emerging Markets more generally – to which AUD and NZD have been so highly correlated of late, may be part of the story here. In this respect, suspicion of the influence of ‘the big red hand’ or ‘team China’ in driving stock market gains at a time when further weakness would have elicited some significant ‘margin calls’ from a multitude of borrowers who have pledged shares as collateral, is something that can’t be dismissed out of hand

Broader US strength is obviously part of the reason why AUD and NZD are lower, but here and as we have been saying for a while now, it is not so much outright affection for the big dollar that is at play here but rather than fortunes of two of the major constituent parts, The Euro and Sterling.  The narrow DXY dollar index is up 0.3% since Friday’s New York close with EUR/USD -0.4% on the night and GBP/USD by twice that.

On Sterling, the rally last Friday sparked by reports that UK PM Theresa May was considering offering the EU ‘indefinite’ participation in the EU Customs Union (or ‘territory’ as she now refers to it  – not the same as a Union apparently – has given way to a view that the complete unacceptability of this proposal to the ‘Brexiteers’ within the Tory party has now increases the prospects of a leadership challenge (even if, as we have been saying ad nausea, the chances of May losing a leadership contest are very much smaller than the chances of the Conservative MPs garnering enough signatories for just such a challenge). Mrs May has been invited to attend a meeting of the so called ‘1992’ Committee tomorrow, and soon after that we might learn if a leadership challenge is indeed afoot.

As for the Euro, the big rally in Italian government bonds at yesterday’ European open, following new late Friday that Moody’s had shifted its outlook on Italy from negative to stable in conjunction with its one notch downgrade to the sovereign rating (to  one above junk) initially saw the Euro strengthen  (to 1.1550 versus the USD) but it now sits 70 points below this at 1.1470.  This after Italy made clear it is still intent on a 2019 Budget that implied a deficit of 2.4% of GDP, albeit the government has said this is a ‘ceiling’. The EU is evidently not impressed notwithstanding  Friday’s comments from EU Commissioner Pierre Moscovici that the EU would not meddle in Italy’s economic affairs and there now looks like being a three week period of toing and froing before we find out whether a compromise can be reached (chances are it will be).

For once the IT sector is supporting rather than weighing on broader US indices, ahead of what is the heaviest week of the US reporting season (146 of the S&P 500 companies report this week (of which there are ‘thousands in total, or so I heard Joe Kernon say on CNBC last night!) including several of the ‘FAANGS’, Instead, it’s financial and energy that have led the Dow and S&P lower, the latter as WTI crude languishes near a 5 year low, albeit it is not down on the day. Here, suggestions that Iran might flout sanctions on exports due to kick in on November 4th by selling to Russia who will then on-sell in its own name, and suggestions that Saudi Arabia may now be more not less inclined to pump more in an effort or re-ingratiate itself with key allies – the US in particular, might both be of some relevance.  The S&P has just closed down 0.44%, the Dow by 0.27% while the tech-heavy NASDAQ is up 0.27%.

US 10 year treasuries have seen yields meandering around Friday’s 3.19% New York close which is where they sit currently. 2-year yields are about 0.5bp up, at 2.91%.

WTI crude is flat while Brent is 34 cents or 0.4% higher versus Friday’s close. Industrial metals are mostly higher led by a 1.1% rise for Nickel. Iron ore is up 0.7% and coking coal $1 (so this grade is essentially still maintaining the big gains we saw in late September/early October). Gold is again struggling to go better after the big mid-month run-up, down $3.79 to $1,222.70

Locally we have RBA Deputy Governor Guy Debelle  speaking on a panel in Sydney from 15:30 AEDT, and before that Assistant Governor Bullock at on a panel at a different event at the same event at 14:00.  The title of this Sibos event is “enabling the digital economy’, so market related comments aren’t to be expected.

There’s precious little else on the calendar (EC consumer confidence, if you care) but plenty of earnings, including Boeing and Supermicro – the computer maker implicated in the recent ‘Big Hack’ Bloomberg expose . 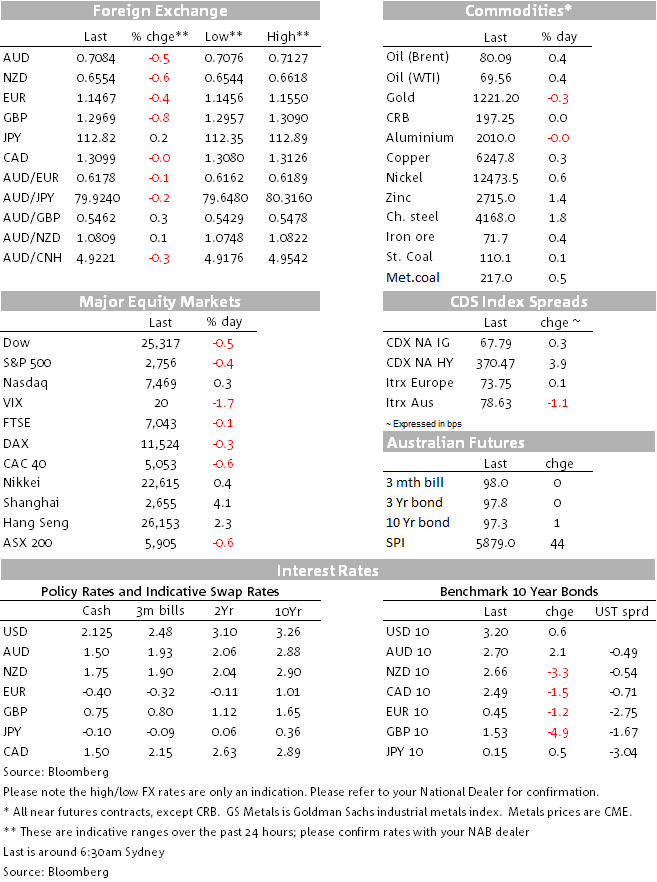