News of five of the US President’s associates being guilty of felonies continues to have little reaction on the markets.

Despite the US news wire coverage over the past 24 hours of the former Trump campaign manager Manafort’s conviction on eight counts of tax and bank fraud charges and former Trump Lawyer Cohen pleading guilty to illegal campaign finance charges and implicating Trump, the USD is unmoved.  There was more reaction immediately after the release of the Fed Minutes but that proved to be fleeting.  US stocks were mixed last night, the Dow and the S&P off smalls but the Nasdaq up 0.38%, the major tech FANG index up 0.8%.  The KBW Bank index was down 0.21% and US Home builder stocks dipped 0.58%, dipping a little further after the release of the July Existing Home Sales report revealing a little more incremental softness in US real estate activity.

We awake to Canberra news from last night that there may be another leadership challenge as early as today.  The AUD is pretty well unmoved, trading this morning at 0.7350, well within the range that we’ve seen since the start of the week with the USD having receded overall, the AUD one of the major FX beneficiaries.  There’s been more price action in the AUD/NZD rate over the past 24 hours, breaking through 1.10 after the release of stronger than expected NZ Retail volumes for the June quarter.  On momentum alone, the cross might have tested lower levels but for the positive AU Construction Work Done report for the June quarter, tilting the forecast growth risk for Q2 GDP higher.

Elsewhere in the over the past 24 hours, major FX currency moves have been very limited.  Bucking the trend has been the Mexican peso on reports (from Mexico) that US-Mexico NAFTA negotiations are nearing a conclusion.

The August 1 FOMC Minutes came and went without undue impact for the USD, nor for Treasuries.  The USD initially dipped as the first headline appeared calling out trade, housing and emerging markets downside risks, but the move was unwound as quickly as it appeared.  A read through of the Minutes further confirmed that the FOMC remains on track for a hike at the upcoming September 26 meeting.  “Many participants suggested that if incoming data continued to support their current economic outlook, it would likely soon be appropriate to take another step in removing policy accommodation.”

The US interest rate market continues to price in a high probability that the Fed will lift its target range another 25 bps at the September 26 meeting, though the outlook beyond then is looking less definitive. While trade, tariff and emerging market risks are there on the downside, the economy continues to run hot (the Atlanta Fed’s GDPNow for Q3 is currently 4.3% after 4.1% GDP in Q2) and the fiscal stimulus is still very supportive.

One further point to remain alert to is the characterisation of the stance of monetary policy.  Described to now rightly as accommodative, the Minutes drew attention to the likelihood that they will need to soon revise this description, the target rate (very likely at 2-2.25% by September) approaching the zone of the neutral rate, the neutral rate thought to be 2¾-3% by the FOMC, likely reached/breached next year.

The biggest move among commodities has been in oil with WTI and Brent both up 3%-plus overnight, reversing the pullback of the previous 24 hours, the overnight rally coming from a much larger than expected weekly drawing down of US crude inventories reported by the US EIA reported overnight.  Inventories almost depleted the large 6.805mb increase reported last week, down 5.836mb last week.

The annual Jackson Hole gathering of key global central bankers and other invitees (e.g. key academic economists) starts tonight with a welcome dinner, followed Friday morning with the conference getting underway in earnest with an opening address from the Fed Chair. Powell opens the conference Friday morning US time, speaking on “Monetary Policy in a Changing Economy”.  The theme of this year’s gathering is “Changing Market Structure and Implications for Monetary Policy”, seemingly covering medium to long term productivity, growth, digital disruption and low real wages and still subdued inflation even though the US economy has surpassed the level of full employment.

The market of course will be alert to any new clues or sound bites on growth, any update on the “rate hikes appropriate for now” comment (still pushing on gradually this year and next toward the presumed neutral rate?), and winding down the Fed’s balance sheet.  There are also the spill-overs to EMs from the strong dollar and rising US rates as well as the developing trade/tariff news and current US-China official discussions in Washington and growth- and inflation-supportive US fiscal policy .  (The full program of speakers won’t be released by the Kansas City Fed until later tonight US time, 6pm US MT.) 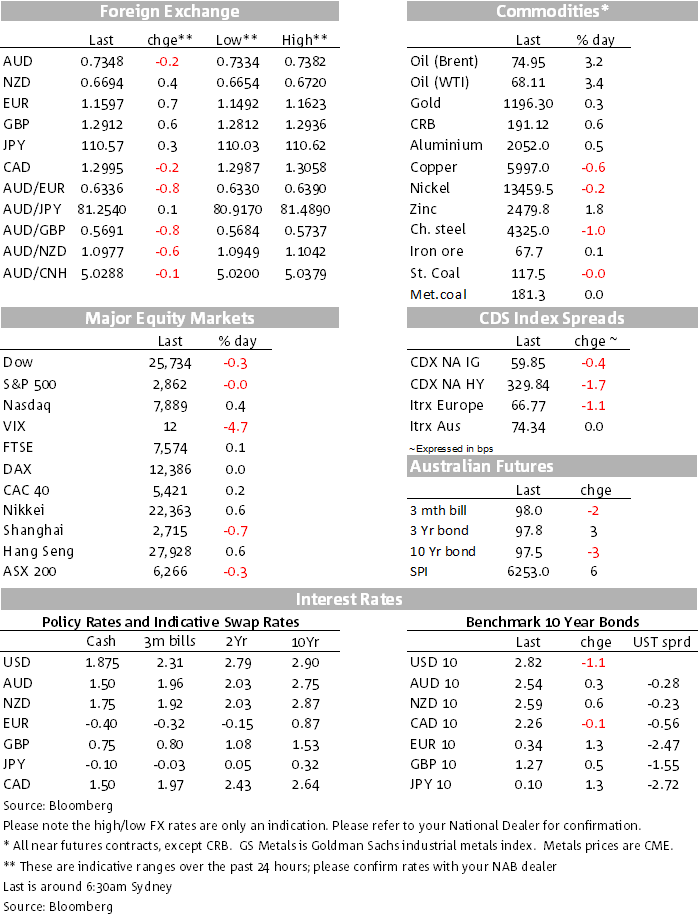