The pound has suffered the most of the major currencies.

On the back of much weaker than expected read throughs from Friday’s German and French Manufacturing PMIs (Germany’s manufacturing PMI deeper into sub-50 territory), the market was prepared for a soft reading from the German Ifo Survey for March.  But it was not to be.  The headline Business Climate index increased to 99.6 from 98.7 as did the Current Assessment index to 103.8 from 103.6, both signifying a touch more resilience from German business activity than not only the weak Manufacturing reading but a pull-back in the Services PMI to 54.9.

Under the surface of the headline Ifo Survey improvement was revealed a decline in the manufacturing component, but an improvement in services.

There was no US data of consequence to have spurred the bond market rally, though comments from Chicago Fed President Charles Evans seem to have been something of a spur. Speaking on a panel in Hong Kong yesterday, he said that if activity softens more than expected, or inflation/inflationary expectations run too low then policy may have to be left on hold, or perhaps even loosened. (Our emphasis.)  The tone however overnight from Philly Fed President Harker was less defensive about the outlook, mentioning his central forecast is for another hike this year and next (the median is for one hike overall, next year), even though he acknowledged that risks were very slightly tilted to the downside.

Fed funds futures are fully discounting a cut from the Fed by the end of this year (it’s 50% priced by September), with another in the curve for 2020.

The second tier Chicago Fed National Activity index for February was better than expected at -0.29, down from an upwardly revised -0.25 in January; the consensus was -0.38.  The Dallas Fed manufacturing Survey for March was 8.3, close to the 8.9 expected and less than last month’s 13.1.  Still growing but at a slower rate.

The AUD this morning is trading at just over 0.71, supported perhaps by the further leaning to Fed rate cuts, in a session that’s been risk neutral.  Gold was higher overnight (+0.73% to $US1328.30/oz), copper rose 0.44%, but iron ore was virtually unchanged despite the shutdown of major Australian iron ore ports since late last week as a precaution against approaching Cyclone Veronica.  There was a report yesterday that there was impact on rail lines, although details are sketchy.

Sterling has had a volatile night, up then down as the PM and the House of Commons ponder next steps with April 12 now seemingly as the next big date to get a deal done.  News out of Europe last week was that they would agree to an extension to April 12 providing the Commons could vote in favour of the May-negotiated deal.  May has said she won’t put up a deal without the likelihood of it getting passed.  Of course the Commons has not approved any deal and next steps are unclear.  The Letwin amendment surmises that various options will be presented this week or will Parliament take full control or some other political option?

Meanwhile, over 5.6m brits have already voted on line supporting “Revoke Article 50 and remain in the EU”.  It has become increasingly polarised publically and politically, markets understandably confused as to whether good sense will prevail. 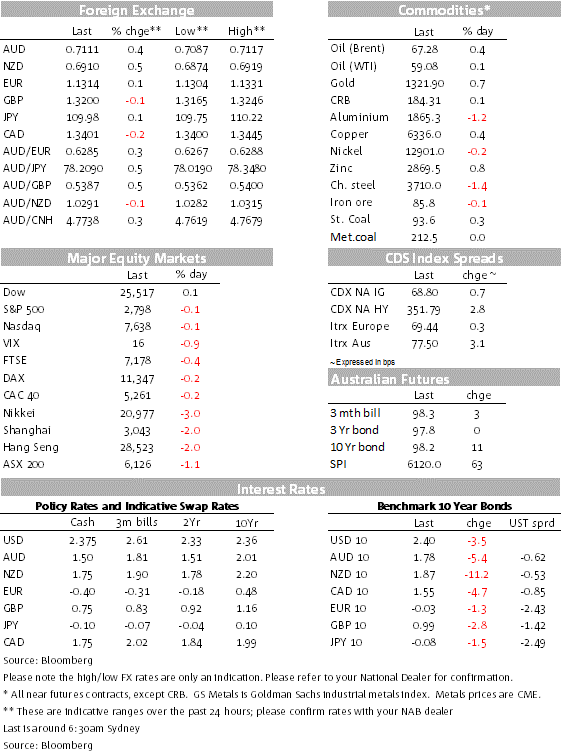