Markets Today: Goldilocks is on her own

On the face of it, the US looks like it’s enjoying a Goldilocks economy right now: there’s growth, employment is strong and inflation is low.

Overview: This must be the (Martin) place

Friday brought latest US employment data and the manufacturing ISM, both of which comfortably exceeded expectations in headline terms though with softer underbelly as far as inflation related sub-data was concerned.

Despite the latter, bond yields reversed a chunk of their post-FOMC falls and equities struggled to key positively off the data as a result, albeit the S&P and the Dow ended up slightly on the day.  Higher US yields failed to offer support to the US dollar, which ended Friday virtually unchanged in index terms and slightly lower on the week (DXY -0.2%).  The AUD was the best performing G10 currency last week, up 1% even after Friday’s 0.3% drop.

US Economic data saw the headline non-farm payrolls number print 304k, almost double the 165k street consensus, though December was revised down by a hefty 90k to 222k. the unemployment rate in contrast ticked up to 4% from 3.9%, though this looks to have been on a combination of a higher labour participation rate (63.2% from 63.1%) and the fact the unemployment rate is drawn from the Household Survey where some displaced government workers would have deemed themselves unemployed, while the Establishment Survey that determined the payrolls number will have classified all furloughed government workers as still employed.  The other key feature of the report saw Average Hourly Earnings rise by just 0.1% after a 0.4% December rise, to push annual growth in wages down to 3.2% from 3.3%.

Shortly after the payrolls report, the January Manufacturing ISM printed at 56.6, well up on the 54.0 consensus and 54.3 in December. The rise was driven by the strength in New Orders (58.2 from 51.3 albeit the separately reported export order index was down. But the Prices Paid sub-reading fell sharply, to 49.6 from 54.9. So together with the absence of any clear accelerating in earnings growth even if on a trend basis it is edging higher, it is the lack of inflation pressure than can justify the Fed’s new found ‘patient’ watchword.

Bond Markets showed a much bigger response than either equities or currencies to the payrolls and ISM reports, 10 year Treasuries finishing Friday 7bps higher and 2s up 5bps. This though still leaves 10s 9bps lower on the week and 2s down some 10bps, largely reflecting the impact of Wednesday’s dovish FOMC outcomes.

Stocks saw the Dow end +0.26% the S&P +0.1% and the NASDAQ -0.25%.   Within the S&P sub-sectors, the big movers were consumer discretionaries (-1.8% offset by a 1.8% rise in Energy, the latter aided by a near 3% rise in WTI crude (see below).  That stocks didn’t go better overall was clear testament to the role that revised Fed expectations – and in particular now the prospect of smaller than previously expected run-down of the Fed’s balance sheet, is having in supporting risk assets. As such, any further near term back-up in US yields would be expected to weigh on stocks.

FX had something of a mixed night Friday.  Most off the intra-day weakness in the AUD, which was ended as the second weakest G10 currency on the 24 hours through the NY close – came after the Caixin manufacturing PMI came in at a lowly 48.3 (done from 49.7%).  From there, it posted a very minor recovery in offshore trade to end around 0.7250. (-0.3%). AUD is nevertheless the strongest G10 currency on the week (+1%) closely followed but CAD, NOK (higher oil prices helping here and NZD.

Yesterday the Caixin service sector PMI printed 53.76 from 53.9, so not nearly as grim as the earlier manufacturing version, but the Composite read is nevertheless 50.9 down from 52.2, so no let up here as yet from China growth slowdown concerns.

The JPY fared worse on Friday consistent with higher US yields (-0.5%) while on the week it is GBP that has fared worse (-0.9%) thanks to the parliamentary votes earlier in the week and which have failed to eliminate the tail rise of a hard/’no-deal’ Brexit.  Over the weekend Nissan has announced it will not now build the X-Trail in Sunderland given Brexit uncertainty, news that might provide an additional drag later today.

Commodities continued to display some extreme volatility, iron ore and oil in particular. Iron ore added another 3% on Friday and is now some 35% up on its late November lows.  The rally predates the Brazilian mining disaster and so concerns about reduced seaborne shipments from Vale out of Brazil. To note is that the China steel PMI published last week rose to 51.5 from 45.6.

So China demand still looks healthy, though bear in mind that Tangshan, China’s largest steel making area, is scheduled to scale back production in April through September.  So some for the strength we are seeing in steel making commodities may well reflecting front-loaded production ahead of summer cutbacks.

On oil, the threat of new sanctions against Russia related to the detention of 24 Ukrainian sailors, with shipping in the firing line for sanctions, looks to have been an oil supportive factor Friday.

In general, it was as good week for commodities, a softer USD evidently helping, bar aluminium (-2%) but which didn’t prevent the LMEX index ending with a 1% gain.

External influences aside (but where China is out all week for LNY)  it’s a very big week for markets locally, with the RBA tomorrow followed by a speech from Governor Lowe on Wednesday and then the SoMP on Friday.

Key is going to be whether or not the RBA drops the phrase, last repeated in the December meeting minutes and then more recently in a WSJ interview with external Board member Ian Harper that “The next move in interest rates was more likely to be an increase than a decrease”.

If it stays (and this is only likely to be revealed by Dr.Lowe on Wednesday, not in tomorrow’s statement) it will – short term at least – be AUD supportive and likely negative for the money markets. If it goes, it will at a minimum underpin the near 50% probability of a late 2019 Cash Rate cut currently embodied in market pricing, and take a bit more of the recent heat out of the currency.

Also important in shaping rate expectations will be tomorrow’s Retail Sales numbers (where NAB looks for a fall of 0.3% against market consensus for flat). Today we get building approvals, where a small bounce back from the sharp (9.1%) November drop is expected (2.0%) but for what is a highly volatile series.

We should be getting US durable goods figures out of the US tonight as the official data release calendar kicks back into gear. 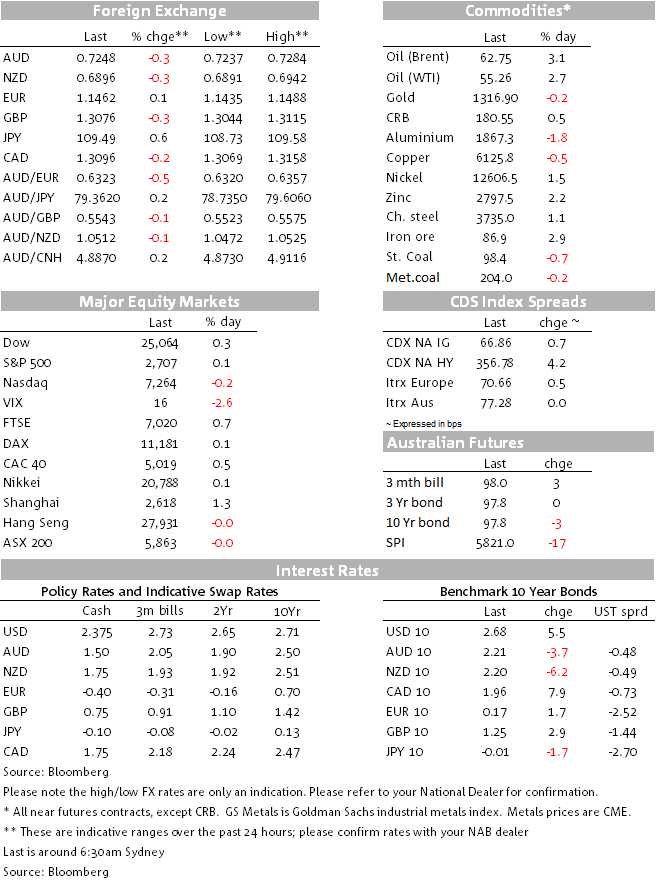 Calculating confidence intervals around cash rate futures pricing and the Reserve Bank’s economic forecasts, we estimated an average probability of QE through to mid-2021 of about one-third.

The rally in US equities continued at the end of the week, with the optimism spreading to Europe.