The Fed, ECB and the BoE seem a little more hawkish, indicating that, whatever is going on in the background, their economies seem to be faring well.

Overview: I’m waiting for the Man

European and US equities ignored the negative lead from Asia and posted decent gains for the day. The FOMC minutes revealed most within the Fed are concerned over the potential impact from trade policy, but remain comfortable for now with the gradual pace of tightening. Reaction to the Minutes triggers a flattening in the 2y10y UST curve,the USD is little changed while in G10 NOK and NZD have outperformed.

Technology shares have led the gains in the US with the NASDAQ closing 1.12% higher while in Europe car shares were the outperformers amid reports of an amicable meeting between the U.S. ambassador to Germany and German car representatives. So European and US equities are seemingly not bothered by the imminent announcement of US tariffs on Chinese goods. Overnight a US trade representative confirmed that 25% tariffs on $34bn of Chinese goods are scheduled to take effect at 12:01am in Washington (14:01pm Sydney time). So today’s US tariffs announcements and the expected equivalent retaliation from China looks to be in the price, but what happens next will be important for markets. We know a further $16bn tariffs will come shortly after, but any insinuation or confirmation of a second tariff list on $200bn worth of Chinese goods (Waiting for the Man? Or Trump Tweet?) will be the key for market sentiment and the AUD fortunes near term.

Early today the FOMC minutes didn’t really elicit a major markets reaction, barring a mild flattening in the 2y10y US Treasury curve which has now moved below the 30bps mark for the first time since early August 2007. The curve now trades at 28bps with the move led by a 2.8bps rise in the 2y tenor while the 10y rate is essentially unchanged at  2.83%.The FOMC minutes revealed most within the Fed are concerned over the potential impact from trade policy, but remain comfortable for now with the gradual pace of tightening. The Minutes noted that a “number” of officials said it might “soon be appropriate” to modify language in the Fed’s post-meeting statement language that describes rates as “accommodative”. On this score a number” of participants think wage growth will “pick up further” and “some” fear “heightened inflationary pressures” if the economy runs too hot for a prolonged period.”. So there are a signs that some participants are turning more hawkish but they do not represent a majority yet.

Looking at currencies the USD is a smidgen softer in index terms and in G10 the NOK is up 0.61%, despite the fact that oil prices are down 1%. NZD has been the other outperformer, up 0.38% over the past 24 hrs with most of the gains coming from a steady rise during the overnight session. The Kiwi now trades at 0.6785 and a move above 0.68 remains elusive for now.

Meanwhile the AUD has been a bystander, the pair has traded in a 42pips range over the past 24hrs and currently sits at 0.7387, almost exactly where it was this time yesterday.

Ahead of PM May’s cabinet meeting today, GBP has seen a bit of volatility overnight, initially gaining some support from hawkish remarks by BoE Governor Carney with the move quickly undone following a series of negative Brexit headlines. The Governor noted that “incoming data have given me greater confidence that the softness of UK activity in the first quarter was largely due to the weather, not the economic climate” and “an ongoing tightening of monetary policy over the next few years would be appropriate”. GBP climbed to an overnight high of 1.3274 on Carney’s remarks and pricing for an August rate hike moved to 80% from 75% the previous day.

Unfortunately for the pound, Brexit headlines eroded these gains after Bloomberg reported that Chancellor Merkel’s government is unconvinced by UK PM May’s latest attempt at a compromise arrangement for customs after Brexit, seeing it as unworkable.  Furthermore, UK Brexit Secretary Davis and trade secretary Fox have been reported as fighting May’s Brexit plan ahead of the cabinet meeting that kicks off tonight.  GBP now trades at 1.3220, after dipping to an overnight low of 1.3204 immediately after the Brexit headlines hit the screen.

Lastly in terms economic news Germany factory orders broke a 4-month losing streak (+2.6% vs 1.1 exp.), coming in much higher than expected in May, supporting the view that weaker euro-area growth earlier this year was a temporary speed bump.  In the US, the June Non-manufacturing ISM printed above consensus at 59.1 against expectations of 58.3 (58.6 previously), although the important employment component slipped and the ADP employment growth was slightly weaker than expected. 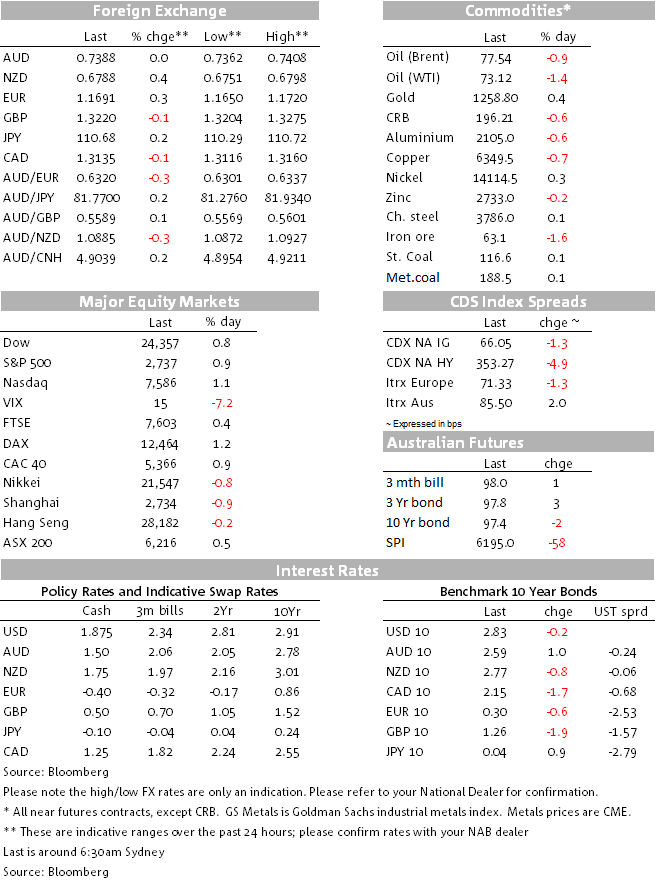