Markets Today: Is it all downhill from here?

Overnight saw a big sell-off of US and European stocks.

The army of professionals paid to fit facts to figures are out in force this morning ‘explaining’ the now 3-4% one-day falls in all the major US stocks indices on a combination of the recent back-up in US Treasury yields and deepening trade-related worries. Certainly these are both eminently plausible justifications, and indeed we have been at the vanguard of commentators viewing the recent Bloomberg expose of the alleged Chinese compromising of Supermicro’s computers as of wide ranging significance both in terms of understanding the likely breadth and severity of the Sino-US trade disputes and for the current travails of the IT sector.  The latter is leading the charge lower in the major US indices (e.g. the S&P 500 is now some 5% of its early month highs but the It sub-sector more than double this).

Yet for all that, the smaller-cap Russell 2000, representing companies that should not be particularly sensitive to either US bond yields or trade concerns, started falling well ahead of the US household name indices, and month-to-date is now off almost 10%. As such, and in the midst of still undeniably stellar US growth, a simple rush to book some profits may be the better explanation of this month’s sell-off and in which respect, it should be no surprise that the sectors that has led the charge higher this year in recent years, i.e. IT in general and FAANG stocks in particular, are showing some of the heaviest falls in the major indices.

Whatever is the correct explanation, the fact is that that the S&P-linked VIX ‘fear gauge’ is back above 20 for the first time since mid-April and a such we are seeing a little bit of a reconnect between the divergent paths of Developed versus Emerging risk markets that has characterised markets for much of this year.

If higher bonds yields are to any extent responsible for the equity sell-off, as theory would suggest is justified as the ‘risk-free’ rate used to discount future earnings streams ratchets higher, then the converse is not true today insofar as the equity sell-off had not – until the last hour at least – been accompanied by a fall back in bond yields. 10 year US Treasuries were sitting just above 3.20 (3.19% now) which is where they closed in New York on Tuesday. Then more Fed policy sensitive 2-year note is though now 3.7bps lower at 2.85%).  Earlier in the night, we saw Italian 10 year bond yields holding the recent break above 3.5% with the Italian government as yet showing no signs of backing down on its 2.4% budget deficit ambitions for the coming year.

In general, the bond market is not as yet giving a suggestion that the equity correction is of sufficient magnitude that it could cause the Fed to take a break from its current ‘quarter per quarter’ gradual tightening path. This looks wholly appropriate (and as one ‘think tank’ consultancy who came by to see us yesterday opined, if there is a ‘Powell put’ whereby the Fed will always step up to provide protection in the face of a falling stock market, the strike price is probably a long way below that on the ‘Yellen put’).  That said, President Trump may well soon be out again railing against the Fed and blaming them for weaker stocks, having resumed his criticism of the pace of rate hikes on Tuesday afternoon.

While not exactly a side show, it’s not been a particularly dramatic night for currencies with FX a lot more sedate than stocks. With the (inexplicable) exception of the NOK given the drop in oil the Japanese Yen is the best performing G10 currency, up around 0.5%, while the risk and commodity price sensitive AUD, NZD and CAD occupy the bottom there slots on the G10 scoreboard (with CAD, -0.75%, faring worse than either AUD (-0.4% to 0.7074) and NZD (-0.23% to 0.6458).  Sterling continues to be sucked higher amid ongoing optimism driven by comment from both EU officials and source stories in the UK press that a Brexit Withdrawal agreement is close to being agreed (80-90% if you believe the reports).  At 0.5363, AUD/GBP has just traded to its levels since June 22nd 2016, the day before the Brexit referendum result.

As for AUD, while it’s tempting to extrapolate this jump in the VIX (now to above 22 as I wrote) as implying downside risk to AUD/USD, we have been at pains to point out in recent months that it is the disconnect between risk sentiment as represented by the VIX (i.e. still strong) and elsewhere (i.e. in Emerging Markets) that ‘explains’ the widening gulf between our short term fair value estimate (consistently in the 0.74-0.75 area) and the actual performance of the AUD – much closer to 0.70.  If the VIX keeps rising, this may simply mean that our fair value estimate falls back closer to spot, rather than suggesting further sharp falls in AUD are imminent.

With the exception of gold (+$4) commodities are in a sea of red, led by falls of over $2 in both WTI and Brent crudes. The latter is somewhat ironic insofar as Hurricane Michael, the strongest to make landfall in the United States since 2004 (i.e. pre-Katrina) has seen precautionary shut-down in a large section of Gulf of Mexico production even though not in the direct line of Michael’s fire.  This would seem to attest to just how much of a speculative element there has been to the recent run-up in oil, albeit seemingly with good justification in front of the re-imposition of US sanctions on Iranian oil exports.

Exchange traded industrial metals are all lower, led by a 0.8% fall for copper, but note that neither iron ore or coking coal have succumbed to commodity prices pressures elsewhere (iron ore is flat, coking coal slightly higher).

All eyes on APAC stocks today.   US CPI is the main economic draw tonight.  Our model for core CPI is suggestive of an on consensus 0.2% m/m print for September. However, we view the risks to the upside given the possibility of a rebound in Apparel Prices after last month’s steep -1.6% m/m fall. The fall in Apparel Prices almost accounted for half of the below consensus August CPI outcome, subtracting some 0.05%points off the monthly figure). Some reversal of the Apparel Price fall could accordingly add up to 0.05% points to our 0.2% model estimate and we cannot rule out the possibility this rounds up to 0.3%. Overall though we still expect y/y Core to be at the 2.3% consensus

Locally, RBA Assistant Governor (Economic) Luci Ellis speaks at the 2018 Economic and Social Outlook Conference in Melbourne (09:30 AEDT). Before that (08:30) the NZ Sep Food Price Index will settle our BNZ colleagues’ judgement on the strength of the Q3 CPI, notably compared to RBNZ expectations 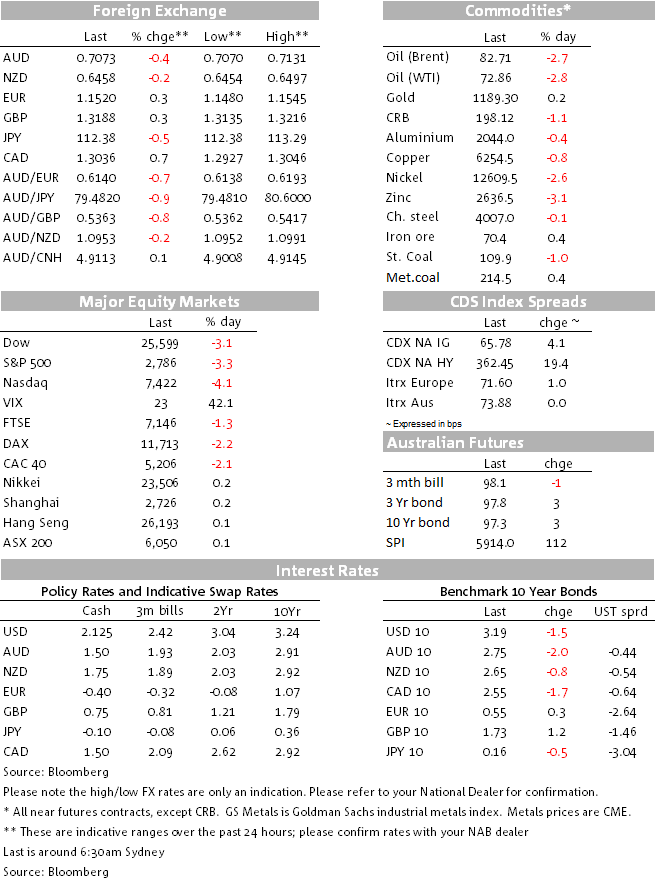