The New Zealand dollar has taken a hit. Meanwhile markets remain confused and concerned about the continuing trade tensions.

While emerging equity markets and currencies remain under pressure amid further CNY depreciation and buoyant oil prices, US equities have shrugged off the negative lead from Asia and Europe with gains in the IT sector providing a Bridge over Trouble Waters. After a soft start, the USD is little changed, UST yields are higher with the selloff led by the 5 year part of the curve and in G10, CAD is the outperformer amid buoyant oil prices while NZD has remained under pressure as market entertains a small chance of a near-term RBNZ rate cut.

After a USD/CNY fix just shy of 6.60 at 6.5960 and below market expectations for a fix just above the figure, USD/CNY continued its recent ascendency closing the overnight session at 6.6270, up another 0.3% on the day and +3.7% since mid-June. Meanwhile Chinese equities led the declines in Asia with the Shanghai Composite index down for a fourth consecutive day (-0.93% yesterday and -3.6% cumulatively).

The meltdown in CNY and Chinese equities is keeping EM markets under pressure with the rise in oil prices not helping the cause either. IDR fell 1.47% overnight and the argentine peso dropped 2.33%.The negative lead from Asia infected sentiment in Europe, but later on gains in the US IT equity sector lifted the mood and help US equities end the day in positive territory.

So on the one hand lack of PBoC intervention is keeping market weary of a CNY led equity meltdown with EM markets under pressure while buoyancy in US shares suggest there are no major signs of contagion in developed markets yet. The rise in US stocks has helped UST yields edge a little bit higher overnight (10y +1.3bos to 2.836% while 5y +2.2bps to 2.718%), again suggesting no major risk aversion in the US. However back in September 2015, the sharp 3.8% CNY decline triggered a wide sell off in risk assets and a spike in the VIX index above the 40 mark. We think USD/CNY and Chinese equities deserve close attention at the moment, further declines will undoubtedly increase the risk of contagion.

Moving on to currencies, after a soft start to the overnight session, the USD has regained its mojo helped along by the performance in US equities and move higher in UST yields. DXY now trades at 95.28, essentially unchanged while BBDXY is -0.3% after been down over 45% at one point. CAD has been the strongest of the majors (+0.7% and now at 1.3254), supported by higher oil prices (WTI hitting a fresh high of $74) and the OIS market prices in a greater chance of a BoC rate hike next month (75%), following yesterday’s comments by BoC Governor Poloz, who reaffirmed the Bank’s tightening bias.

Meanwhile on the other end of the spectrum NZD has been the G10 underperformer down 0.47%. The NZD has pushed lower overnight to a fresh 2-year low of 0.6746 and currently sits 10 pips above that level.  Yesterday the  market interpreted the RBNZ as slightly more dovish than the May MPS, with a deliberate change in wording in the first paragraph.  The Bank commented that that the OCR will remain at 1.75% “for now”, previously “for some time”.  The market saw this as the Bank becoming more open to the idea that the OCR might need to be cut, should the recent trend of bad news continues.

AUD on the other had has been a bystander over the past 24hrs, range trading in a 30 pips range and at 0.7351 the currency is pretty much at the same level it was this time yesterday. That said, we remain wary of a sizeable move lower  on the Aussie and other risk sensitive currencies amid the ongoing turbulence in EM markets and uncertainty over the next US trade move. In theory, US trade tariffs on China should start on July 6th and an immediate retaliation from China is expected. If so and unless something changes between now and then, stronger sanction from the US should be expected.

In other news, EU leaders have gathered in Brussels for their latest summit. EC President Juncker said that the EU is working on preparations for a no-deal Brexit in parallel with an ordinary and proper withdrawal agreement.  He expressed frustration at the lack of progress, laying the blame at the UK government which has yet to agree on its future relationship with the EU.Given the lack of a UK consensus, no progress on a deal is expected to be made at the summit. EUR is little changed at 1.1569, after trading to an overnight low of 1.1529, the 1.15 level remains a key support for the currency.

The BoE’s Haldane, who dissented and voted for a rate hike at the last meeting, outlined his case for tighter policy. He saw the economy at full employment and developments that will add to cost and inflationary pressures, indicating that a rate increase now would “lower the risk of needing to tighten policy less gradually in future and cause a sharper adjustment in the economy.”. GBP is weaker, falling to a fresh low of 1.3050 overnight and now trades at 1.3078.

The Fed’s Bullard is usually ignored as he is an uber-dove but his comments to reporters after a speech were interesting.  In talking about the escalating trade tensions he commented that “I would say I’m hearing full-throated angst…all aspects of the economy are affected, but agriculture is certainly being hit”.  He also noted that some suppliers were using the threat of new tariffs as a reason to raise prices, even when new tariffs would not directly target their business. 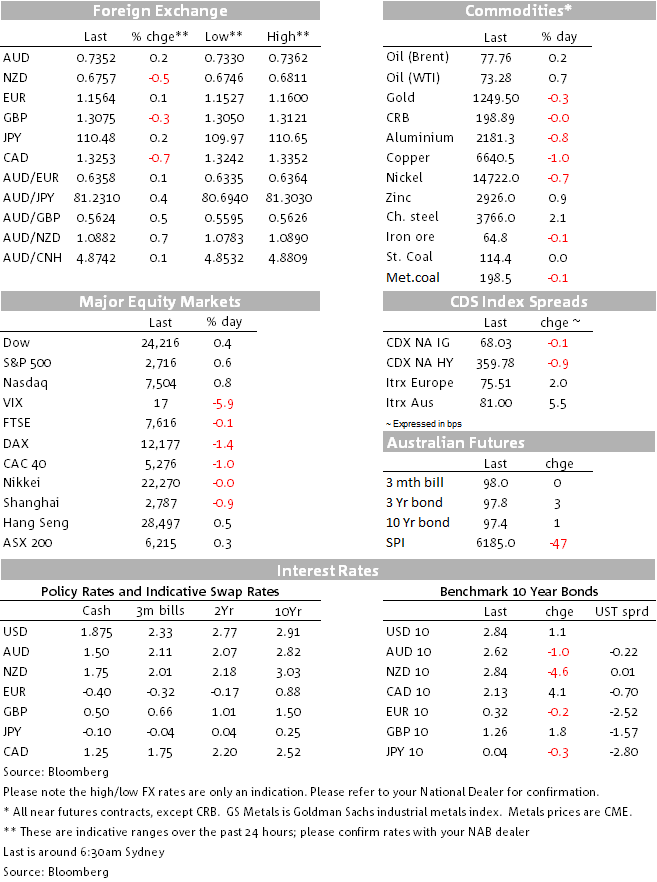 Markets Today: US & Europe - two sides of the same coin