The Italian budget wasn’t as easy to resolve as the markets had hoped.

Post the FOMC yesterday, markets were steady until late afternoon headlines hit the screen suggesting the Italian government was in a quarrel with the two deputy PMs pushing for an increase in the deficit. The news triggered a sharp drop in the Euro which accelerated after stops were triggered. The jump in Euro and JPY cross currency bases with the 3 month tenor rate covering the end of 2018 also help the USD bid while higher German inflation and mixed US data releases where largely ignored. This morning  Italy’s coalition government agreed to a 2.4% budget deficit (above the 1.6% expected) and consequently the euro remains under pressure. Broad USD strength has seen the AUD and NZD drift lower overnight. UST yields are steady and main European and US equity indices have closed marginally higher.

News that the release of the Italian draft budget for 2019 had been postponed due to “a difference of opinion” between the two Italian deputy PMs and Finance Minister Tria,  with the former looking to increase the government expenditure plan,  triggered a selloff in the euro with the pair dropping 50 pips in the matter of minutes from 1.1751 to 1.170. The markets ignored the strong German CPI print (2.2% vs 1.9% exp. yoy) which points  to upside risk the September Eurozone CPI print tonight (more below).

The decline the Euro has accelerated this morning following confirmation that Italy’s coalition government has agreed on a 2019 deficit at 2.4 % of GDP during a late night cabinet meeting in Rome. Euro now trades at 1.1642.

In addition to euro weakness, the bid in the USD has also been supported by a jump in EUR and JPY cross currency bases, reporting and regulatory compliance creates a desire/need for many institutions to hoard cash ahead of year end and with the 3 month tenor rate covering the end of 2018, the cost of borrowing USDs in the cross currency market has gone up. The Euro three-month cross-currency basis dropped to minus 40bps overnight, from about minus 16 points on Wednesday, the biggest single-day decline since the 2009 GFC.

Meanwhile a raft of mixed US data releases (see details below) were largely ignored. Of note the large August trade deficit means that many will be looking to trim their Q3 GDP growth expectations by up 1%, although the jump in inventories also revealed overnight  is an offsetting force. That said one important take away was the large increase in imports (reflecting the domestic economy inability to cope with domestic demand) while the anaemic export growth was also a disappointment.

AUD moves remain largely driven by external forces. Yesterday the pair came under pressure after a softer than expected China industrial profits print  (9.2% y/y in Aug down from 16.2% in July ) and later on the rise in the USD amid European woes, gave the Aussie another push lower. The pair now trades -0.62% lower at 0.7208 and its inability to make a sustain break above 0.73 is likely to embolden AUD bears.

In contrast the overnight rise in USD has seen USD/JPY make a decisive break above ¥113, the pair now trades at ¥113.38 and its upward trend established early in September remains firmly in place.

Against a backdrop of a strong USD, the NZD is down to 0.6617 (-0.69) and there was little market reaction to the RBNZ’s OCR Review, which came as no surprise.  No change in the OCR and the statement showed little change in guidance about the policy outlook.  Notably and despite better data prints of late, the market still seems happy to price in a chance of easier monetary policy over the year ahead, with a close to 30% chance of a 25bps cut priced in by August 2019.

After yesterday’s swift decline post the FOMC decision to lift the cash, US equities are seemingly now comfortable with the idea of higher rates with all major indices recovering today. The NASDAQ has led the charge, up 0.61% while the S&P 500 is +0.28% and the Dow is +0.21%. All major European indices also closed with modest gains, although Italy’s FTSE MIB was the exception, down 0.62%.

US yields are unchanged to slightly higher since yesterday’s close and it is  a similar story for much of Europe and for Aussie bond futures. 10y UST yields now trade at 3.05% and the 2y rate is at  2.83%. Of note Italian bonds closed relatively steady only a couple of basis points higher.

Initial jobless claims rose to 214K from 202K (revised from 201K), just slightly above the 210K consensus.  The weather (hurricane Florence) appears to have accounted for the 12K rise, this impact likely to be temporary.

US durable goods orders were +4.5% m/m in Aug, well above the +2.0% consensus; we had +4.5%. Strength was led by the volatile civilian aircraft component.  Ex-transportation orders were just +0.1% m/m, below the +0.4% consensus. The core capex orders series fell, but it had risen sharply in previous months.

US Q2 real GDP was unrevised at a +4.2% q/q annual rate. In line with consensus.

US advance goods deficit jumped to $75.8bn from $72.0bn, well above the $70.6bn expected by consensus. The I mports of goods rose 0.7%, marginally above expectations but exports unexpectedly fell by 1.6%, the third straight fall of more than 1%. All the decline in exports was in the “industrial supplies” component, which includes oil, where exports dropped by 5.9%. While a correction industrial supplies looks likely next month, today’s numbers suggest trade will subtract around 1% to Q3 GDP numbers. That said the inventories data was stronger than expected and leaves exactly what expectations for a Q3 GDP reading around 3% 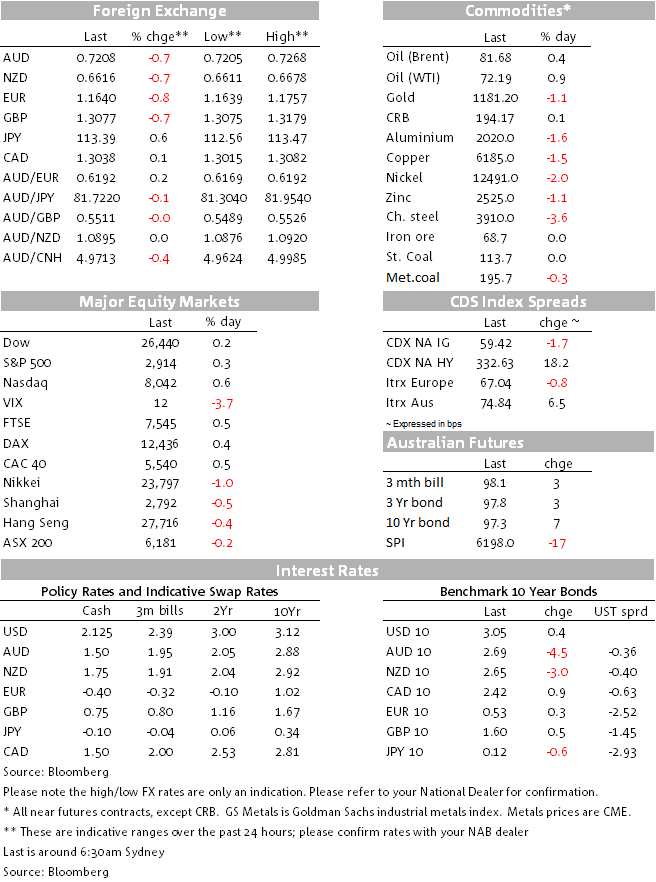 After an initial hint of contagion, European and US equities looked past Asian concerns over China’s regulatory crackdown, closing the day with modest gains at or near record highs. Meanwhile the real story in the rates markets has been the record move decline in the 10y US real rate.

AMW: Vaccinations and the path out of the pandemic

The Sydney lockdown is in its fifth week and looks set to be extended well beyond July 30. Given the high transmission rates of the delta variant, snap lockdowns are likely to remain a ‘tool of first resort’ in controlling the virus until vaccination rates lift.

Strong earnings continue to outweigh Delta concerns with the S&P500 reaching a new record high, So far 87% of companies reporting have beaten expectations and if maintained would be the strongest earnings beat since 2008.