There were big falls in equities in the US and across Europe overnight, with rises in bonds, the Yen, Gold and the Swiss Franc reinforcing the risk-off mood.

While we keep one eye on the final part of the session in the US that won’t be closing until after this note surfaces in your email, it’s been a sea of red for equities in Europe and the US, mainboard European stocks down around 3% and the S&P 500 down, though trying to rally late in the last hour.  US energy stocks are again being beaten up with oil prices back down, WTI and Brent down by 2¼-2½%, WTI mid-session flirting with $50/barrel again when prices were off by around $3/bbl after OPEC/Russia failed to cut a supply reduction deal.

While the overnight session has definitely been “risk off”, the DXY has been losing ground even more so than the commodity currencies such as the AUD.  From where the local session ended yesterday, the DXY is down 0.32% to 97.02, while the AUD is trading at 0.7234, benefiting a little late as US stocks have recovered some lost ground.

Geopolitics, oil and the Dow

It’s mainly been further weakness in oil and the news yesterday that Canadian authorities arrested the CFO of China’s hi-tech company Huawei, Wanzhou Meng, in Vancouver on December 1 that’s unsettled investors that seems to have unsettled investors.  (Having been such an unsettling year for investors, it would be entirely understandable that investors would have much less tolerance to letting bad positions run, but run with tight stop-loss positions on any signs of market fragility.)  Not only is she the CFO, but the daughter of Huawei’s founder Ren Zhengfei and thought to be the next leader for the company.

Whether this arrest stymies next week’s US-China trade talks is unknown, but the arrest of a very senior officer in this prominent Chinese telecoms company raises for the market the importance of the issue in US-China geopolitical terms, given the prominence of Huawei in the US and global markets.

After a cut in OPEC+ oil production of around 1mb/day having been spoken of as a potential/likely outcome of the OPEC meeting overnight, when news came through that an agreement could not be reached, oil prices weakened further.  OPEC could not agree to a proposal from the Saudis that everyone cut production equally, while Russia also did not step up to the plate and also stand ready to cut.  WTI flirted with $50/bbl during the session but it saw some support return on the release of a much larger than expected weekly drawdown in US crude oil inventories of 7.328mb against expectations of a 1.60 draw after last week’s 3.577mb addition.

US data points released overnight – and German factory orders – did not play to the tune of a weakening economy on either side of the Atlantic.  The most prominent US release was the ISM Non-manufacturing index for November that came in at 60.7, up from 60.3 and a consensus expectation of 59.0.  The survey did report qualitative concerns about the potential impact of tariffs and trade tensions, but that theme was not evident in this data set.  Nor was it in the Manufacturing ISM released earlier this week that was 59.3.

Also released, US factory orders were in line with expectations, down 2.1% against an expected 2.0% print, jobless claims were down marginally from 235K to 231K (they have been trending a little higher in recent weeks though), while the goods and services trade deficit was also almost bank on expectations.  Still large at 55.5bn, the deficit was not materially different from the 55.0 consensus and up on slightly stronger imports, not usually seen as indicative of weakness.  ADP employment though as softer at 179K, down from 225K ahead of tonight’s payrolls but it’s far from being regarded as the red-hot predictor of payrolls.

In his write up of Deputy Governor Debelle’s speech to the Australian Business Economists overnight, my London colleague Tapas Strickland has titled his summary as “RBA speech – still on hold, but can cut if circumstances change”.

It’s not surprising at all that all that has was going to be lots of questions about housing developments and implications for the economy, wire stories also well and truly picking up these threads.

To quote from Tapas’s summary, while policy guidance was unchanged, Dr Debelle noted if circumstances do change “there is still scope for further reductions in the policy rate. It is the level of interest rates that matters…can still move lower”.  To be clear, the RBA’s rates guidance is still “the next move in monetary policy is more likely up than down, though it is some way off”. The reference to the scope to cut should be read in the context of underscoring that Australia still has monetary policy ammunition that can be drawn on in future downturns if required.

Debelle restated the RBA’s concerns over the outlook and noted that this is “uncharted territory” where house price falls occur while unemployment is still falling. The RBA accordingly will be monitoring the outlook for consumption closely: “consumption was weaker on the expected, so we just have to see how it goes over the next few months”.        Ongoing uncertainty and softish edge from the RBA this week has seen the market start to price in a small chance of the RBA cutting rates next year. The OIS market now prices a 16% chance of an RBA rate cut by August 2019, while further out the RBA is seen to be on hold throughout 2020.

A note of caution.  John Kehoe wrote a piece in the Fin yesterday cautioning investors from over-reading the softer growth in consumer spending, a pattern of strong-weak-strong-weak quarterly growth, evident also in Q3 that followed a stronger Q2, the type of careful measured take away, not that different from a RBA analytical lens.  Consumption growth was still up 2.5% and ahead of population growth.

With equities in the red, bonds have accumulated more support, US 10y Treasuries down below2.9%, after having tested above 3.20% only last month.  The market is still tilted to expect the Fed to hike again at its December meeting, though the probability has been scaled back somewhat, but more so for 2019 expectations, the market now pricing little more than one rise for 2019.

Oil accumulated most of the attention overnight.  Base metals were softer, gold was steady, while the bulks were also softer yesterday, though coal prices remain elevated. 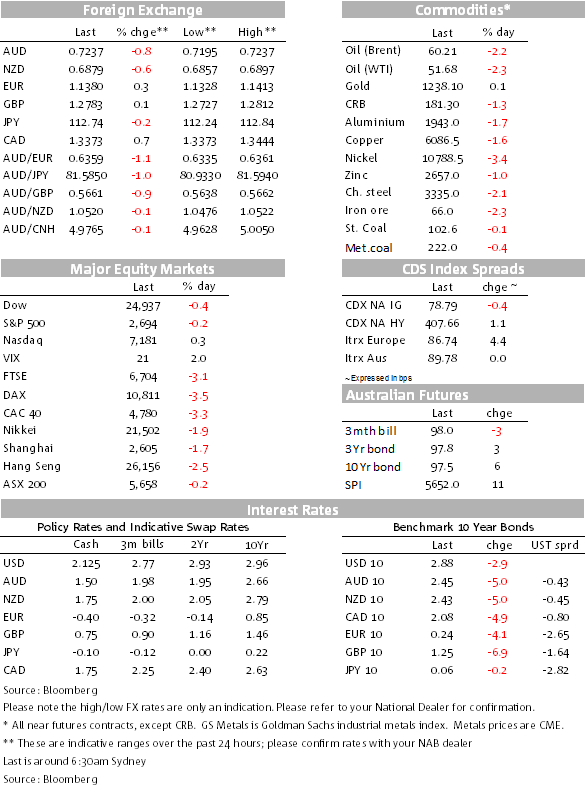