An eleventh-hour deal has has buoyed markets and contributed to increased risk sentiment.

European and US markets have started the week with a risk-on slant, even European stocks managing some net gains despite heavy European bank stocks and another step up in Italian rates as the market re-prices back to a more expansive fiscal setting.  Global bond yields were generally higher, the big mover in commodities overnight was oil (and met coal yesterday), WTI and Brent up around 3%.

There have not been especially big moves in currencies.  The DXY has been drifting, as has the Euro, with commodity currencies outperforming a little, but at 0.7226, the Aussie is only back to territory at the start of the week.  The standout in the past 24 hours has been the Canadian dollar that began appreciating as Canada and the US working towards stitching up a revised NAFTA and then a little further with the announcement that a deal was done in a tripartite arrangement with Mexico.  For Canada it avoids auto tariffs but has apparently given some ground on US access to its dairy markets.

In the last hour, the NZ QSBO Business Survey has been released showing business confidence down from -20 to -30 in Q3, the survey calling out government policy and capacity limits were noted as constraints, cost pressures also evident.  The NZD has dipped 10 pips or so, AUD/NZD trading up to 1.093 this morning.

Italian bond yields re-priced higher as the market moves to price in a more expansionary fiscal stance.  Italian Finance Minister Tria has well and truly become the meat in the sandwich between his political leaders and now-emerging lectures from Europeans over the Government’s revised stance.  “One crisis was enough,” EC President Juncker said at an event in Germany. “After the toughest management of the Greece crisis, we have to do everything to avoid a new Greece – this time an Italy – crisis.”  EU Commissioner Moscovici said he couldn’t see how Italy’s preliminary budget figures would be compatible with the bloc’s rules, noting that plans for a budget at 2.4 percent of economic output is a “very, very significant” deviation from commitments.  (Tria had apparently been pushing his leaders for a 2.0% deficit but been effectively over-ruled.)

For now at least, not only have global markets taken this news in its stride, but even in Europe.

The ISM Manufacturing survey for September was another punchy number, printing at 59.8, down from an even higher 61.3 and almost bang on the 60.0 consensus.  New orders (61.8), priced paid (66.9), and supplier deliveries (61.1) eased, though they remain high.  Notwithstanding the tariffs and Hurricane Florence, the index remained high.  It will be interesting to see how priced paid tracks in coming months on the back of the mid-September 10% tariffs on $200bn of Chinese imports.

Three Fed Presidents have been speaking though without breaking too much new ground.  Atlanta Fed Bostic spoke of job disruptions happening at a faster pace (he’s a FOMC voter this year), while noted dove Minneapolis President Kashkari (not a voter this year) spoke of the dollar’s strength reflecting in part the domestic economy, that some firms are using tariffs to raise prices and that the tax cut hasn’t led to a huge uptick in capex, capex which is being led by oil.  He said also that they are not seeing a big uptick in wages and he cited risks to the outlook as including emerging markets, trade wars and the Fed hiking.  Boston Fed President Rosengren (also not a voter this year) said in response to a question on financial stability that while he doesn’t think “there’s an alarm going off, but I do think there are a bunch of yellow lights”, comments addressed to over-valuations and over-building worries in US commercial real estate.  Powell’s speech tonight will be closely watched and dissected.

As the UK Tory Party Conference continues (May is speaking Wednesday), the UK Manufacturing PMI did a little better in September, up from 53.0 to 53.8.  There was a Bloomberg story that May has been working on a revised approach to the Irish border question (from within the Conference?) but it has not been picked up by other news wires.  Sterling has been little moved.

The big mover overnight in the commodity space has been oil with WTI and Brent both up over $2/bbl (~3%), WTI at $75.47 this morning and Brent at $84.94, the highest since 2014 when oil was on its way down from over $100/bbl in the aftermath of the first phase of the US shale boom.  There’s lots of talk on the wires about supply concerns, not just Iran and Venezuela but pipeline congestion and production issues in the US shale industry.  Even so, US production has pushed up to 11.1mb/day and US inventories continue to trend lower.

Locally, met coal jagged higher at the start of the week, seemingly on the news of a fire at Peabody’s North Goonyella mine that, according to reports will be off line for several months as the company develops plans to extinguish the fire, a difficult task. 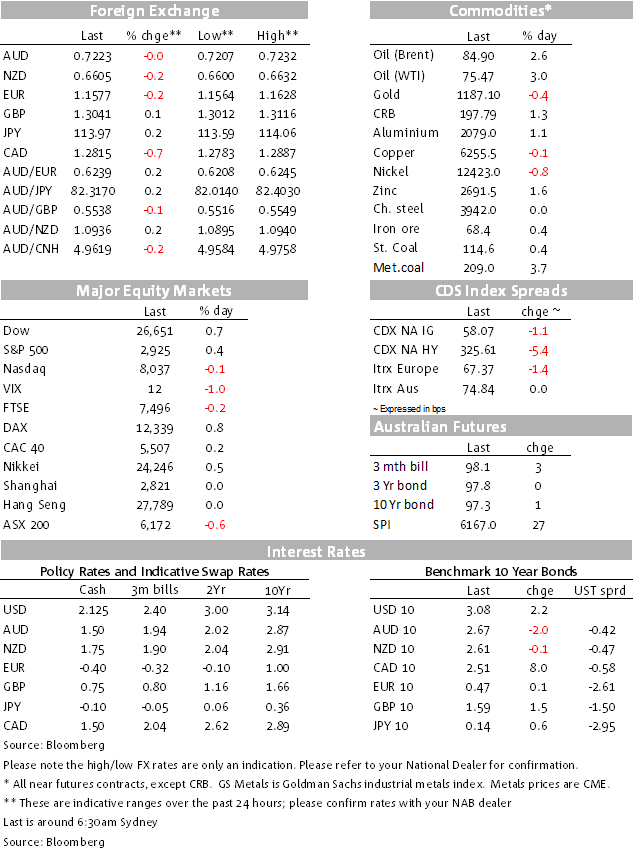