What influence has President Trump’s discontent with the work of Jerome ‘Jay’ Powell had on the markets?

Somebody please hear me cry for help – Rick Astley

After yesterday’s Bloomberg headlines of Trump complaining that Powell has not been ‘cheap money Fed chair’, late in the NY session Reuters published an interview with Trump which served to maintain negative USD momentum. The acceleration in the USD decline over the past 24 hours has contributed to an improvement in risk sentiment across both Emerging and Developed risk markets. China led the gains in equities while US equities flirted with new record highs. Soothing words from EU chief Brexit negotiator have pushed GBP to the top of the leader board and although NZD and AUD have  also outperformed, both lagged other majors. Core yields are higher with UK gilts leading the way and commodities have also joined the party with Zinc and Lead the big winners on the day.

The Trump Reuters interview reinforced the message that President Trump is not happy with the Fed lifting rates. Speaking about Fed Chair Powel, the president said “I’m not thrilled with his raising of interest rates. No, I’m not thrilled. We’re at a – we’re negotiating very strongly – I don’t call it a trade war – we’re negotiating very powerfully and strongly with other nations. We’re going to win. But during this period of time, I should be given some help by the Fed.”

Prospect of a potential truce between the US and China trade quarrel and President Trump public dislike for higher rates have contributed to a sharp change in the USD fortunes in the past few days with USD weakness accelerating in the past 24 hours. In index terms the USD is down about 0.5% against the majors ( DXY -0.66% , BBDXY -0.44%) whilst against Asia FX the USD is down 0.17%.

Looking at the DXY index in more detail, after peaking just under the 97 mark last week, the index now trades at 95.237 and although there is a little bit of a base around the 95 mark, the index looks like it is heading back towards its previous range of 93.5-to 95.5. The break higher in the euro above the 115.20 area is a crucial driver for the recent USD decline, the euro now trades at 1.1571, after briefly trading above 1.16 overnight. The improvement in the prospect for a truce in the US led trade tensions alongside an ease in concern over Turkey (temporary?) and Italy have also contributed the rebound in the euro. So, higher looks to be the path of least resistance for the euro with a move back to the 1.15-1.18 broad range the likely outcome.

GBP has also been heading higher, up 0.84% over the past 24 hours and now trades just above the 1.29 mark for the first time since the 9th of August. The pound was boosted by soothing words from EU Chief Brexit Negotiator Barnier noting that negotiations were entering their final stage and discussions would occur “continuously” from now on, with talks wrapped by roughly October or several weeks later. So on the day GBP is stronger however is worth noting that as much as Barnier believes negotiations will be reached later this year, he also emphasised that the principles and rules on which the EU is based will not change. Essentially this means to us that the only way a deal will be reached is by a shift in the UK position, we still expect GBP to remain volatile.

The NZD has been on an upward trend since reaching a nadir a week ago, now some 1½ cents higher from that level and taking a peek above 0.67 this morning, before settling around 0.6691. The market ignored the weaker than expected GDT dairy auction.  It showed average prices falling by 3.6%, with broadly-based price falls across products, and raising the risk of Fonterra downgrading its projected milk payout for the current season.  NZX dairy futures show an expected payout for FY19 close to $6.60, well down from Fonterra’s current $7 projection.

The AUD rose up through 0.7380 but has slightly underperformed the NZD, leaving the  AUD/NZD cross at 1.1006, about 50 pips lower relative to yesterday’s levels. So both antipodean currencies have lagged the move higher by other majors against the USD. Soft data and prospects of a more dovish RBNZ has weighted on the NZD recently and based on the AUD performance over the past 24 hours against a backdrop improved risk sentiment and higher commodities, it would seem that the domestic political uncertainty has been a hindering factor for the aussie.

Yesterday the Shanghai composite closed 1.31% higher and the positive lead from Asia was embraced by Europe and later by the US with all major developed equity indices posting gains for the day. The UK FTSE100 was the one exception, down 0.34% mired by the strong GBP’s performance.

The S&P 500 Index recorded a fourth day of gains, briefly rising to an intraday record high. S&P 500 is up more than 7% this year with consumer discretionary and IT leading the gains, both up just over 15% while  health-care companies have posted gains close to 11%.

The better risk backdrop initially weighed on bonds, sending US Treasury yields 2-3bp higher across the curve, but the market has since recovered. Moves are limited in the wake of the short squeeze seen yesterday. That said as we are about to press the send button, 10y UST yields have declined a couple bps and now trade at 2.829%.

Dallas Fed President Kaplan wrote an essay indicating that he would favour a pause in the rate-hike cycle once a neutral rate is hit, which is about 3-4 hikes away.  He would also be “carefully watching the US Treasury yield curve”, echoing the sentiments expressed by Bostic yesterday.

US Commerce Secretary Ross indicated that the White House had pushed out the timetable for auto tariffs, saying that the delay was “in view of the negotiations” ongoing with the European Commission, Mexico and Canada.  He declined to set a new timetable, but noted that the law used to justify the report into potential security threats posed by the auto sector doesn’t require any findings until next year.

Trump’s lawyer said that he violated campaign laws at direction of unamed candidate. In acknowledging the charges against him, Cohen said he was directed to violate campaign law at the direction of a candidate for federal office. At the same candidate’s direction, he said he paid $130,000 to somebody to keep them quiet, which was later repaid by the candidate. He didn’t identify the candidate or the person who was paid, but those facts match Cohen’s payment to Clifford and Trump’s repayment (Bloomberg). 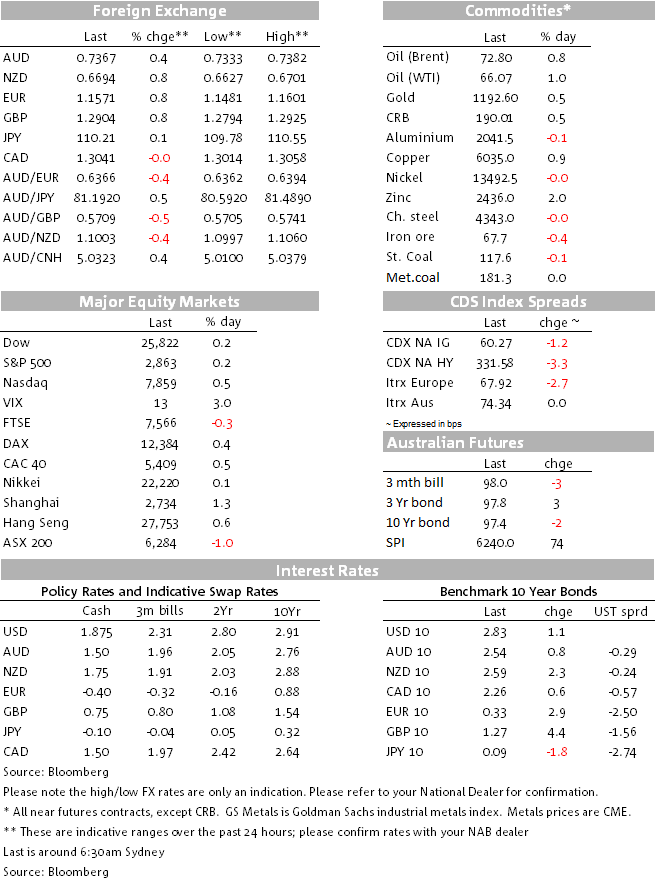