Early in the session the fire-sale of $20 billion of stocks held by Archegos Capital was all everyone was talking about.

Overview: Shake it off

“But I keep cruising; Can’t stop, won’t stop grooving; It’s like I got this music in my mind; Saying it’s gonna be alright”, Taylor Swift 2014

The liquidation of Archegos Capital has not had an enduring impact on risk sentiment with little contagion evident outside of single names with a clear turnaround in equities after the negative lead from Asia. The S&P500 is almost in the green at +0.0% after S&P futures in Asia were trading down almost as much as -0.8%, and European equities closed in the green with the Eurostox50 +0.4%. While Nomura (-16%) and Credit Suisse (-13%) have reported large potential losses from a “ a significant U.S.-based hedge fund [who] defaulted on margin calls made last week”, other banks have noted they have avoided significant losses. So far the total selldown has been in the order of $30bn.

There does not appear to be heightened counterparty risk amongst the banking sector with the S&P500 bank sub-index down a modest -2.0% compared to the sharp falls seen in Nomura and Credit Suiise. Instead risk sentiment has been supported by a trio of headlines of: (1) Biden accelerating the vaccine rollout again – now 90% of U.S. adults will be eligible for Covid shots by April 19; (2) the mooted US $3 trillion infrastructure package being upsized to $4 trillion – details to come on Wednesday; and (3) the Suez Canal re-opening for business following the full re-floating of the Ever Given with ships again sailing through, though the backlog may take a week to clear.

Yields took their que from the rebound in equities with the US 10yr yield +3.4bps to 1.71% and lifting off their intra-day low of 1.63%. Overall yields remain in broad consolidation, but notably are not that far off their recent high of 1.75%. Implied breakeven inflation rates have done most of the heavy lifting over the past week with the 10yr breakeven at 2.36% compared to the 10yr TIP yield at -0.66%.

The Fed continues to take a positive view on yield developments with recently appointed Fed Governor Waller overnight stating the current yield rises are “what should happen when an economy improves” and that we are “a long way from raising interest rates at this point”. On inflation, he noted the Fed would be looking at inflation expectations to guide them in whether inflation overshooting potentially spillover into unwarranted inflationary pressure: “ I would be concerned if inflation expectations were to suddenly become unanchored to the upside. That would signal something about overheating”.

As for the supersized US infrastructure package, the Washington Post notes that new spending could be worth as much as $4 trillion (up from $3 trillion), but with the new spending to be funded by tax increases worth around $3 trillion (see Washing Post for details ). President Biden is set to unveil details of his infrastructure proposal on Wednesday. It is still unclear to what extent such a package can be passed if it is funded by tax increases given the Democrats only have an effective majority in the Senate via the Vice-President. Later in April another package focused on health and family care will be unveiled. Markets so far seemingly are discounting a lot of the proposed headlines given the Senate make-up.

Vaccine news remains encouraging and continues to allow risk markets to price the other side of the recovery. President Biden has seemingly accelerate the vaccine timeline again, stating 90% of adults will be able to be vaccinated by April 19. CDC data shows 72.8% of those aged over 65 years have had one vaccine shot and 49.2% have had their full two doses. The acceleration the rollout is welcome with the CDC also warning that a fourth wave of COVID19 might be sweeping across the US, with the rolling 7-day average of new cases pushing up to over 63,000, the highest level since 4 March, while hospitalisation rates are climbing in half of the US States. The step-up in vaccination rates could see the latest wave of cases brought under control.

Finally in Australian news, APRA Chair Byres pushed back on notions of tightening macro-prudential in the near-term. In Senate testimony yesterday he noted: “It’s not our job to solve house prices and its nor our job to solve house pricing affordability. The extent to which there is dynamic emerging of increased risk taking by the community … at this stage it’s not evident,” and “ The last statement from the Council of Financial Regulators said quite clearly we are watching for a deterioration in lending standings and that’s not evident at this point, that is not to say it won’t emerge but it’s not obvious at this point. We are watching with our fellow regulators” (see AFR for details).

A quiet day for Australia with only ABS Payrolls and Consumer Confidence. It is also quiet offshore with only German Flash CPI figures of much interest. Details below: 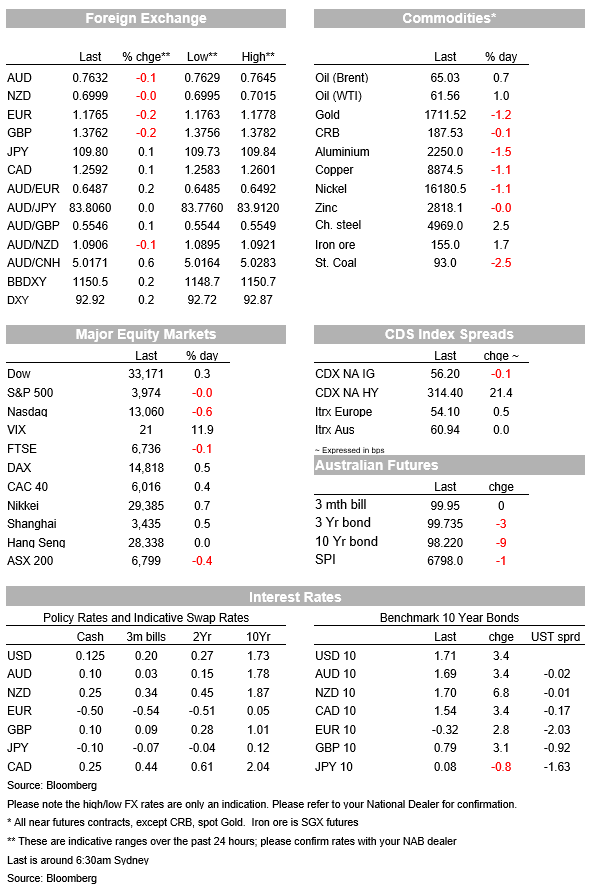